It took the better part of a half hour, but eventually the heroes, lead by that insufferably badass genie, breached my Sinister Sanctum and ended my Tyrant’s reign of terror. Then I cackled in evil glee as I watched them rewarded for their heroism with a pile of bricks to the head as my entire dungeon collapsed on them. With the tomb filled in by the bodies of my fallen minions and a good four dozen heroes, a new Tyrant set up shop. The cycle began anew. 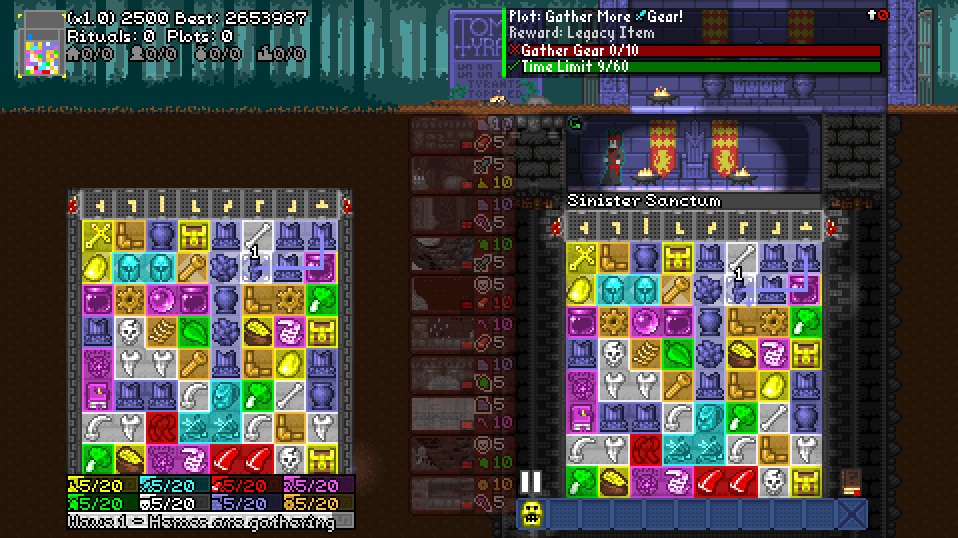 Every game starts with that all important first move.

Tomb of Tyrants is an easy to learn, impossible to master mix of ‘match-four’ style puzzle game and strategic defense from developer Jake Huhman. The player is tasked with digging an ever deeper underground tomb by gathering resources (basic matching), performing rituals (matching ever more elaborate patterns of one color), and successfully pulling off plots (small challenges given to you at random by the game). As evil tasks are performed, you’ll be rewarded with resources you may use to purchase different floors. Each new floor gives the player a few new minions, a fiendish trap to spring on adventurers, or some sort of bonus. As you play you’ll also find items and earn special legacy floors and champions to make your dungeon that much nastier.

The goal is simple: dig as deep as you can as fast as you can and then fill your dungeon with traps, monsters, and items to slow the waves of heroes attempting to kill your Tyrant. Adventurers gather in greater and greater numbers, forming parties and fighting their way down, getting a little rest every four floors, which you’ll actually appreciate because it buys you some time, secretly the game’s most important resource. In the early stages the best way to stay alive is to put floors between you and the invaders, but you’ll soon find that killing the toughest enemies before they kill too many of your minions takes a bit of thought.

You want to kill good guys, and you will. A lot of them, and in a surprising number of gruesome, pixelated ways: from leaving punji stakes for them to step on, to hoards of monstrous creatures, to devices that mash and maim them. The longer you survive, the deeper your murder-factory becomes, until you’ve essentially created an automated hero killing machine that mostly only requires you to reset traps and replace fallen minions. 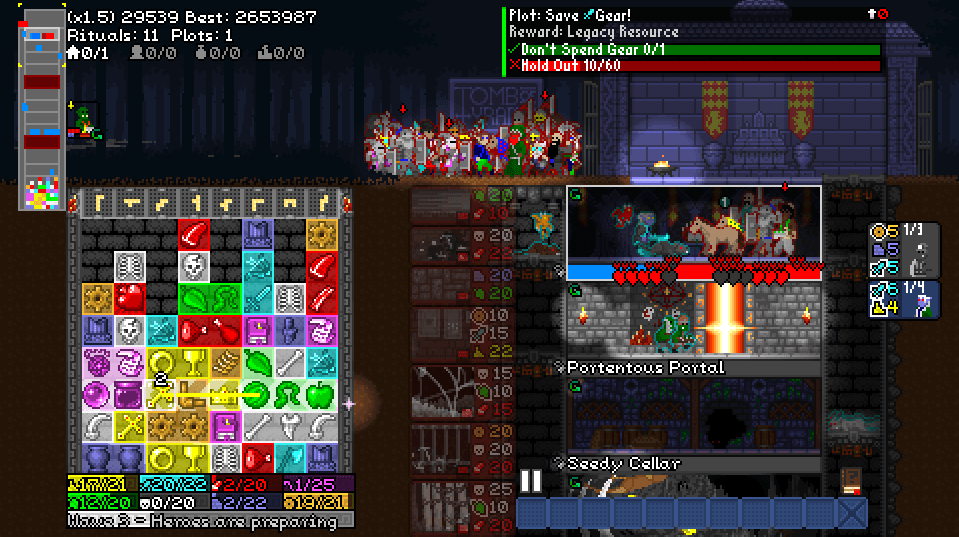 The cocky phase passes pretty quickly though in the face of the game’s exponentially increasing difficulty. While the first phases unfold straightforwardly, careful selection of rituals and plots is critical as you build your dungeon’s foundation because the game won’t stay slow for long. The learning curve becomes steep, fast. A gentle, tactical experience becomes a frantic click-fest as you desperately try to stop the parties of do-gooders from reaching your villain’s Sinister Sanctum by throwing every minion you can at them.

It’s never enough. Eventually the game throws enemies in the dozens at you, along with specialty enemies that can disable your traps and high-level enemies who can wreck even your best champions. In the end you will fail and be killed, but the game rewards you by letting you watch the tower implode and destroy every would be hero left, which is strangely satisfying. You’ll also unlock a few flags that can improve your chances by bestowing small improvements and keep an item or two from your last game if you’ve performed the right plots, making the next play easier — and you’ll probably want to play again.

Tomb of Tyrants is a “losing is fun” game, and I found myself eager to start again immediately after dying (“OK, GOBLINS this time… and lots of traps.”) 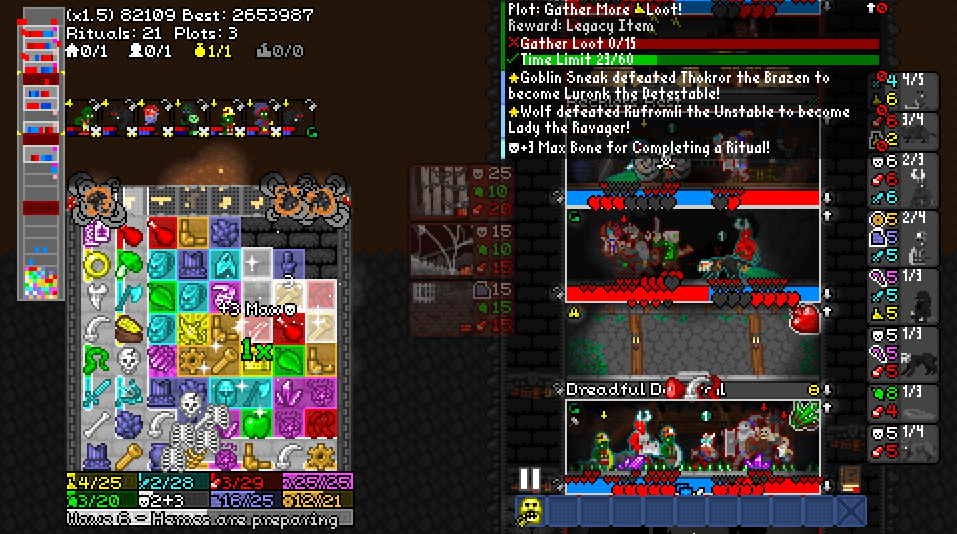 Things get out of hand pretty quickly, but in a good way.

While the game was released feature complete at the end of June, developer Jake Huhman has released over twenty patches since, featuring content updates, fan requests, improvements, and five new floors — an impressive show of indie developer work ethic on an eight dollar title.

Huhman is in constant contact with his fans, and most patches are peppered with fan suggestions, along with his own constant re-balances. The attention to detail shows, from the cheerfully evil retro-inspired pixel art to the play balancing (and constant nerfing and rebalancing) of the floors, flags, and items. Many developers launch a title and then abandon it; Tomb of Tyrants’ release has not been handled that way, and the game is arguably better for it. I wish more devs did the same.

Is Tomb of Tyrants perfect? No — it gets frantic in some places where I feel like I should have more time to think, a few of the heroes can be overpowered, and I hate the fact that my Tyrant is such a wuss, but there aren’t many games under ten dollars on Steam that I’ve gotten 27 hours of play time out of.

Beyond that, any game with a developer who stewards their creation can’t be all bad. So if you like frantic puzzle gameplay, strategy defense, “losing is fun” games, or just want to spend 20 minutes to a half an hour being the bad guy, you’ll probably enjoy Tomb of Tyrants.

Tomb of Tyrants is available now for PC.