Feminists are in meltdown following the successful funding of The Red Pill, a documentary about the Mens’ Rights Movement by award winning filmmaker Cassie Jaye. How awful!

The documentary’s Kickstarter project was successfully funded last week. Following an article by yours truly, campaign donations surged. The movie sailed through its original goal of $97,000, and now — as icing on the cake — it is likely to exceed the amount raised by Anita Sarkeesian’s Tropes vs Women in Video Games, a series that had the entire weight of the progressive media behind it. Not gonna lie, I am enjoying the spectacle enormously.

Although Jaye is an accomplished filmmaker, with two award-winning documentaries under her belt, she was forced to turn to Kickstarter after her original backers abandoned her.

Grants and institutional support were revoked after Jaye signalled that her documentary would not be a hit-piece, but instead a fair-minded assessment of the men’s rights movement. Jaye told me: “We weren’t finding executive producers who wanted to take a balanced approach, we found people who wanted to make a feminist film.”

But now, with a little help from the internet — and your friendly neighbourhood homo — Jaye’s documentary has been fully funded. Needless to say, the feminists who hoped The Red Pill would never see the light of day are not pleased.

Chief among them is David Futrelle, a man who, ironically enough, can only be described as the very embodiment of pejorative stereotypes usually slung at men’s rights activists. He’s also known by his online handle, which is — I promise I’m not making this up — “Manboobz.” For years, his existence has been defined by a terminally furious blog, “We Hunted The Mammoth,” where he obsessively chronicles the activities of the men’s rights movement, trying to convince an ever-dwindling audience that MRAs are a greater threat to civilization than the aliens in Independence Day.

Futrelle is apoplectic that Jaye’s film has been funded, and even more upset that she is not persuaded by his repeated entreaties to see the men’s rights movement for “what it really is.” Although Jaye extended an offer to Futrelle to explain his perspective on the movement for her documentary, Futrelle publicly threw his toys out of the pram in a long-winded screed about why he refused.

A feminist refusing to debate and preferring to hurl insults from the comfort of his living room? Who’d have thought it.

Futrelle has since extended his attacks on Jaye, falsely accusing the filmmaker of lying about her track record of awards. Jaye won an award at the Cannes Independent Film Festival; Futrelle thinks she’s a liar because the name is too similar to the more well-known Cannes Film Festival. Seriously.

Feminists aren’t just upset that a fair documentary about the hated men’s rights movement is going to be released. What really terrifies them is Jaye’s own story: she was a feminist who intended to make a “fly-on-the-wall” documentary about activists like Dean Esmay and Paul Elam, in much the same way that she had profiled the U.S abstinence movement.

Instead, she discovered her own beliefs were changing, and now the documentary is about her personal journey as well as the movement itself. Feminists are shocked, angry, and afraid that one of their own could see men’s rights advocates as anything less than pure evil, so they’re doing all they can to ensure that Jaye’s story never reaches a wider audience.

Public mood is shifting, and progressives don’t like it one bit. This undercurrent of panic and disbelief can be seen in many of the comments prominent feminists have made on social media. 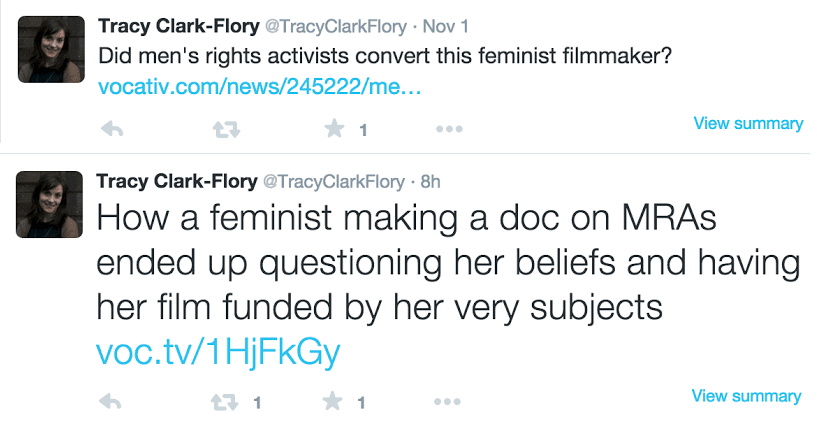 Modern feminists and social justice warriors go to absurd lengths to prevent their critics’ arguments from being heard. They will claim that university speakers are “dangerous” to students in an attempt to bar them from campus events. They will pull fire alarms and call in bomb threats to events where their opponents are speaking. They will abuse the reporting features on websites like YouTube and Twitter to censor their opponents on the internet.

Underlying this reckless panic is fear: fear that their own arguments will not stand up to scrutiny, and fear that the arguments of their opponents will win over impartial onlookers.

Cassie Jaye is the personification of that fear. She’s a fair-minded, award-winning, independent feminist filmmaker who actually talked to feminism’s greatest critics, and — confirming the worst fears of social justice warriors — had her views changed as a result.

Jaye declined to comment for this story but she has in the past noted that the allegations her film is “MRA-funded” are nonsense. She says her Kickstarter backers come from all sides of the political, social and sexual spectrums.

Despite their best efforts,  feminists will not be able to prevent her story from reaching an audience. Jaye has raised enough to host her own Oscar-qualifying screenings of The Red Pill in LA and New York. All the loonies have left is impotent rage and an increasingly disillusioned public who, it seems, are keen to hear the other side of the story.