News of James Comey’s firing dominated social media this evening, as commentators and members of the public gave their thoughts on President Trump’s removal of the FBI director. 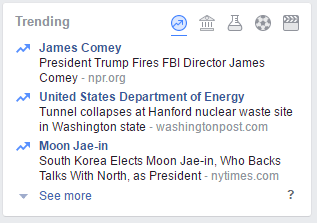 Twitter was also dominated by the topic, with “Comey,” “FBI Director” and “TrumpRussiaInvestigation” trending as the top three topics in the United States. 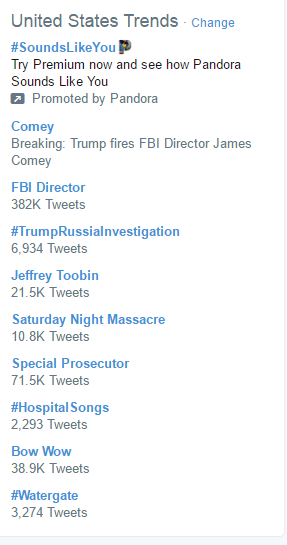 Democrats were quick to tie the firing to their conspiracy theory about the President having improper ties to Russia. Failed Democratic presidential candidate Hillary Clinton previously blamed James Comey and his decision to reopen the “emailgate” investigation late in the campaign for her defeat by Donald Trump. Now the Democrats seem to be Comey’s best friend.

If we don't get a special prosecutor, every American will rightfully suspect that the decision to fire #Comey was part of a cover-up.

Comey should be immediately called to testify in an open hearing about the status of Russia/Trump investigation at the time he was fired.

Trump fires FBI Dir Comey. Maybe he was getting too close to the Russia connection?

Hearing from a number of quite non-partisan long-time law and order, prosecutor/FBI types who are *freaked the eff out* by this firing.

The WH has made the calculation that however bad this looks, it's better than letting Comey continue to supervise the investigation.

Senate Republicans, you will be judged forever by how you check this abuse of power by a lifelong Democrat who took over your party. https://t.co/pD00zSuXzv

NSA whistleblower Edward Snowden called on “every American” to condemn the “political interference” in the FBI’s work.

Set aside politics: every American should condemn such political interference in the Bureau's work. https://t.co/hROwSMg1vd

This FBI Director has sought for years to jail me on account of my political activities. If I can oppose his firing, so can you. https://t.co/zUp5kquy8q

Others, like conservative author Dinesh D’Souza, were more positive about the President’s decision.

I hear crime syndicates worldwide are all awaiting the opening of the law firm COMEY, LYNCH, HOLDER & BHARARA

Comey's firing will be an extraordinary boon for transparency as his loyalists leak and the admin counter-leaks. Will he run for 2020?

Others, including Breitbart editor-in-chief Alex Marlow, highlighted the irony of Democrats complaining about Comey’s removal when they themselves had the FBI director in their sights following Hillary Clinton’s loss to Donald Trump, which some (including Hillary) attributed to Comey’s decision to reopen the “emailgate” investigation in October.