Twitter recently announced that it would be hiring a group of academics to evaluate “conversational health” on its platform. Unsurprisingly, these academics include anti-trump leftists.

Following a decision to focus on the issue of toxicity on their platform, Twitter decided to hire groups of academics to focus on the issue. Following a lengthy review process, Twitter has chosen two research teams to focus on two different problems. The first team is from Leiden University and will analyze how “echo chambers” form on the platform, and what sort of effect they have. They will also attempt to analyze the difference between incivility and intolerance during a conversation which will help Twitter to better understand how their users are interacting.

The second research team is from the University of Oxford and is led by Professor Miles Hewstone and John Gallacher, in partnership with Dr. Marc Heerdink from the University of Amsterdam. This group will continue work started by Professor Hewstone who has studied intergroup conflict for some time, this will help the platform to examine conversations on their platform with the view of removing prejudice. Hewstone’s research shows that when conversations include more positive sentiments, cooperative emotions, and complex thinking, prejudice tends to go down while the quality of relationships increases.

Breitbart News has now discovered that many of these newly employed academics who will be helping Twitter to improve their “hate speech” rules and measuring “conversational health” on the platform are anti-Trump leftists. Rebekah Tromble, the Assistant Professor of Political Science at Leiden University, has posted a number of anti-Trump tweets:

Trump quintupled down on his commitment to white nationalists. They're just about all he's got left. Bannon ain't goin nowhere. https://t.co/qkg7mKx7vw

The assistant professor also tweeted her support of the anti-Trump Women’s March in Washington DC:

But when President Trump appointed female members of his cabinet, this apparently also wasn’t enough to appease Tromble:

Trump appoints two women–TWO ♀in a sea of white men–and suddenly he gets credit for diversity?? Come on, @nytimes. https://t.co/exBWMXucIR

Tromble wrote an article for the Washington Post in 2016 that claimed that Hillary Clinton “faces a barrage of negativity and a heavy dose of sexism on Twitter” at the hands of Trump supporters.

Tromble isn’t the only academic now working for the platform to show anti-Republican bias, Patricia Rossini from Leiden University has posted similar tweets to Tromble.

Rossini has also been quick to let her Twitter followers know how to determine if someone is “mansplaining,” a slang word used to describe when a man is being condescending. As usual, the left can’t simply use the pre-existing word “condescending” but instead have to create the new gendered word “mansplaining.” 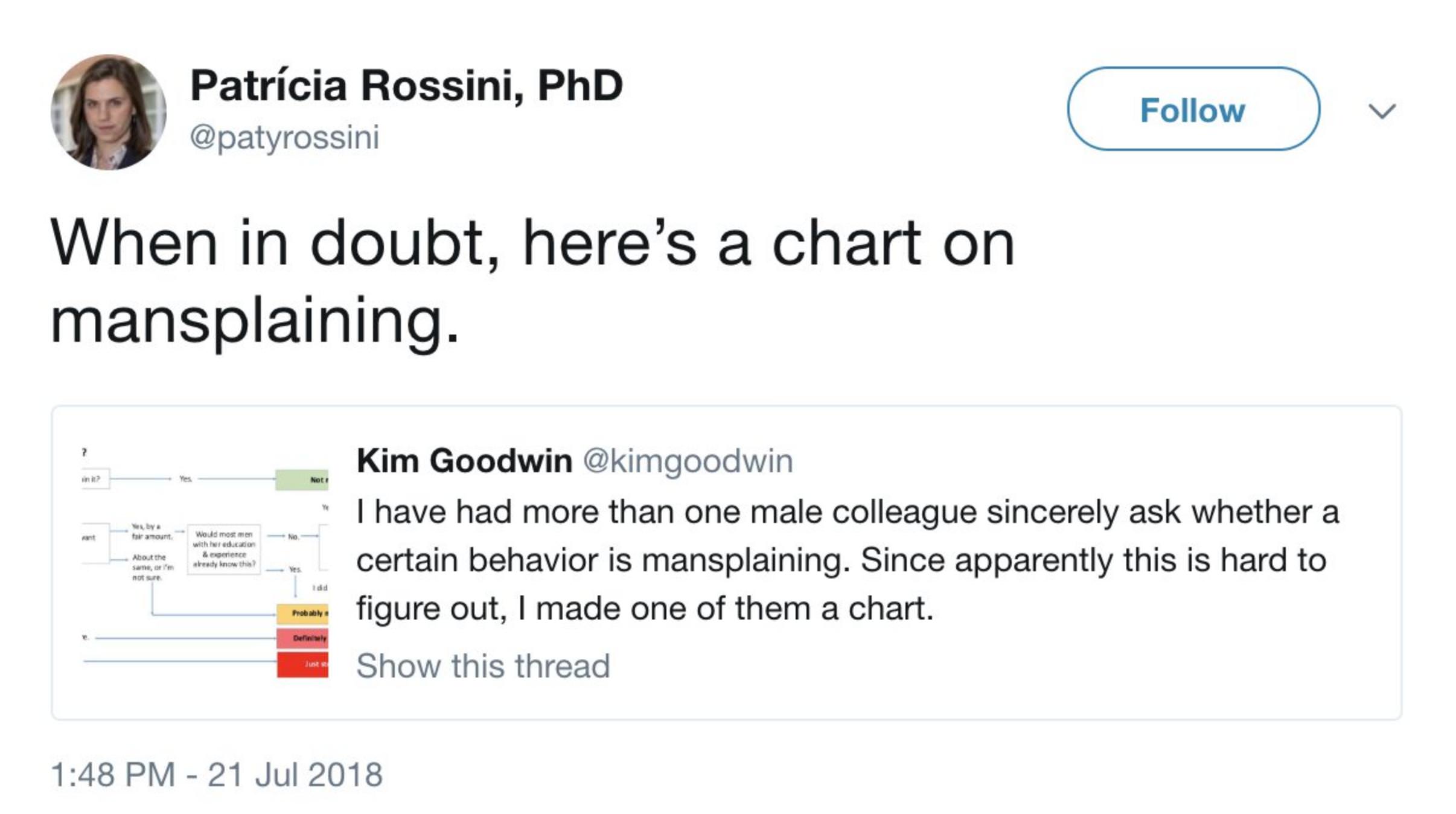 Jenny Stromer-Galley from Syracuse University has a similar history of anti-Trump tweets:

Trump looks cruelty in the face and demands more of it. Time's cover captures that well. https://t.co/E3VJWudELd. The executive order is not a solution. Constant vigilance is still needed.

Stromer-Galley also accused Facebook of being “embedded” with the Trump campaign:

Is this any surprise given that Facebook was basically embedded with the Trump campaign helping them perfect online advertising via Facebook's tools? https://t.co/nuxJsaSQ8z

She has also claimed that Cambridge Analytica worked with the Trump campaign to publish fake news on Facebook’s platform:

The dots I have been connecting the last two days as I research my book were already connected by others: Trump's 2016 digital team and Cambridge Analytica helped the Russians figure out who to target in their fake news campaign on Facebook: https://t.co/NFifZm6TMp

Stromer-Galley seems to be particularly obsessed with the President’s state of mind:

I'd be curious your thoughts @jenmercieca at his assessment of Trump's habits of mind: https://t.co/Tultctretg

A reminder of the president's habits of mind: https://t.co/2FkZdCNDQw

These are the academics that Twitter has chosen to entrust with analyzing conversations on their platform and helping to shape Twitter policy. Given Twitter’s history of censoring conservative voices, these academic picks are not too surprising.