Facebook added a label to a post on Breitbart News’ page trying to persuade voters that mail-in voting has a “long history of trustworthiness,” citing a “bipartisan” think-tank from the D.C. swamp. The social network added the note underneath a post from Breitbart containing a livestream of President Trump’s rally in Lumberton, North Carolina.

“Voting by mail has a long history of trustworthiness in the US and the same is predicted this year. Voter fraud is extremely rare across voting methods (Source: Bipartisan Policy Center),” reads Facebook’s label on the Breitbart News post. 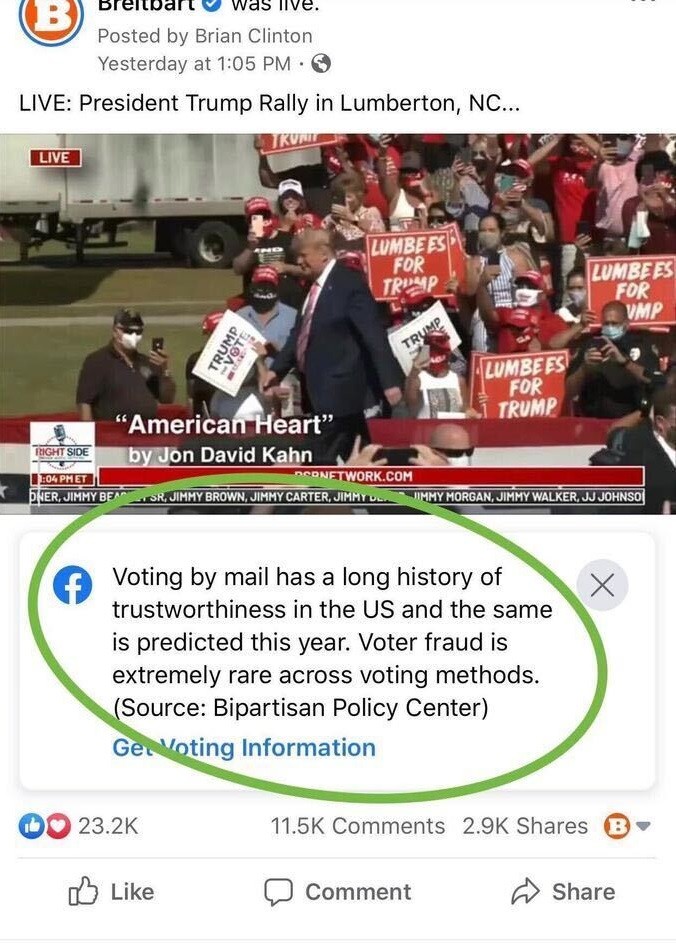 Instead, a Facebook spokeswoman pointed Breitbart to a post from Mark Zuckerberg explaining the company’s efforts to, among other things, stop “misinformation” about voting from going viral on the platform.

The Bipartisan Policy Center, the source cited by Facebook in its note, is an establishment think-tank whose founders included Tom Daschle, George J. Mitchell, Bob Dole, and Howard Baker.

While the BPC did release a report calling voter fraud “extremely rare,” it also published a report warning that the large numbers of mailed ballots in 2020 could overwhelm the system. Facebook did not emphasize that in its note. The think-tank called it a “threat to election legitimacy.”

The tabletop exercise narrowed in on the three legitimacy threats that we see as most concerning heading into November: a tsunami of absentee ballots; staffing shortages; and unexpected issues with reporting and counting the vote.

Political parties, candidates, and others are inundating voters with paper absentee ballot requests that, when returned at the volumes expected, are likely to swamp some smaller elections offices where the process must be handled by hand. If many of these requests come into elections offices near the deadline to request an absentee ballot, it is possible that elections offices may not be able to process them fast enough to get ballots to voters, even when they technically meet statutory deadlines. Statutory deadlines that for years have left election administrators scrambling as they close in on Election Day are simply no longer feasible at a certain volume of requests.

There have been numerous reports of issues with mail-in votes as the election has drawn closer. In September, the FBI announced it was investigating an incident in a key Pennsylvania county after it was discovered that mail-in votes for President Trump had been discarded. In the same month, mail containing ballots in the swing state of Wisconsin were found discarded by the side of a road.

A Democrat insider who spoke to the New York Post has claimed that Democrats are sometimes assisted by anti-Trump USPS workers who throw Trump votes in the garbage. Earlier this month, a mail carrier in New Jersey was arrested for allegedly dumping mail that included 2020 ballots.