Think Progress, a project of John Podesta’s Center for American Progress Action Fund, has been fiercely pushing a story about leaked emails that suggest the U.S. Chamber of Commerce was aware of espionage work being performed against American citizens by one of its private security firms. The story first launched a few days ago as an exclusive on the progressive blog, when it reported that hacked emails obtained from the pro-WikiLeaks group “Anonymous” reveal that the US Chamber conspired to sabotage opposition progressive activist groups including ThinkProgress, Change to Win, SEIU, BradBlog and StopTheChamber, among others. By this morning, the story was all over the lefty blogosphere, on sites such as AlterNet, Huffington Post, Raw Story, and in a press release from Kevin Zeese, our fan from IndictBreitbart.org. 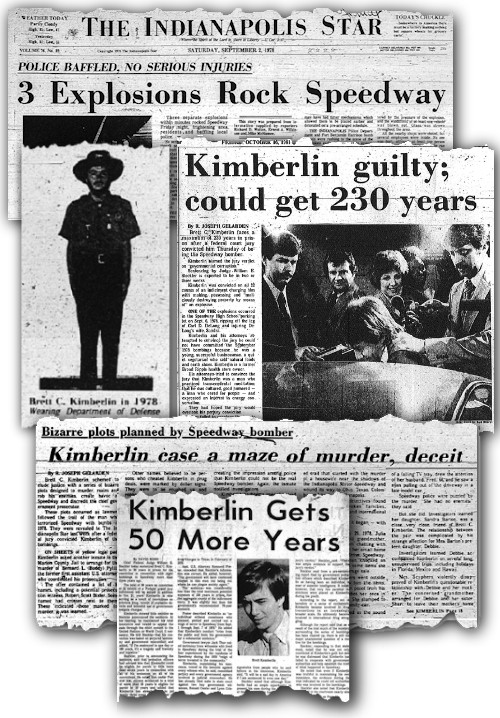 But the reports are noticeably silent on one crucial component of the story.

The primary focus of the Chamber’s investigation was actually none other than the organization known as Velvet Revolution, and one of its co-founders, Brett Kimberlin.

Recognize that name? That’s because we told you all about this convicted domestic terrorist, known as the Speedway Bomber, who in 1981 was finally convicted of a week-long bombing spree in Indianapolis, IN in which eight separate bombs caused extensive property damage, destroyed a police cruiser, and severely maimed a man, eventually leading to that man’s suicide. In short, a community was terrorized for a week, and a potentially indirectly related murder remains unsolved today. Indiana certainly remembers Brett Kimberlin.

As it turns out, despite the months of deafening silence on the left in response to questions about the ally they’ve so warmly embraced, some bigger characters apparently had taken notice.

HBGary Federal, Palantir, and a third security firm, Berico Technologies, were recruited by the law firm Hunton & Williams to prepare a proposal for Bank of America, which is rumored to be the subject of an upcoming megaleak of sensitive documents from WikiLeaks. The firms also did work on behalf of the U.S. Chamber of Commerce to research its critics that would help to “discredit” and “shame” them.

Those critics they mention? Those would be Velvet Revolution and its coalition of allies, like ThinkProgress and Change to Win/SEIU, who had been pounding on the Chamber of Commerce for months upon months. It turns out that the same data intelligence firm gearing up to tackle WikiLeaks was also investigating the political opponents who’d been responsible for the months of anti-Chamber smear jobs. The same folks spearheading the IndictBreitbart.org campaign.

In their zeal to go after the thugs who shamelessly peddled lies about the US Chamber and spread the now disproven myth that the organization was flooding foreign money into US elections, it appears that HBGary Federal may have crossed a line. In return, the firm became the unwilling target of the very attacks against which they purport to protect big companies and government agencies.

Last week the loose hacker group Anonymous released a set of more than 40,000 emails from HBGary Federal, the security firm whose servers it hacked earlier this month. One of the files in those emails was a PowerPoint presentation that described “the WikiLeaks Threat,” created by a group of three security firms that suggested Nixonesque tactics for sabotaging the site on behalf of Bank of America, including spreading misinformation, launching cyberattacks against it, and pressuring journalists.

Over the weekend, the loose hacker group Anonymous published another 27,000 emails from HBGary Federal’s sister company HBGary, and also created a search engine for those documents on its WikiLeaks-like site, Anonleaks.ru.

In those 27,000 leaked emails lie plans to go after journalists like Salon.com’s Glenn Greenwald for supporting WikiLeaks. Also included are several others that contain some names you may recognize from our Velvet Revolution expose, like Brad Friedman and Brett Kimberlin.

Think Progress is touting these leaked emails, because a few of their own are targeted in them. And as important as it is to expose some of the questionable activities that were occurring behind the creepy walls of HB Gary, our friends on the left seem to be selectively editing said leaked emails. As Patterico has posted today:

Think Progress mentioned only Brad Friedman in their post. But that e-mail they took a screenshot of? Here’s how that e-mail begins:

This is the e-mail that describes Kimberlin as having “a bit of a checkered past and has been associated with some more radical and violent activities,” while describing Friedman as “much more mainstream” and someone who “can often be seen on many of the political talk shows.” You can click the image to read all of this.

If you want to see the entire e-mail, with appropriate redactions of personal information, you can see it here. Anonymous has put the hacked e-mails online, and they can be searched here. (I could give you a direct link to the unredacted e-mail, but I won’t.)

The salient point is this: there is not one word about Kimberlin in Think Progress’s post, even though Kimberlin was clearly the Chamber’s primary focus.

Another interesting detail I noticed? Of the dozens of leftist websites discussing this story and displaying the set of leaked emails, most appear to selectively provide those emails beginning after a crucial email. This establishes that the information is most definitely out there. 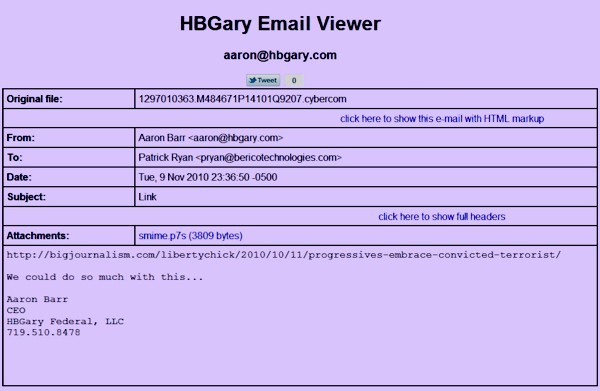 Now, did I have any idea some intelligence firm would stumble across this post and use it in their work? Of course not. (If I had, I might have asked for some cash!) But when I saw this email above as one preceding the set of hacked emails to which some lefty sites are linking, I found it suspicious there was not one mention of the other half of Velvet Revolution. Anywhere.

The research included in the Kimberlin post relies entirely upon direct sources of public record, such as respected publications, court documents, and relevant book excerpts. It is an accurate history of the events of that case.

Meanwhile, Brad Friedman of BradBlog, one of HBGary Federal’s targets, took to Democratic Underground to put out a cry for help. The herd responded.

In the end, I don’t agree with what HBGary Federal did or how any of the firms involved have handled this. Having been a target of such attacks myself of numerous occasions, I might have actually shared some common ground with folks like Brad Friedman and other leftists on this issue. But the left’s intentional deception makes it so difficult to do so. With all their false claims of selective editing, you’d think one good lefty, just one, might tell the whole story and set the example to which they insist on holding the right. Of course not.

Patterico positioned perfectly some of the challenges we face today:

The left has been covering up Kimberlin for years. Friedman himself is deathly afraid that people will learn about Kimberlin’s past — so much so that he censors mention of Kimberlin in his comments. For my efforts in shining the spotlight on this violent and dishonest man, Kimberlin has threatened to sue me, and has written numerous letters to my bosses at my office, accusing me of stalking him and the like. It is guaranteed that this post, which makes a legitimate point about a site’s censoring of important information on a topic of public interest, will lead to another e-mail to my boss.

His goal is to shut me up.

That’s not going to happen.

Maybe Think Progress will bury the truth about Brett Kimberlin.

I too was threatened. I too will not shut up. I stand with Patterico.