The owner of the Red Hen restaurant in Lexington, Virginia, kicked out White House press secretary Sarah Sanders Friday night because she is a part of President Trump’s administration. The media are not only mounting a defense for her hateful, discriminatory behavior, but are criticizing her supporters, including the president.

Both Sanders and one of the waiters at the restaurant posted about the incident on social media.

“I just served Sarah huckabee sanders for a total of 2 minutes before my owner kicked her out along with 7 of her other family members…,” Jaike Foley-Schultz wrote on Facebook but later edited the post to say it was a polite exchange between Stephanie Wilkinson and Sanders before Sanders was thrown out.

“Last night I was told by the owner of Red Hen in Lexington, VA to leave because I work for @POTUS and I politely left. Her actions say far more about her than about me. I always do my best to treat people, including those I disagree with, respectfully and will continue to do so,” Sanders tweeted:

In mere hours after the posts were promoted, the Washington Post sent staff to Lexington to give Wilkinson a chance to defend her offensive behavior toward someone who chose to dine at her establishment.

The Washington Post reported and continuously updated its reports during the weekend and on Monday:

And she knew — she believed — that Sarah Huckabee Sanders worked in the service of an “inhumane and unethical” administration. That she publicly defended the president’s cruelest policies, and that that could not stand.

“I’m not a huge fan of confrontation,” Wilkinson said. “I have a business, and I want the business to thrive. This feels like the moment in our democracy when people have to make uncomfortable actions and decisions to uphold their morals.”

After filling in details about Sanders’ party enjoying cheese boards and the kitchen already preparing their meal, the Post reported that Wilkinson confronted Sanders:

Several Red Hen employees are gay, she said. They knew Sanders had defended Trump’s desire to bar transgender people from the military. This month, they had all watched her evade questions and defend a Trump policy that caused migrant children to be separated from their parents.

“I was babbling a little, but I got my point across in a polite and direct fashion,” Wilkinson said to the Post. “I explained that the restaurant has certain standards that I feel it has to uphold, such as honesty, and compassion, and cooperation.”

One of the Post’s updates included Wilkinson’s doubling down on her discriminatory action.

“Wilkinson had no regrets about her decision,” the outlet reported.

“I would have done the same thing again,” Wilkinson said on Saturday. “We just felt there are moments in time when people need to live their convictions.”

“This appeared to be one,” Wilkinson continued.

On Monday, CNN’s follow-up reporting did not focus on Wilkinson’s controversial decision to kick a high-ranking member of the Trump administration out of a business open to the public, but, instead, criticized the president.

The tweet serves to amplify a controversy that has been seized on by conservatives as an example of harassment of Trump officials by progressives:

The Red Hen Restaurant should focus more on cleaning its filthy canopies, doors and windows (badly needs a paint job) rather than refusing to serve a fine person like Sarah Huckabee Sanders. I always had a rule, if a restaurant is dirty on the outside, it is dirty on the inside!

The left-wing Slate website chose to attack on Yelp and elsewhere those who are part of an outpouring of support for Sanders:

Yelp has now posted an “active cleanup alert” on the restaurant’s page informing users that moderators are deleting reviews from people who have not had a “personal consumer experience with the business.”

And, as Buzzfeed’s Charlie Warzel pointed out, there now appear to be conspiracy theories circulating on Twitter that the Red Hen’s owners are guilty of sexual crimes like pedophilia, similar to the Pizzagate conspiracy that a D.C. pizza parlor called Comet Ping Pong was helping Hillary Clinton run a child sex-trafficking ring out of its basement. 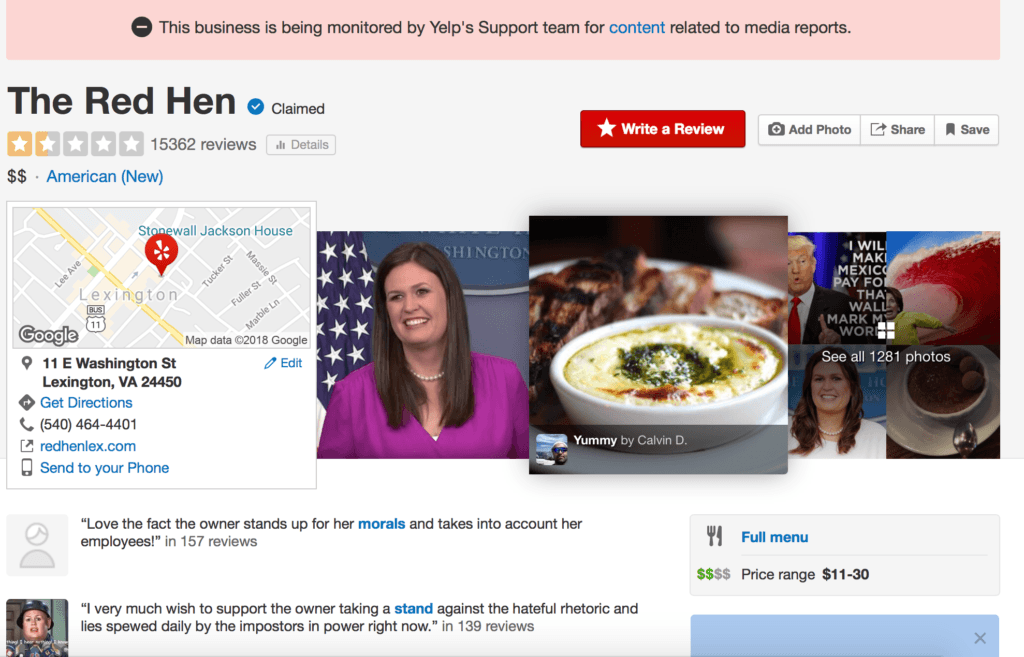