USA Today has partially corrected a false report that President Donald Trump posted, then deleted, a tweet linking to an article at Breitbart News about “how ‘tough’ his supporters could get.”

Trump tweeted a link to the Breitbart.com homepage at 11:05 p.m. Eastern Daylight Time on Thursday evening. He did not tweet a link to any specific article.

A screen grab posted by a Breitbart critic confirms that fact — and the link in the tweet directs readers to the home page, not to any article. 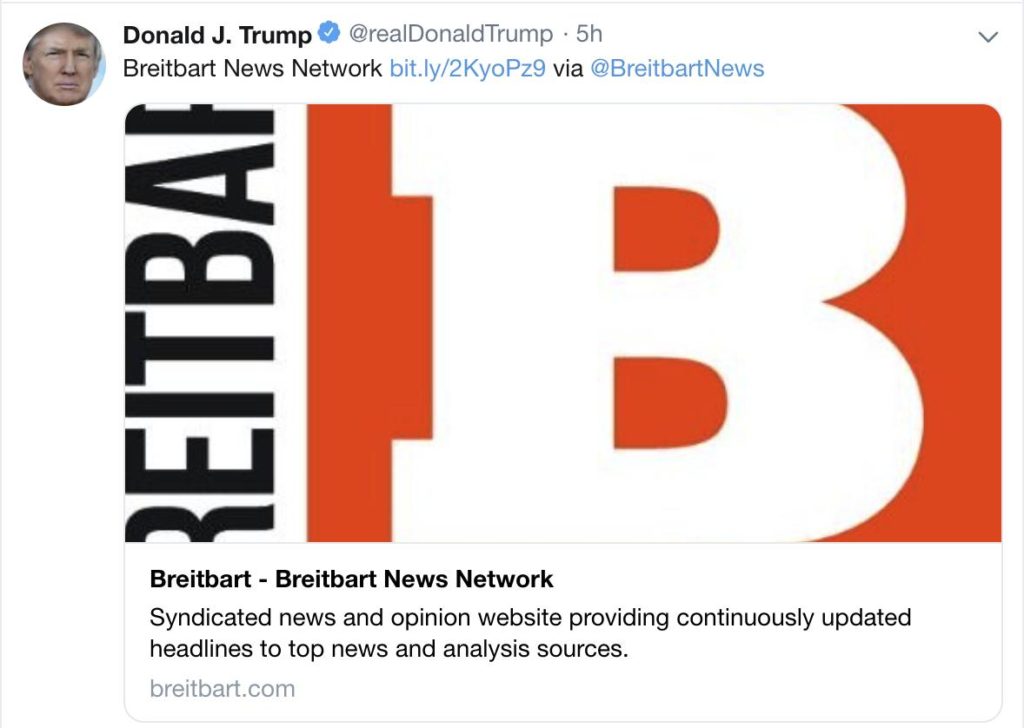 WASHINGTON – President Donald Trump used Twitter on Thursday night to promote an interview in which he explained how “tough” his supporters could get – and deleted the tweet Friday morning after the New Zealand mosque shootings.

Breitbart said Trump was talking about the “vicious” tactics of “the left.”

“So here’s the thing—it’s so terrible what’s happening,” Trump said before discussing his supporters. “You know, the left plays a tougher game, it’s very funny. I actually think that the people on the right are tougher, but they don’t play it tougher. Okay?”

A corrected version of the story changed the headline to drop a reference to Trump deleting his tweet, and added a note at the top of the article (original italics): “Correction: Corrects headline to make clear that Trump tweeted a link to Breitbart’s homepage, not the specific story about the interview with him.“

However, the USA Today story still refers to Trump posting an article: “”Social media users criticized Trump for posting the article as news was breaking about the shootings at two mosques in Christchurch, New Zealand, that left 49 people dead.”

The lead story at Breitbart News at the time Trump tweeted was a write-up of an interview in which former New York City police commissioner Bernard Kerik told Breitbart News Tonight that FBI agents were “scared to death” of criticizing the politicization of their agency — a subject in which Trump has shown interest.

At the time of the president’s tweet, there were few news reports about the New Zealand shooting, and cable news was focused on other events and commentary. (Within the hour, Breitbart News changed the lead story to focus on the New Zealand attacks.)

The president deleted the tweet Friday morning — but there was an independent reason to do so: it simply linked to the Breitbart News homepage, apparently in error.