The Islamic State has not taken credit for the blaze that consumed large sections of Paris’ Notre-Dame Cathedral Monday, but this has not stopped them from reveling in the destruction.

The Islamic State propaganda group Al-Muntasir created a poster with a large photograph of the burning church bearing the caption “#HaveaNiceDay,” according to the Terrorism Research & Analysis Consortium.

Referring explicitly to Notre-Dame Cathedral, the poster goes on to proclaim: “Its construction began in the year 1163 and ended in 1345. It is time to say ‘goodbye’ to your polytheistic temple.” 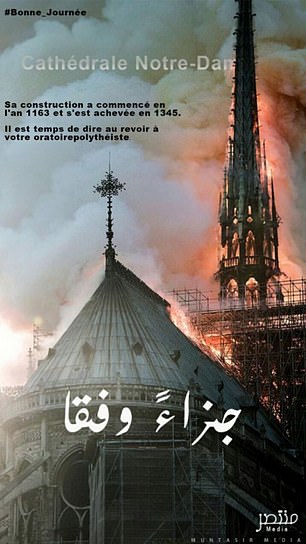 The fire raged for nine hours Monday evening, taking out the roof supported by centuries-old oaken beams and causing the collapse of the cathedral’s iconic spire.

Another photo of the cathedral spire crashing down was sent out by the pro-jihad group GREENB1RDS, with the accompanying caption: “The Cross is Falling Down Allahu Akbar,” followed by the icon of a flame, SITE revealed.

The Paris prosecutor’s office has said it is treating the fire as an accident, since there is no evidence of arson or terrorist activities.

Remarkably, despite the extent of the damage and the extreme temperatures and smoke, no one was killed by the blaze. One firefighter suffered non-fatal injuries, among the more than 400 who fought the flames for hours.

An unlikely hero of the rescue efforts was a Catholic priest, the chaplain of the Paris firefighters, Father Jean-Marc Fournier, who rushed into the burning cathedral to save the church’s most precious relic, believed to be the Crown of Thorns placed on Christ’s head during his passion.

#ISIS supporters’ celebration of #NotreDameCathedral fire—which they call a blow to “hearts of the crusader leaders”—shows not just zealotry, but how pathetically they’ll grasp at anything as victory. Echoes jihadists’ praise for hurricanes, wildfires, etc https://t.co/XBAhiJRZXf pic.twitter.com/oJw1MY0MuY

Begun in the middle of the 12th century and substantially finished a century later, Notre Dame is the most iconic of the Gothic cathedrals of the Middle Ages and a symbol of Western civilization.

The cathedral is also Paris’ number-one attraction, and some 14 million people visit it every year, more than visitors to the Louvre or the Eiffel Tower.