What’s most revealing about all this, is that CNNLOL has become such a fake news parody of itself, and is so aware it has become a fake news parody of itself, the far-left outlet felt it had no choice other than to panic over a parody video. In other words,  CNNLOL’s credibility is so shot, it had every reason to fear people would believe a CNNLOL parody was valid, was real —  this includes the misspelling of “Todler’ in the phony CNNLOL chyron.

Imagine your reputation being so tattered, such a national joke, you have to go into Defcon 1 fact checking mode after President Trump retweeted this:

The panic that ensued at CNNLOL as soon as Trump retweeted that, had nothing to do with CNNLOL not being able to take a joke… Obviously, CNNLOL can’t take a joke;  anyone who remembers how the far-left outlet openly threatened to destroy the life of a meme maker, knows that. But that wasn’t CNNLOL’s fear this time.

No, what panicked the fake news outlet was the perfectly justifiable concern people would assume Carpedonktum’s brilliant parody was not a parody. CNNLOL was worried people would believe CNNLOL had actually lied and manipulated the truth to that grotesque of a degree.

And CNNLOL was right to worry because CNNLOL has serially lied and manipulated the truth to that grotesque of a degree, and has done so on too many occasions to count. Remember Chris Cuomo exiting his basement? Remember the fish food? Remember Covington? Remember CNNLOL blaming Trump for a plane crash, blaming a Trump ambassador for his own death threats? Remember CNNLOL manipulating this video and this video and this video?  I could literally spend all day today and tomorrow linking CNNLOL’s fake news, lies, deliberate distortions, and conspiracy theories.

So of course CNNLOL was worried we would all believe the parody video was real. And then, to everyone’s amusement, CNNLOL proved it knows its national reputation is a joke by screaming and stumbling around like the Keystone Liars they are to prove the parody was a parody.

Twitter labeled the video as “manipulated media” complete with a warning label so pious it made me laugh out loud: 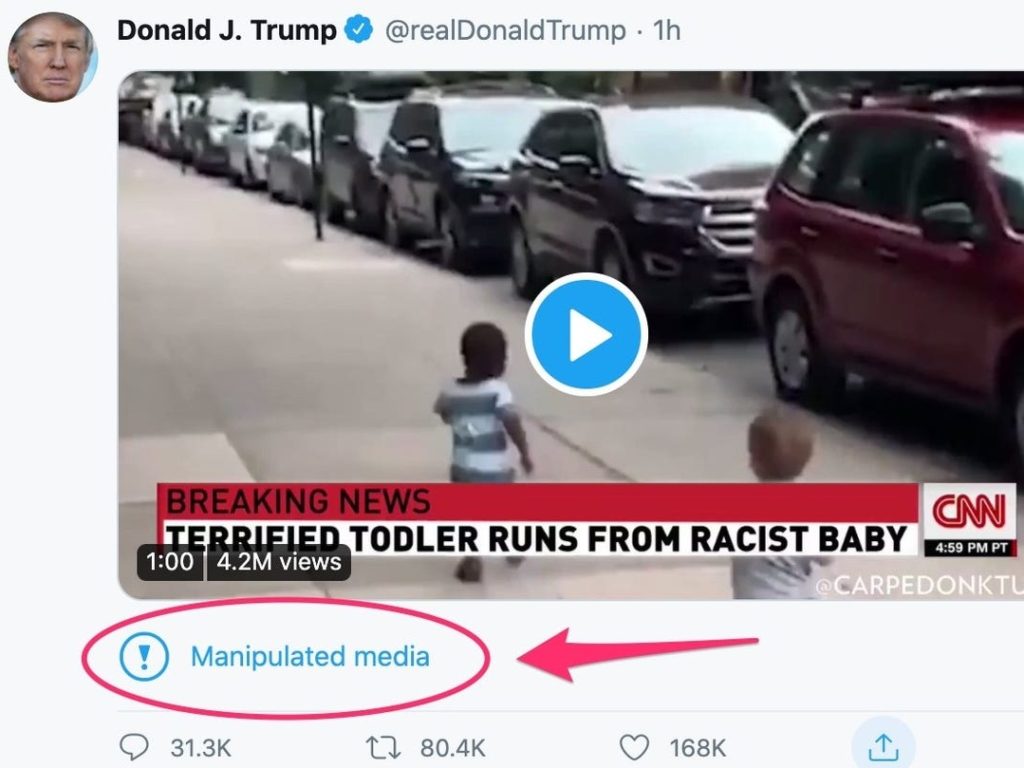 Video being shared of CNN[LOL] report on toddlers is doctored, journalists confirm

Multiple journalists confirmed that the video, which was shared by President Trump, is edited and features a fake CNN[LOL] chyron. The original CNN story, which is from 2019, reported on a friendship between two toddlers.

The far-left Washington Post’s own fake fact-checker fired off a stern harrumph.

They may still be active, I don’t know, but a few years ago I discovered a number of Twitter accounts impersonating my account. The accounts posted wildly misleading information about me, my work… The accounts were desperate to make me look like a bigot… You want to know why I didn’t care then and don’t care now…? The parodies are so ridiculous no one will believe it’s me. Plus I’m not a neurotic pajama boy.