Denver Archbishop Samuel Aquila said Friday that every Catholic has the responsibility to be faithful to the Gospel of Life and oppose abortion.

The archbishop tweeted out a meme contrasting the two Catholic nuns who spoke at recent national conventions, one in support of life and the other insisting that abortion is above her “pay grade.” The meme “speaks for itself,” the archbishop said. 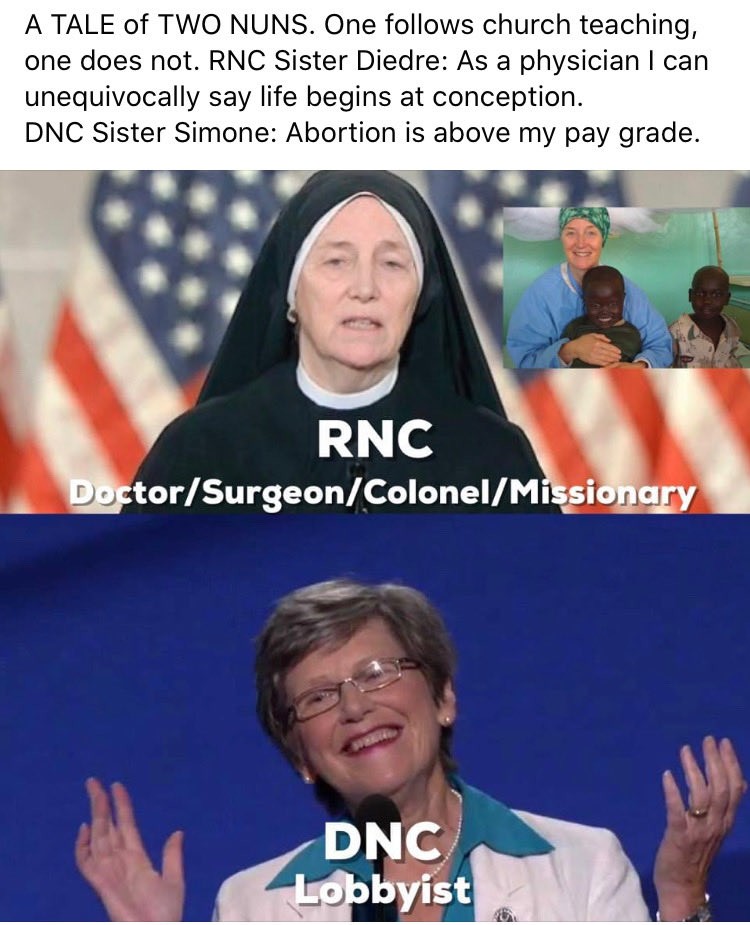 A Tale of Two Sisters meme

In her invocation at the Democratic National Convention, Sister Simone Campbell, the leader of Nuns on a Bus, described her vision for America as one “that ends structural racism, bigotry and sexism so rife now in our nation and in our history,” a vision “that ensures hungry people are fed, children are nourished, immigrants are welcomed.”

When pressed this month on the issue of abortion, however, Sister Campbell refused to take a stand on the morality of abortion, saying, “It is above my pay grade.”

In her intervention at the Republican National Convention, Sister Dede Byrne — a medical doctor and retired army officer — made the pro-life message the centerpiece of her entire address.

While we tend to think of the marginalized as living beyond our borders, Sr. Byrne said, “the truth is the largest marginalized group in the world can be found here in the United States. They are the unborn.”

“As Christians, we first met Jesus as a stirring embryo in the womb of an unwed mother and saw him born nine months later in the poverty of the cave,” she said.

“We must fight against a legislative agenda that supports and even celebrates destroying life in the womb,” Sister Byrne said. “Keep in mind, the laws we create define how we see our humanity. We must ask ourselves: What we are saying when we go into a womb and snuff out an innocent, powerless, voiceless life?”

“As a physician, I can say without hesitation: Life begins at conception,” the nun declared. “While what I have to say may be difficult for some to hear, I am saying it because I am not just pro-life, I am pro-eternal life. I want all of us to end up in heaven together someday.”

In his accompanying tweet Friday, Archbishop Aquila noted there is only one truly Catholic position on abortion since the Catholic Church is unapologetically pro-life.

“This is about Catholic teaching, the seriousness of abortion, & never to be dismissive or flippant with so serious a matter,” Aquila said. “Catholic public persons & every Catholic has the responsibility to be faithful to the Gospel of Life.”

Archbishop Aquila provided a forceful Catholic voice during the 2016 election period, insisting that life issues — and especially opposition to abortion — must take absolute precedence in deciding for whom to vote.

“Catholics in good conscience cannot support candidates who will advance abortion,” he wrote at the time.

While never endorsing a particular candidate, the archbishop observed that the Democrats’ 2016 platform was “aggressively pro-abortion, not only in funding matters, but in the appointment of only those judges who will support abortion.”

Last June, Democrat candidate Joe Biden appeared in a Planned Parenthood advertisement promising to do “everything in [his] power” to defend abortion rights.

Biden has thrown his full support behind abortion on demand and has promised to help repeal the Hyde and Helms Amendments, which protect taxpayers from having to finance abortions.