A suicide bomber driving a car laden with explosives killed at least 90 persons and injured over 125 more in an attack in the Somali capital of Mogadishu Saturday.

The explosion reportedly took place at the Ex-Control junction, and police officer Mohamed Hussein said that the attack targeted a tax collection center during the morning rush hour.

Although no one has yet taken credit for the attack, Somali President Mohamed Abdullahi Farmaajo has blamed the al-Shabaab jihadist group, condemning the attack as a “heinous act of terror.” Al-Shabaab, which is tied to al-Qaida, has carried out many similar attacks in the past.

Among the injured were children and several Somali police officers, as well as a number of university students who had been travelling in a bus. Witnesses also reported that that a small team of Turkish engineers was present near the Ex-Control checkpoint, constructing a road to the city at the time of the explosion. At least two of the engineers died in the blast and their car was destroyed.

The mayor of Mogadishu, Omar Mohamud Mohamed, said that most of those killed were civilians, including two Turkish citizens. Hodan Ali, adviser to the mayor, said that the death toll “is above 90 at the moment,” but is expected to rise because of the many severely injured persons.

Somali police chief Abdi Hassan Mohamed said that the “devastating” circumstances surrounding the explosion made it hard to determine the exact number of casualties. 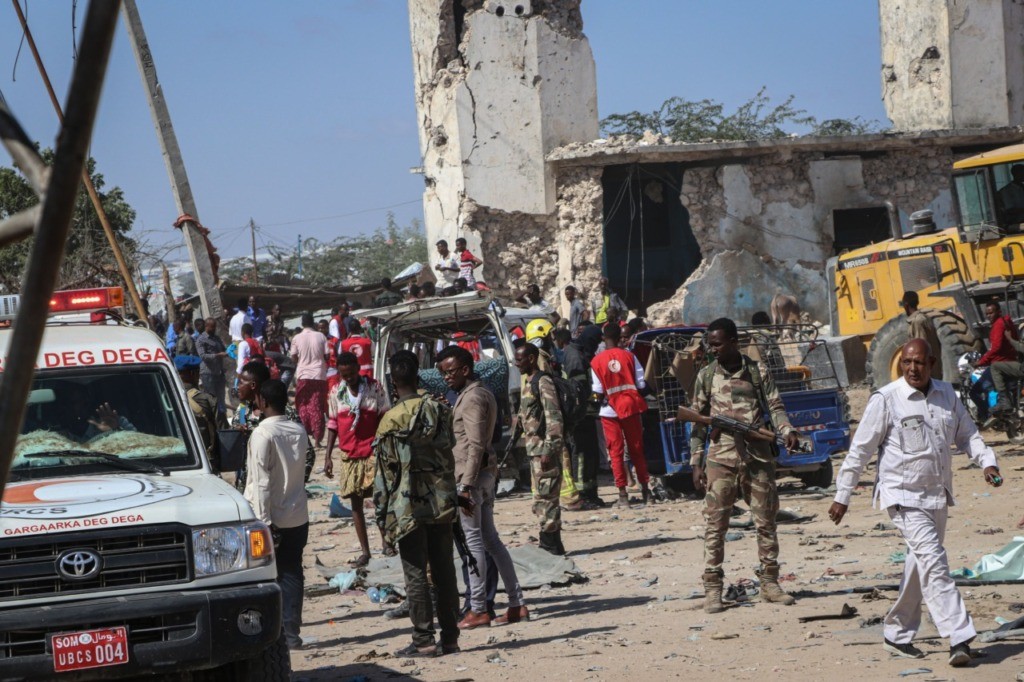 Somali soldiers secure the scene at a car bombing attack site in Mogadishu, on December 28, 2019. – A massive car bomb exploded in a busy area of Mogadishu on December 28, 2019, leaving at least 76 people dead, many of them university students. ( ABDIRAZAK HUSSEIN FARAH/AFP via Getty Images)

Prime Minister Hassan Ali Khiere has organized an emergency committee to provide assistance to those injured in the blast.

“All I could see was scattered dead bodies amid the blast and some of them burned beyond recognition,” he said.

“I saw many dead bodies lying on the ground,” said another witness, Mohamed Abdi Hakim. “Some of those dead were police officers, but most of them were students.”

The al-Shabaab terror group was driven out of Mogadishu in 2011 and has suffered other strategic losses as well, but its militants still regularly attack sites in Somalia and neighboring Kenya.

In 2019, al-Shabaab has attacked a shopping mall, the mayor’s office, and luxury hotels. Just two weeks prior to Saturday’s bombing, the group carried out a hotel siege for hours, killing five people in the process.

The Islamist group was also blamed for the most lethal attack in the nation’s history, when a truck bomb exploded next to a fuel tanker in Mogadishu in October 2017, which created a fire-storm that killed some 600 people.