Police in Hong Kong injured nearly two dozen and arrested at least 14 throughout the weekend as anti-China protesters defied a ban on marching against the use of violence to silence dissent.

Pro-democracy movement leaders estimated nearly 300,000 people heeded the call to defy the police’s refusal to issue a permit for a protest this weekend in Yuen Long, a New Territories rural area, meant to condemn the use of violence last week by a mob of white-clad thugs police confirmed had ties to triads, Hong Kong’s traditional organized crime syndicates. The protesters, citing video evidence showing the thugs chatting peacefully with police officers and pro-China officials, claim the Hong Kong government had a hand in the mob attacks on protesters last week.

Protests this weekend also occurred in the heart of Hong Kong, near China’s liaison office in the city. Protesters on Hong Kong Island dispersed into smaller groups in an attempt to disrupt the coordinated police violence against them.

Videos from the marches this weekend revealed dramatic scenes of protesters attempting to defend themselves from tear gas attacks, avoiding rubber bullets and sponge grenades while calling for an end to violence against pro-democracy protesters. Many affected posted photos and videos of their alleged injuries during the protests. One video circulating on social media appeared to show residents at a home for the elderly in Yuen Long coughing painfully after tear gas entered their residence. Another showed an angry older woman shouting down police in Yuen Long, urging them to stop attacking the protesters, while encouraging protesters to go home: 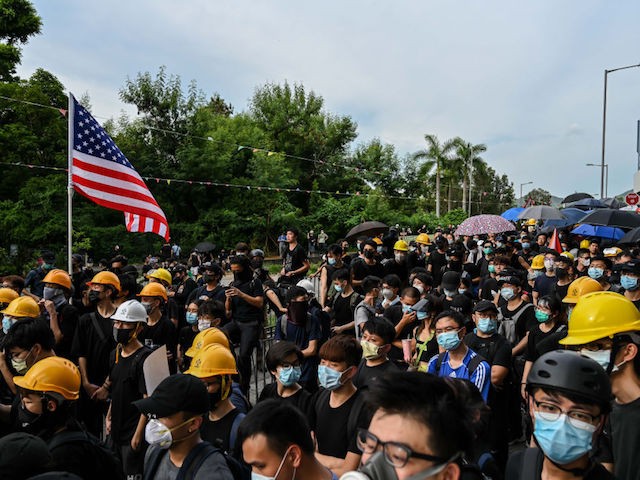 Protesters are seen during a stand-off with the police in the district of Yuen Long on July 27, 2019, in Hong Kong (Billy H.C. Kwok/Getty Images).

Authorities denied the protesters a permit to assemble in Yuen Long on Saturday. The protester who applied for the permit, Max Chung, urged protesters to assemble anyway while applying for a letter of no objection from the police, which would allow the protesters to be present in the area. The police denied that request also, leading Chung to back down from his call to assemble. Authorities arrested Chung for organizing an illegal assembly despite his public discouragement against the protest.

“This is not a protest. I am just telling you my personal activity,” he said. “For now, I will not tell others to join my personal walk.”

The police did not estimate how many people organized for Saturday’s protest, as they deemed the act illegal. Chung claimed as many as 280,000 people joined his “personal walk.”

Michael Mo, a fellow activist, told the Hong Kong Free Press (HKFP) that denying Chung’s permit, which he also helped apply for, “amounts to the implementation of martial law” as it appears that law enforcement will essentially ban all organized statements against the government, silencing dissent generally.

A CNN crew present at the protests recorded police attacking it, as well as protesters, with tear gas, suggesting indiscriminate use of the irritant to dissuade all from being present. CNN reported that the protesters were peaceful before police attacked.

In another dramatic scene from Yuen Long, an infuriated older woman in a blue shirt was recorded shouting down police and urging protesters to go home in an attempt to quell the violence. The woman has not been identified at press time, and neither police nor protesters attacked her:

I got this shot of her yesterday. She was furious and fearless. (@GettyImages) https://t.co/FWDTbzYfDg pic.twitter.com/o8y7W6rG8K

A video circulating on Facebook and claiming to have been taken at the Kwan Yue Elder Nursing Home in Yuen Long showed tear gas circulating into the building, affecting older residents. In the video, a woman was heard asking, “Why aren’t the windows closed?” as the gas blew in.

In the aftermath of Saturday’s Yuen Long protest, the HKFP reported that at least 23 people were hospitalized, among them “at least four police officers and two journalists.” Two of the injured were in “severe condition” as of Sunday.

In a press conference following the Yuen Long protests, police spokeswoman Yolanda Yu denied the veracity of the video showing residents at an elderly home choking on tear gas and did not guarantee that police would stop using the gas on peaceful protesters. Yu insisted the police had “no choice” but to attack protesters and condemned the “violent acts” of the pro-democracy movement.

Police continued to use violence in Sheung Wan and other districts in the heart of the city of Hong Kong Sunday against protesters they accused of arson and vandalism. The South China Morning Post estimated Monday that “tens of thousands” rallied in Central and Sheung Wan, two large metropolitan neighborhoods, but split up to occupy multiple neighborhoods on Hong Kong island to make it more difficult for police to corral and attack them. One protester described the move as a “guerrilla tactic” to sustain the protest longer: 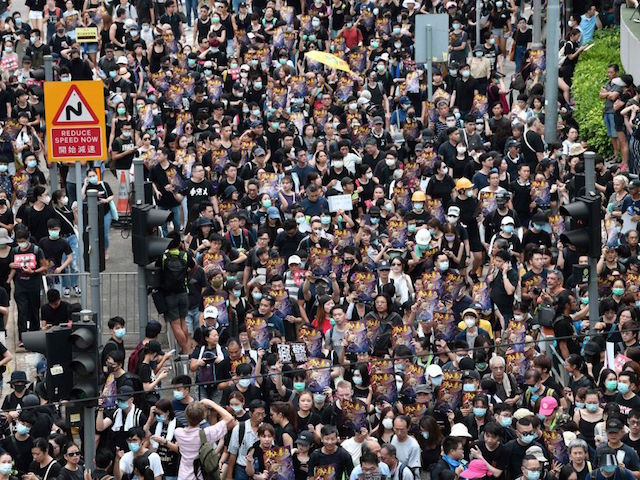 Police attacked the smaller crowds with tear gas and rubber bullets as they had done in Yuen Long on Saturday. Joshua Wong, a prominent member of the pro-democracy movement, was present at the protests and has launched a campaign to encourage the United States to stop selling tear gas to the government of Hong Kong, as it has now begun using it against its own people:

HK Riot Police fired bullet & tear gas directly at persons and indoor that made in US. I am calling US Gov for the suspension of crowd control equipment exports to HK, prevent human rights abuses.

Police officials have insisted the attacks on their behalf were necessary.

“Some radical protesters acted violently in parts of Sheung Wan and Western District, including hurling bricks at police officers, committing arson and pushing towards the police cordon line a cart with burning cardboards, threatening the safety of police officers and members of the public,” police said of Sunday’s protests in a statement Monday. “In the vicinity of Western Market in Sheung Wan, some protestors set ablaze a cart with miscellaneous objects and pushed them towards Police cordon line, seriously threatening the safety of everyone at the scene.”

Hong Kong Commissioner of Police Stephen Lo reportedly sent a letter to the police force congratulating them on their crackdowns this weekend, stating he was “really proud” of their actions.

“Your exceptional level of professionalism and courage displayed successfully restored the public order without causing a large amount of casualty,” the letter read, according to the South China Morning Post. “I, together with the force management, will always stand by you and do our utmost to overcome the challenges ahead, despite any adversities we face.”

Police have reportedly begun preparing water cannon vehicles for use in the next protests, assuming more will occur.

Protests have continued in Hong Kong since early June, beginning in response to a proposed bill that would have allowed China to extradite any individual present in Hong Kong if accused of violating Chinese law. As China is a communist dictatorship, protesters worried the law would allow China to arrest Hong Kong residents – and others merely present in the city – for criticizing communism or worshipping outside of Chinese government-controlled churches and temples. Millions have joined the Hong Kong protest movement.

The Yuen Long protest this weekend was specifically a response to triad-linked armed thugs beating suspected protesters at the Yuen Long train stations last week after a peaceful protest against the extradition bill ended. The thugs attacked anyone wearing black, the color of the protest movement, including many present at the train station who claimed to have not taken part in the protests.

The extradition bill is currently tabled, meaning it is not actively being discussed but could be revived by lawmakers at any moment. Lawmakers have not been able to legislate since early July after protesters vandalized the Legislative Council floor and destroyed the equipment necessary to run a parliamentary session.
Follow Frances Martel on Facebook and Twitter.