Reports on the ground estimate that the white-clad mob numbered in the “hundreds” and targeted individuals in Yuen Long’s West Rail Line mass transit station that wore black, the color of the anti-China protests. At least one lawmaker – Democratic Party legislator Lam Cheuk-ting, who had joined the protesters in solidarity to call for an end to Beijing’s erosion of civil rights in the region – was among those that endured significant injury.

Members of the pro-democracy coalition against the Chinese Communist Party produced photos and videos showing the attackers violently assaulting individuals they believed tied to the protests and journalists that attempted to document the attacks. They also published footage appearing to show mob members chatting with police casually, with no apparent fear of being arrested for their violence.

While the mobs, which protesters tied to local “triad” organized crime groups, stormed Yuen Long, most police activity in Hong Kong Sunday night occurred in Sheung Wan, north Hong Kong island – far from Yuen Long and against a group that had organized to protest against China peacefully there. In Sheung Wan, protesters allege, the police fired rubber bullets and tear gas into a crowd that had not shown any signs of becoming unruly. 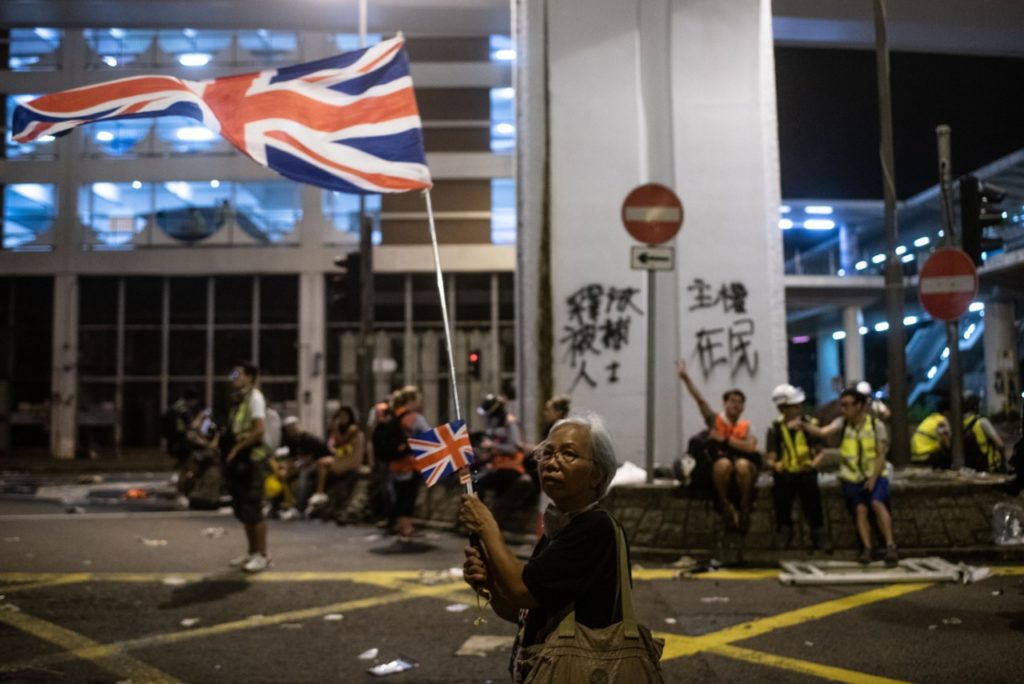 A woman waves UK flags after clashes between protesters and police following a march against a controversial extradition bill in Hong Kong early on July 22, 2019. – Masked protesters daubed the walls of China’s office in Hong Kong with eggs and graffiti July 21 night following another massive rally, focusing anger towards the embodiment of Beijing’s rule with no end in sight to the turmoil engulfing the finance hub. (PHILIP FONG/AFP/Getty Images)

Police have made no arrests at press time in connection to the Yuen Long attacks.

Hong Kong erupted in protests that have yet to abate in early June, a response to an attempt by the nominally autonomous region of China’s Legislative Council (LegCo) to pass a law granting greater influence to China’s Communist Party police. Pro-China lawmakers introduced a law that would allow Beijing to extradite any person physically present in Hong Kong accused of violating China’s authoritarian laws. Opponents complained that the law would essentially turn Hong Kong into a communist city and violate the “One Country, Two Systems” policy China agreed to upon receiving Hong Kong from the U.K. in 1997.

According to the Hong Kong Free Press (HKFP), the violence in Yuen Long followed a peaceful protest; the mob attacked protesters walking towards mass transit on their way home. The protest had attracted nearly half a million people, organizers said, without incident. The attackers indiscriminately beat crowds wearing black shirts, the color of the protests, and stormed a mass transit train, where they could successfully cause more damage given the enclosed space.

According to the South China Morning Post, at least 45 protesters were hospitalized following the attack, one remaining in critical condition.

THREAD: These unsettling #HongKong videos going viral speak for themselves. If you knew *nothing* about the #HongKongProtests you’d still know this is not right. Local reports say pro-gov’t triads beat anti-gov’t protestors – and anyone in between – at Yuen Long rail station. pic.twitter.com/qLFp76vUNj

Lawmaker Lam Cheuk-ting, a victim of the mob violence, broadcast live video on his mobile phone showing the attackers beating protesters, including himself. In a clip republished by another lawmaker, Ray Chan, the mob can be seen surrounding a train and beating passengers inside with sticks.

Snippet of a live broadcast from lawmaker Lam Cheuk ting, showing self-professed pro-Gov't mobsters attacking passengers in train cars at #MTR #YuenLong Stn. #HongKong has 1 of the world's highest cop to population ratio. Where were @hkpoliceforce? Lam was injured as shown live. pic.twitter.com/Aq5JmJlf5u

After the attacks, Lam said he asked police for help containing the mob but they did not respond. He accused the triads of working with police to harm citizens.

“They deliberately turned a blind eye to these attacks by triads on regular citizens,” Lam told Reuters “I won’t speculate on why they didn’t help immediately.”

Lam later published photos of his injuries on his Facebook page.

A coalition of 24 Hong Kong lawmakers issued a statement Monday after the attacks accusing Hong Kong police of cooperating with triads to silence protesters, revealing that multiple protesters called the government emergency number, 999, and received either no responses or tepid suggestions to leave the streets if they wish to avoid trouble.

“Last night, the 999 reporting hotline would not connect for a long time and the police station was closed. There were even police officers who pretended they didn’t see the actions of those in white shirts and red ribbons, and turned around to leave,” the lawmakers alleged. “The police, who are like the servants of triads, have completely lost the public’s trust, forcing people to defend themselves. The situation makes people wonder if [Chief Executive] Carrie Lam received instructions from the party to cause divisions among the public.”

The Agence France-Presse (AFP) reported on Sunday that many of the white-shirted attackers appeared to drive into and out of Yuen Long in cars with Chinese license plates, suggesting the government had allied with the communist regime to bring violent criminals into Hong Kong. Locals on social media also posted videos appearing to show representatives of the mob speaking casually to police officers – indicating that the police knew the identities of the attackers and had a chance to arrest them, but chose not to.

21 July #YuenLongDarkNight #元朗黑夜 #HongKong#anarchy #HongKongProtest
White shirt gang members carrying weapons had a quick chat with the @hkpoliceforce and walked scot-free, no id check, no stop & search like protesters would be treated pic.twitter.com/7t375aVnqI

The Civil Human Rights Front, the most prominent pro-democracy organization behind the protests, issued a statement saying that its members had experienced violent attacks by “thugs” working with the government against them in the past.

“Real thugs have attacked passersby, a journalist and a lawmaker, badly injuring them, but the police have failed to enforce the law. This has angered us greatly,” the statement read.

During the 2014 anti-China “Umbrella Revolution” protests, peaceful Hong Kongers faced large crowds of triad-organized assailants attempting to beat them. As the New Yorker reported at the time:

The assailants shoved the protesters, spat in their faces, and shouted, “Motherfuckers!” and “Go home!” Their accents signalled to Bang that they were from Guangdong, across the border, and they wore bags slung across their chests, a style common in mainland China.

The idea that triads could be patriotic was first raised, in 1984, by Deng Xiaoping. The chief of China’s Public Security Bureau, Tao Siju, caused uproar in Hong Kong, in 1993, when he echoed those sentiments, bluntly stating, “As for organizations like the triads in Hong Kong, as long as these people are patriotic, as long as they are concerned with Hong Kong’s prosperity and stability, we should unite with them.”

China has not faced protests of the magnitude currently occurring in Hong Kong in the post-Tiananmen Square era – one in which the internet facilitates the propagation of violent images and global solidarity against authoritarian regimes. Thus, China has no domestic strategy for handling such protests without deploying the military to kill the protesters. It appears to be importing the tactic of using vulgar, violent mobs against the people from Latin America, where the Cuban communist regime and its proxy in Venezuela have long used mobs or armed gangs (colectivos) to insult, injure, rape, and kill protesters. Cuba has gone so far as to ship out its angry mobs to berate and insult representatives from democratic countries at the United Nations.