The tiny Christian minority in Jolo, Philippines – a majority-Muslim area in an overwhelmingly Catholic nation – has seen renewed energy in its churches now that its faith has been “tested by fire,” Monsignor Romeo S. Saniel, vicar administrator of the Vicariate of Jolo, told Breitbart News in an interview on Tuesday.

Jolo’s Our Lady of Mount Carmel Cathedral was partially destroyed on January 27, when jihadists, later identified as a couple from Indonesia, detonated suicide bombs minutes apart inside, killing 22 people and wounding 111. It was the latest in years of violent attacks Saniel had witnessed or experienced while caring for the Christians of Jolo – including a failed assassination attempt he survived because the gun touching his head jammed when the assailant pulled the trigger.

Saniel told Breitbart News he is now endeavoring to help rebuild the cathedral and bring spiritual and economic support to the survivors of the attack. The Catholic Church is also working to help improve educational and economic opportunities for all residents of Jolo, holding on to the belief that economic desperation can attract young Muslims to jihadist ideology.

Saniel spoke with Breitbart News in anticipation of several events to bring awareness to the dangers facing Philippine Christians in Muslims territories, and other Christians who live as minorities, in the United States this week. The first, “Listening to Survivors of Religious Persecution: The Call for Religious Freedom,” will take place Wednesday at the United Nations, hosted by Aid to the Church in Need, a papal charity of the Catholic Church that supports persecuted Christians globally.

Aid to the Church in Need will also host a Night of Witness event – to pray, reflect, and listen to the victims of Christian persecution – at the Basilica of the National Shrine of the Immaculate Conception in Washington, DC, on Saturday.

Saniel highlighted the resilience of the Christian faith in Jolo – located in an autonomous Muslim region where, he says, Catholics amount to about three percent of the population – even in the face of bombs going off during Mass.

“The bombing and the persecution sometimes … can create a lot of blessings in disguise in our lives,” he said. “The number one blessing is, we have been persecuted in this community but really remained steadfast in our faith. I believe the faith of our minority Christians has been tested by fire and we have a deeper commitment to the life of the church and the life of following Jesus today.”

“Some are exposed to so much danger, but they don’t walk away and they still witness the Christian faith that they have,” he added.

Young Christians, he noted, have particularly experienced renewed enthusiasm in their faith.

Saniel noted that those who attacked the cathedral were foreigners and that, for decades, the vast majority of Philippine Muslims accepted the existence of Christians among them. Most of the southern island of Mindanao, where Jolo is located, is predominantly Christian; nationally, Catholics make up 86 percent of the population. But the Bangsamoro Autonomous Region of Muslim Mindanao is an exception, a nation-within-a-nation in which the rules of living as a Christian in the Philippines elsewhere do not apply.

“In Jolo … we are only four percent, three percent Christians, 97 percent are Muslims in our area, so we are a small minority and we feel that we have been persecuted because of our faith,” Saniel told Breitbart News. “But the majority of the Muslims in our area are friendly and very open to dialogue and witnessing of our religion, except a small minority now we call the Wahhabists or the violent extremists. They are threatening us and attacking us and our churches.”

Wahhabism is a fundamentalist strain of Sunni Islam originating in Saudi Arabia and disseminated widely through radical clerics and terrorist groups like al-Qaeda and the Islamic State. The Islamic State’s affiliate in the Philippines, Abu Sayyaf, took responsibility for the January cathedral bombing.

Abu Sayyaf’s largest temporary victory was the siege of Marawi, the largest Muslim city in the country, in May 2017. President Rodrigo Duterte announced the death of the head of Abu Sayyaf, Isnilon Hapilon, in Marawi in September, effectively ending the siege.

“We have the influence of the foreign Wahhabists when they attacked Marawi city … of the remnants now are in Jolo,” Saniel noted. “According to intelligence, some of them are Westerners … the suicide bombers who attacked our cathedral were identified as Indonesians.”

“When I was distributing Holy Communion to the Christians of Jolo, two young boys were walking behind me and I felt the .45 caliber muzzle in the back of my head, and I heard ‘click,’ but the gun jammed, so I was saved,” he said. “I think the Lord is the reason why I was saved from the attempt. Since then, I have been working for interreligious dialogue, establishing good relations with our Muslim brothers and sisters, and giving a platform to also prevent the recruitment of these violent extremists in our area.”

Saniel said that, since the bombing, many Muslims living around the cathedral “are more compassionate and merciful to us, and they are extending help, they are expressing their desire to help us in whatever way they can.”

He also credited President Duterte with helping the Christian minority there and offering extensive security to prevent another bombing. Duterte has received criticism from international aid groups for feuding with the nation’s Catholic leadership, who have in turn condemned his violent anti-drug policies in the country. Duterte has countered with police evidence that drug trafficking has enriched and empowered jihadis to attack Christian communities. He has, more often, dismissed Catholic leaders and encouraged people to kill them.

Saniel’s experience offers an alternative to the international headlines on the bombastic Duterte. 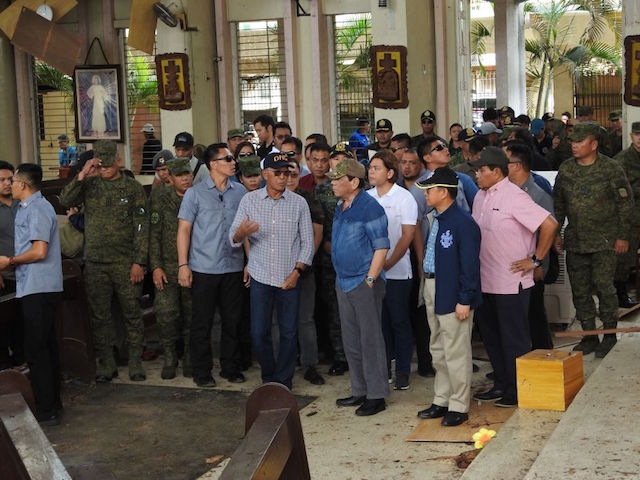 “I feel he treats us differently from the people of Manila because we are minority Christians and we are victimized and so our president has a softer heart and [is helping] rebuild our churches and the lives of Christians and making sure we are also secure through the military,” Saniel added.

Duterte is the first president in Philippine history from Mindanao.

For Saniel, the priority in the aftermath of the bombing is the security of his Christian congregation. He says that, among the policies the Church will use to promote peace will be the development of “social economic projects” and closer ties with local Muslims, to better empower them to reject foreign jihadis.

The programs include as their goals “helping the Muslims become better Muslims, establishing schools, cooperatives, livelihood programs, and we also take care of our small minority Christians. so we have a strong bond with the majority of Muslims who are moderate and most of them are in government and in governance and they are graduates of our Catholic schools,” he said.