The government of Japan confirmed on Thursday that two people infected with the Chinese coronavirus died onboard the Diamond Princess, a quarantined cruise ship in which over 600 people have tested positive for the virus.

Japan’s Asahi Shimbun reports the two patients were a man and woman in their 80s, both of whom had been relocated out of the ship to a medical facility after falling ill. The newly discovered coronavirus, which has infected upwards of 70,000 people since mid-December, causes respiratory failure and symptoms like fever, body aches, and difficulty breathing. Of those onboard the cruise ship, 29 are reportedly in serious condition.

Health officials confirmed that the male patient was a coronavirus carrier on February 12, a little over a week before he died. The couple are the first two passengers on the cruise ship to die.

The cruise ship had been traveling around east Asia when authorities in Hong Kong confirmed that a man who had disembarked in Hong Kong was a coronavirus carrier, according to Japan’s Mainichi Shimbun. At the time, on February 2, Japan responded by docking the ship but isolating all those on board. Yokohama was the Diamond Princess’s initial point of departure.

Japan docked the cruise ship at the port of Yokohama and has forbidden passengers from leaving, transferring confirmed coronavirus patients to hospitals and monitoring the others for potential infection. The ship was carrying over 3,000 people when the government instituted the isolation measure, which it insists has kept the virus from spreading within Japan itself.

Japan has currently documented over 90 cases nationwide and one death, also a woman in her 80s, not counting the 621 cases on the Diamond Princess. Japanese officials reportedly insisted that the World Health Organization (WHO) not count the Diamond Princess cases as cases within Japan, as it gives the impression that the virus is spreading more rapidly on the island nation than the numbers for just Japan would indicate.

The cruise ship has confirmed more coronavirus cases on its own than any other country in the world except for China, which has confirmed 74,579 cases at press time.

In addition to the two deaths, Japan also confirmed seven new coronavirus cases on Thursday outside of the ship. One of the individuals was identified as having received care at a hospital where the woman who died of coronavirus in Japan had also been, suggesting potential issues with protective measures in health facilities nationwide. Adding to the concern was the nature of the new cases on the cruise ship, as well, including government officials who were helping manage to isolate the ship and fell ill. 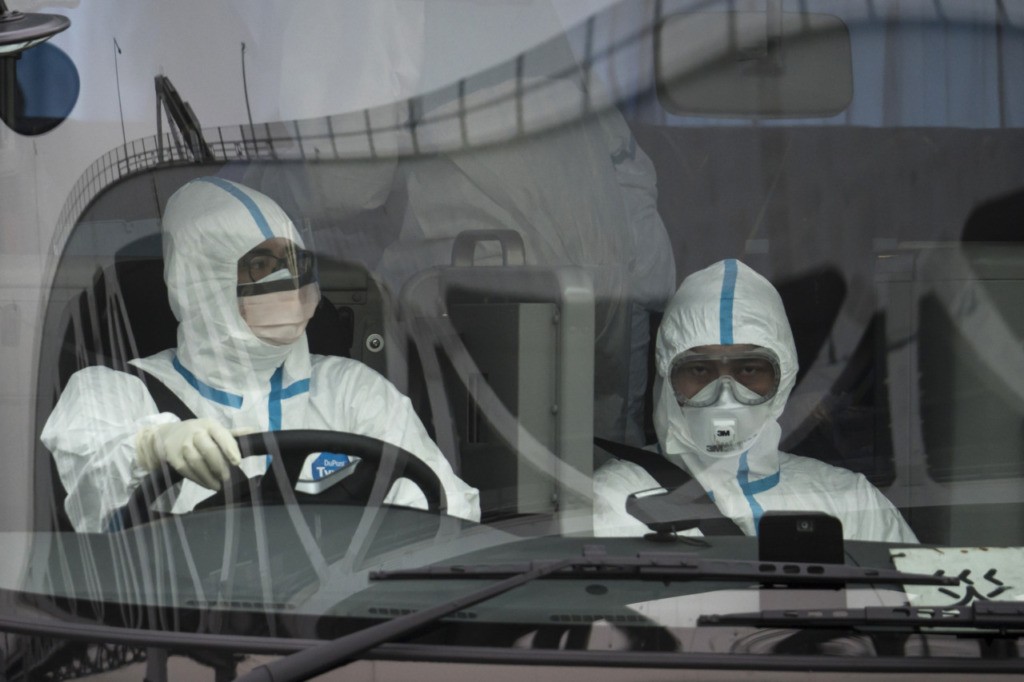 Police officers wearing protective suits and masks are seen as they leave the quarantined Diamond Princess cruise ship, docked at the Daikoku Pier on February 20, 2020 in Yokohama, Japan. Passengers who have tested negative for the coronavirus (COVID-19) have been disembarking the cruise ship since Wednesday, as at least 634 passengers and crew onboard have tested positive for the coronavirus (COVID-19). Including cases onboard the ship, 718 people in Japan have now been diagnosed with COVID-19, making it the worst affected country outside of China. (Tomohiro Ohsumi/Getty Images)

The rapidly increasing number of cases on the ship has led to sharp criticism of both the government and the cruise line responsible for the ship. Speaking to Asahi, an unnamed man trapped on the ship complained that it took days for the ship’s crew to begin wearing protective gear like gloves and face masks.

“I got the impression that the passengers and the crew did not take seriously the risks of infection for a while after the ship’s arrival at Yokohama,” he told the newspaper. “I am afraid that precautions against the infection were not thorough in some respects.”

Citing eyewitness accounts, Asahi described a chaotic situation for the crew on the ship.

“Some of the employees could not stop coughing, and other crew members had to be taken to hospitals by ambulance. Crew members share cabins and eat together in a dining hall,” the newspaper detailed.

The man added that those with symptoms had to wait on long lines to see medical staff, as there were not enough doctors and other medical professionals to care for the hundreds who fell ill. This caused a delay in treatment that likely exacerbated the spread of the virus, he posited.

He also noted that there was no indication of officials separating individuals carrying the virus from those still feeling healthy or shutting down parts of the ship where infected people may have been. The virus is believed to spread through aerosol droplets in the air, making it highly contagious.

Mainichi relayed the concerns within the government that handling of the cruise ship outbreak will hurt popular sentiment towards Prime Minister Abe Shinzo’s administration.

“Just the return of 100-odd people per chartered flight [from Wuhan, China, the epicenter of the outbreak] created chaos. There’s no facility that can accommodate 30 times as many people,” an unnamed Abe official told the newspaper.

The coronavirus outbreak began in Wuhan, central China, and is believed to have been triggered by the consumption of wild game at a meat market in the city. After China alerted the world to the existence of a new, highly contagious virus – 20 days after officially shutting down the market and privately informing WHO officials – many of the world’s nations began evacuating citizens from the region. Japan, the official in the Mainichi article contended, was too occupied trying to save its citizens in Wuhan and overextended itself, leaving the Diamond Princess situation understaffed.

Even while admitting this, anonymous officials speaking to the newspaper appeared frustrated over the criticism.

“Could other countries have dealt with the situation any better?” one exasperated “senior prime minister’s office figure” reportedly said.

“The decline in the number of confirmed cases, based on reported onset dates, implies that the quarantine intervention was effective in reducing transmission among passengers,” the report said.