The Times of India noted on Friday the growing recognition in Chinese state media that the country lost soldiers in a brutal hand-to-hand clash with Indian troops on the nations’ border last week, despite the lack of any official statement other than vague acknowledgment of “casualties.”

China’s Foreign Ministry has repeatedly refused to acknowledge even the possibility of casualties in the brawl, which features Chinese soldiers attacking Indian troops on Indian territory with rocks and sticks wrapped in barbed wire. On Monday, Chinese Foreign Ministry spokesman Zhao Lijian simply told reporters, “I have no information to offer.” On Tuesday, Zhao offered no updates other than calling reports in Indian media that as many as 40 Chinese soldiers, twice the reported number of Indians, had died in the incident “false information.” The next day, Zhao did not mention casualties at all, only issuing a long statement blaming the fight exclusively on India and declaring that the Galwan Valley where it occurred was Chinese territory, a surprising affirmation for Indian diplomats who had long considered it Indian land.

Zhao Lijian is the new spokesman at the Foreign Ministry, known best for his bizarre claim that the Chinese coronavirus pandemic began at a U.S. Army facility in Maryland.

The incident on the China-Indian border occurred on July 15, giving China nearly two weeks to clarify its potential casualties.

The Times of India noted that, following Zhao’s comments, the Global Times, China’s most belligerent English-language state propaganda outlet, published a column by its editor-in-chief Hu Xijin on Wednesday assuring the Chinese people that the soldiers who died in the exchange received a respectable send-off, the first indication of any concern within China about the fate of those soldiers and admission that soldiers did indeed die fighting India.

“As both a former soldier and current media professional, I understand that this is an expedient move with the aim of not irritating public opinion in the two countries, especially in India,” Hu wrote of Beijing’s decision to not offer information regarding casualties in the Galwan Valley battle. “This is Beijing’s goodwill. I believe that the dead have been treated with the highest respect in the military, and that the information will eventually be reported to society at the right time, so that heroes can be honored and remembered as they deserve.”

The Global Times similarly appeared to honor the dead People’s Liberation Army (PLA) soldiers as an afterthought in an article on China’s “Dragon Boat Festival” on Thursday.

“Following the recent China-India border clash, our brave PLA soldiers should never be forgotten. They are the most lovely people in the country, deserving our best wishes for them and their families from all the  Chinese citizens,” the Global Times declared. “I sincerely hope that they can have some scrumptious zongzi during lunch just as the rest of us are.”

Zongzi is a rice and beans dish traditionally eaten during the festival.

Another clue about potential casualties surfaced on Chinese social media on Thursday, according to the anti-communist Hong Kong newspaper Apple Daily. The son of a Chinese major general, Cai Xiaoxin, reportedly posted a message claiming that “two of the five heroes who were injured when defending our country died of wounds from dagger stabs the day before yesterday (June 22) after being hospitalized for eight days.” Cai reportedly did not note if the two were the only ones who died in the incident, and claimed that 47 Indian soldiers had died, not 20 as New Delhi had claimed.

Apple Daily added that the social media post rapidly disappeared from the internet. 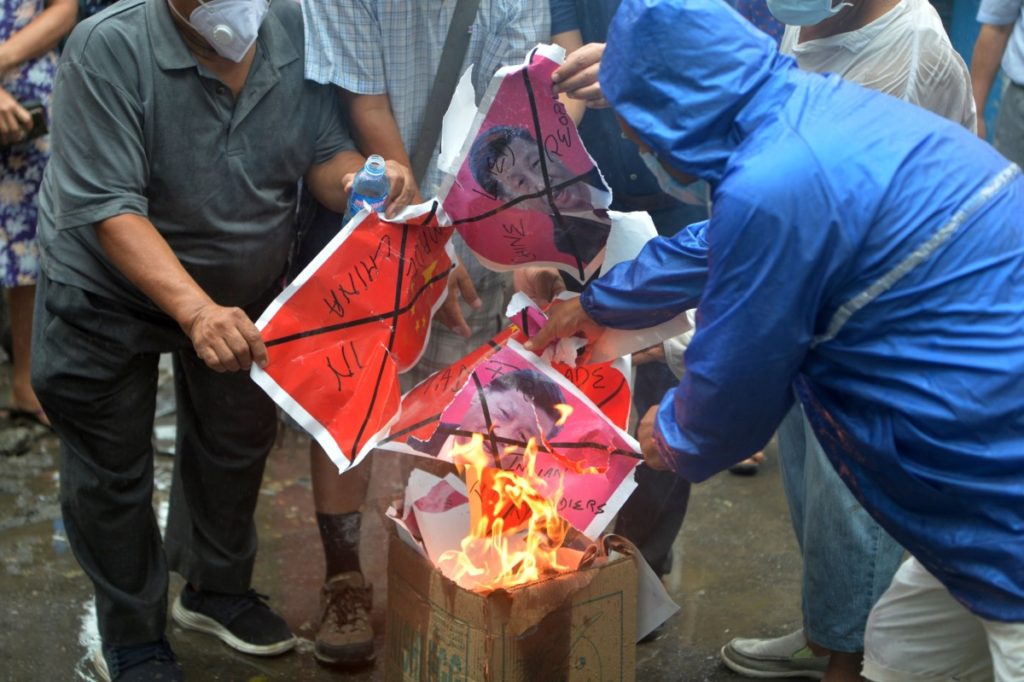 Indian activists along with Tibetans living in exile shout anti Chinese slogans as they burn Chinese flags and poster depicting Chinese President Xi Jinping during an anti-China demonstration in Siliguri on June 20, 2020. – China has freed 10 Indian soldiers seized in a high-altitude border clash in the Himalayas which left at least 20 Indian soldiers dead, media reports said on June 19. (DIPTENDU DUTTA/AFP via Getty Images)

The Times of India described the Global Times articles as an attempt “to pacify the aggrieved families of the Chinese soldiers killed,” claiming that videos had begun to “emerge” on social media for angry PLA families demanding to know if their children were still alive. the newspaper did not share any of the videos.

Another Indian outlet, the online publication India Today, did find evidence of concern among Chinese citizens on the social media platform Weibo, which is controlled and heavily censored by the Chinese Communist Party. India Today published screencaps and translations of Weibo posts on Monday, many of which censors may have already deleted.

“Soldiers and their families need to be taken care of well. The families will be very worried,” another comment on Weibo reportedly read.

India Today noted that many of the comments emphasized patriotism and support of the troops, apparently for “fear of consequences” if criticizing the Communist Party openly.

China has endured years of domestic unrest, largely triggered by dictator Xi Jinping’s incompetent management of the government. In 2018, Xi ordered a national operation to arrest and “disappear” radical Maoist student activists who had challenged China’s use of forced labor and exploitation of workers as incompatible with Marxism. A year later, in Wuhan, the origin city of the Chinese coronavirus pandemic, protesters took the streets in droves against a proposed waste incineration plant in a densely populated area that Xi’s regime had claimed would be an “ecological” park. Elsewhere in the country, angry parents demanded justice after the revelation that Chinese pharmaceutical companies were injecting children with faulty vaccines, essentially leaving them unvaccinated. In one particularly violent incident, a group of parents surrounded a Communist Party official and beat him.