Japan solemnly observed the 75th anniversary of the U.S. dropping an atomic bomb on Hiroshima Thursday in a local ceremony scaled down due to the ongoing coronavirus pandemic.

Hiroshima, a city on Japan’s southwest island of Honshu, hosted the event, which took place in the city’s Hiroshima Peace Memorial Park. About 785 people participated in the major anniversary, which this year marked three-quarters of a century since the World War II bombing.

On August 6, 1945, the U.S. dropped an atomic bomb on Hiroshima, obliterating the city and killing about 140,000 people. The event was the first detonation of a nuclear weapon during war and the first outside of a contained nuclear test. On August 9, 1945, the U.S. dropped a second atomic bomb on the Japanese city of Nagasaki, killing an additional 70,000 people. The bombings led to Japan’s surrender on August 15, 1945, ending the Second World War.

The scale of this year’s Hiroshima memorial pales in comparison to that held last year, which saw 50,000 people attend a commemoration of the bombing. Fewer than 800 people were allowed to attend Thursday’s event. According to Japan’s Asahi Shimbun newspaper, health safety protocols – including mask-wearing, physical distancing, and temperature checks at the park’s entrance – were enforced in an effort to reduce transmission of the Chinese coronavirus.

In previous ceremonies, survivors of the atomic bombing, “bereaved family members, and foreign diplomats gathered” together in the park to “offer a minute of silent prayer at 8:15 AM, when the atomic bomb detonated over the city,” the newspaper reported.

This moment of silence was observed at Thursday’s ceremony by attendees forced to sit two meters apart from one another. 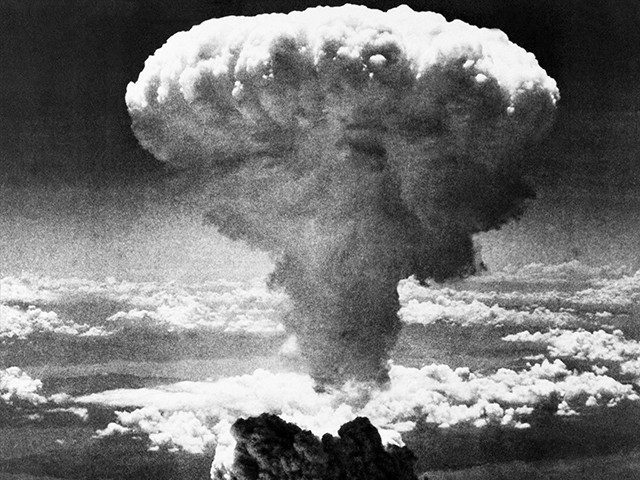 In this Aug. 9, 1945 file photo, a mushroom cloud rises moments after the atomic bomb was dropped on Nagasaki, southern Japan. On two days in August 1945, U.S. planes dropped two atomic bombs, one on Hiroshima, one on Nagasaki, the first and only time nuclear weapons have been used. Days later, World War II was over. (AP Photo/File)

“A record low 23 representatives of bereaved family members traveled to Hiroshima from various parts of Japan. Only 83 nations sent ambassadors or other dignitaries,” the report stated.

“Rumor at the time had it that ‘nothing will grow here for 75 years.’ And yet, Hiroshima recovered, becoming a symbol of peace,” the mayor said in his speech, praising the city’s subsequent recovery after the devastating bombing.

“Matsui also addressed concerns about stalled global efforts to eliminate nuclear weapons. He renewed his request to the Japanese government, which continues to depend on the nuclear umbrella of the United States for its national security, to sign a nuclear ban treaty,” the Asahi Shimbun noted.

“To enhance its role as mediator between the nuclear-weapon and non-nuclear-weapon states, I ask the Japanese government to heed the appeal of the hibakusha [survivors of the bombing] that it sign and ratify, and become a party to the [U.N.’s 2017] Treaty on the Prohibition of Nuclear Weapons,” Matsui said. 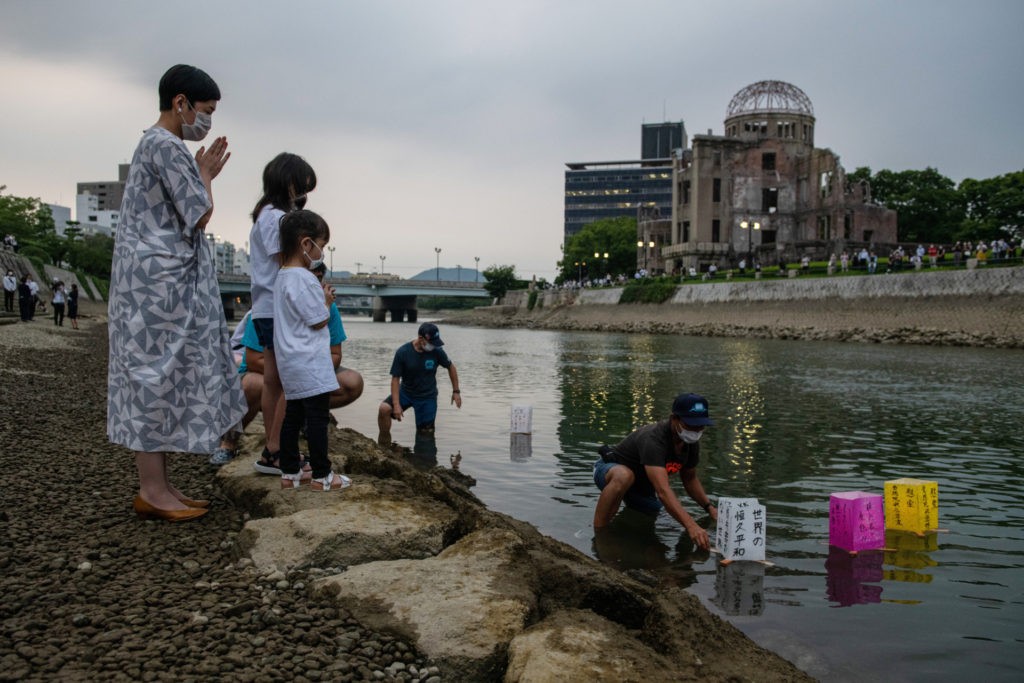 A family prays as paper lanterns are floated on the Tenma River to mark the 75th anniversary of the Hiroshima atomic bombing in a lantern ceremony that has been scaled back significantly because of concerns over coronavirus, on August 6, 2020 in Hiroshima, Japan. (Carl Court/Getty Images)

Speaking to those in attendance, Abe did not mention the U.N. prohibition of nuclear weapons treaty, the newspaper noted.

“While maintaining our three non-nuclear principles, we will make efforts to serve as a bridge among nations with differing views and persistently encourage dialogue and actions among the various nations,” the prime minister said.

U.N. Secretary-General Antonio Guterres chose not to attend the Hiroshima memorial in person; he reportedly made an appearance in a video message played during the event.