It is “extremely unlikely” the coronavirus leaked from a lab in Wuhan, China, and is more likely to have jumped to humans from an animal, World Health Organization (W.H.O.) investigators said Tuesday as they wrapped up their visit to the country’s central Hubei province.

Peter Embarek, leader of the W.H.O. team, told a media conference instead of investigating laboratories in the country,  frozen meats sold at the wet market in Wuhan where the first cluster of cases was detected should instead be pursued as a line of inquiry.

“Our initial findings suggest that the introduction through an intermediary host species is the most likely pathway and one that will require more studies and more specific, targeted research,” Embarek said, as reported by AP.

“However, the findings suggest that the laboratory incidents hypothesis is extremely unlikely to explain the introduction of the virus to the human population,” Embarek said. 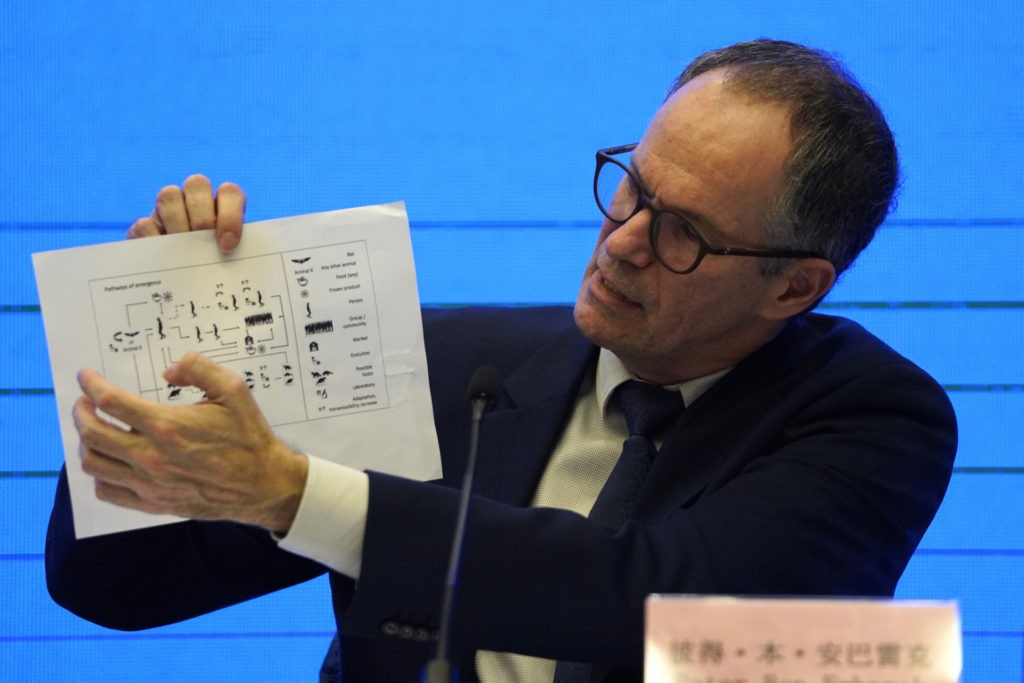 Peter Embarek, of the World Health Organization team holds up a chart showing pathways of transmission of the virus during a joint press conference held at the end of the W.H.O. mission in Wuhan, China, Tuesday, Feb. 9, 2021. (AP Photo/Ng Han Guan)

He backed Beijing and dismissed claims of transmission “in Wuhan or elsewhere” in China before December 2019 – despite allegations the virus was circulating globally months earlier than that, as Breitbart News reported.

Professor Liang Wannian, an expert with China’s Health Commission, told the same press briefing he agreed there had been no substantial spread of the virus in the city of 11 million before the late 2019 outbreak, Reuters reports.

Winnian said while transmissions from animals to humans via bats remains the likeliest origin of coronavirus, the original host “has not been identified.”

Bats and pangolins are potential animal sources of the virus, the professor said, but the coronavirus samples found in them were similar, but not identical to the virus found in humans.

He claimed studies showed the coronavirus “can be carried long-distance on cold chain products,” a nod towards the theory of possible importation of the virus – a point that has gained strength in China in recent months.

Chinese authorities have kept a tight hold on information about the possible causes of the pandemic that has now sickened more than 105 million people and killed more than 2.2 million worldwide.