A host of reports from Afghanistan early Sunday morning indictated the giant former U.S. Bagram air base has been surrended to Taliban terrorists.

The site is home to a prison housing 5,000 inmates as well as hundreds of vehicles left behind in July by U.S. and NATO forces alongside  associated infrastructure.

The Associated Press reports Bagram district chief Darwaish Raufi confirmed the surrender handed the one-time American base over to the terrorists.

The prison housed both Taliban and Islamic State group terrorist fighters who are now free:

Prisoners leaving Kabul jail after being broken out by Taliban. pic.twitter.com/B84F2UrtEA

It came as the Taliban entered the outskirts of Kabul and pledged to bring “peace” to the embattled city, as Breitbart News reported.

UPDATE: An Afghan official said troops have surrendered Bagram air base to the Taliban; the base is home to a prison housing 5,000 inmates.

An Afghan official says troops have surrendered Bagram air base to the Taliban which is home to a prison housing 5,000 inmates

For more on this and other news visit https://t.co/8OWd2TvLrt

The United States military handed control of Bagram to the Afghan government in July after occupying the eastern Afghanistan site for nearly 20 years during the Afghanistan War.

Afghan military officials reportedly said U.S. forces left in the dead of the night without notifying them.

The air base was first built by the Soviet Union in the 1950s. Soviet forces withdrew from the country in 1989. After U.S. forces invaded in response to the September 11, 2001 attacks planned from within Afghanistan’s borders, U.S. military forces occupied the base. 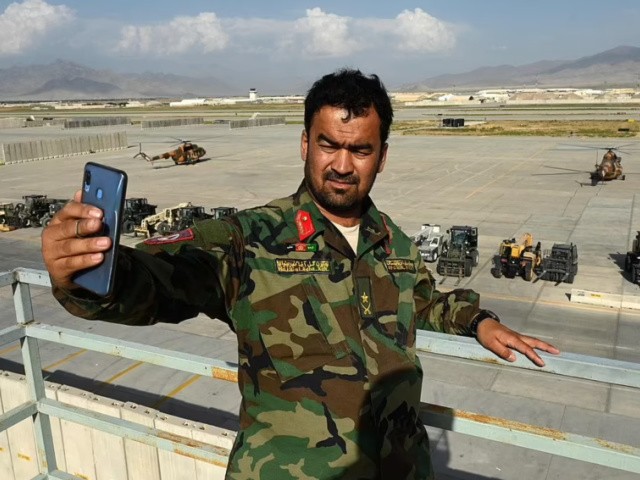 An Afghan National Army (ANA) soldier take a selfie on Monday inside the giant Bagram U.S. air base after all U.S. and NATO troops had left in July, 2021. (WAKIL KOHSAR/AFP via Getty)