Kabul-based drug addicts interviewed by the Pajhwok Afghan News Agency this week urged the Taliban terror group to “prevent the sale and purchase” of illicit drugs in Afghanistan.

“Dozens of addicts who spend day and night on the streets in Kabul say that with the change in the political system, serious attention should be paid to their health,” Pajhwok reported on August 24. “They demand an end to this tragedy by preventing the sale and purchase of these materials.”

The Taliban seized control of Afghanistan on August 15 by ousting Kabul’s U.S.-backed government from power and declaring the country the Islamic Emirate of Afghanistan. The jihadist group held a news conference on August 17 in which it claimed that it would eradicate Afghanistan’s illicit drug industry, which has historically been a major source of income for the Taliban. 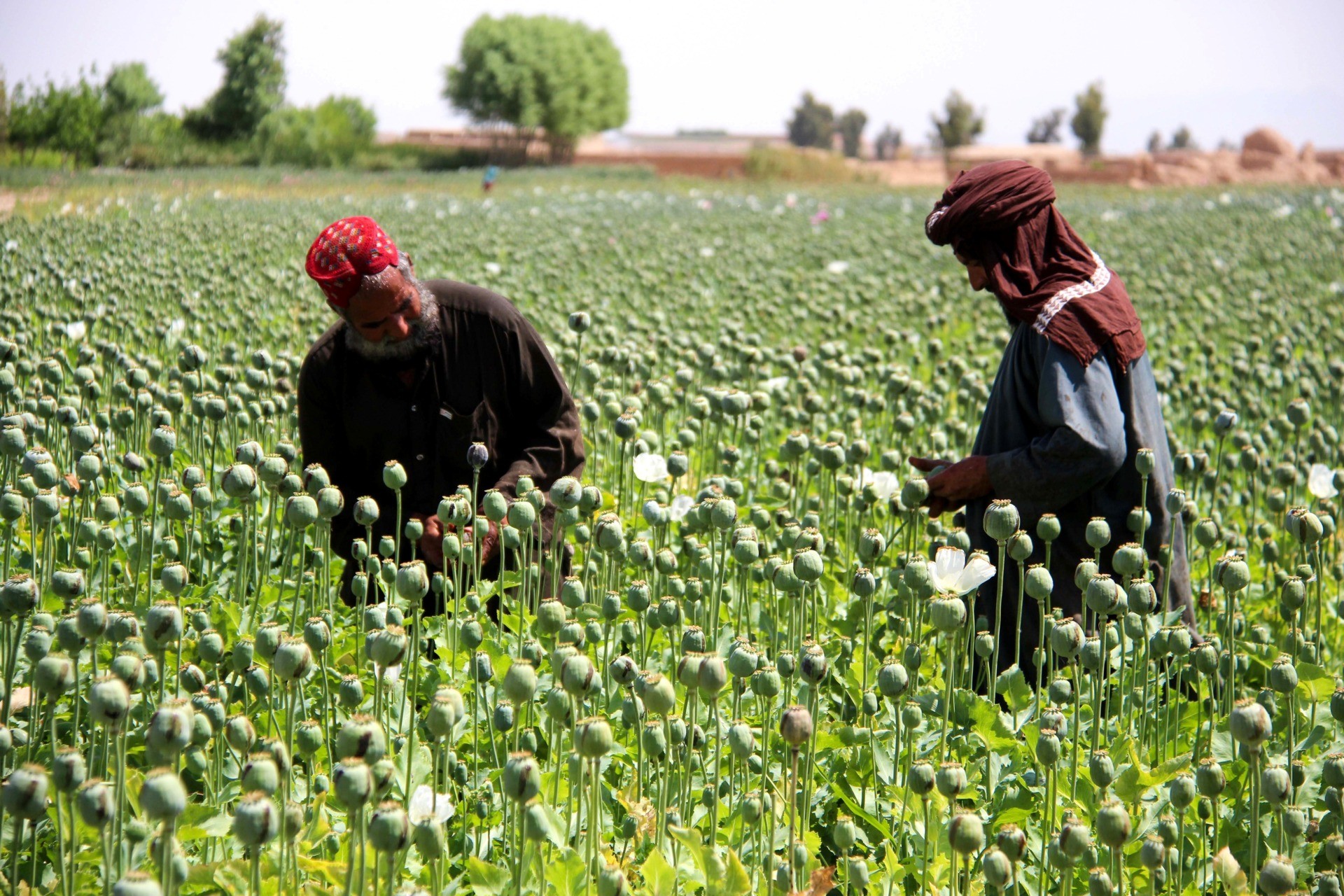 Afghan farmers harvest opium sap from a poppy field in the Gereshk district of Helmand province. – Afghanistan is the world’s top grower of opium, and the crop accounts for hundreds of thousands of jobs. (NOOR MOHAMMAD/AFP via Getty Images).

“We are assuring our countrymen and women and the international community that Afghanistan will not produce any kind of narcotics,” Taliban spokesman Zabihullah Mujahid said at the August 17 press briefing in Kabul.

“Today when we entered Kabul we saw a large number of our youth who were sitting there under the bridges and next to the walls and they were using narcotics,” Mujahid revealed. “This was so unfortunate. I got saddened to see these young people without any faith in the future.”

“From now on, Afghanistan will be a narcotics-free country,” the Taliban mouthpiece declared. Mujahid then asked foreign nations for financial assistance to help Afghanistan achieve this alleged goal.

“International communities should help us so that we can have alternative crops. If we can provide the people with alternative crops then, of course, very soon we can bring [the narcotics industry] to an end,” he argued.

Afghanistan’s climate and terrain are naturally conducive to poppy cultivation, which has allowed the country to create a multi-billion dollar industry surrounding illicit opiate production for decades. The nation is currently responsible for 80 percent of the world’s illicit opiate supply. The United Nations (U.N.) estimated the total value of Afghanistan’s illegal opium trade in 2017 at $6.6 billion, or 32 percent of the nation’s GDP. 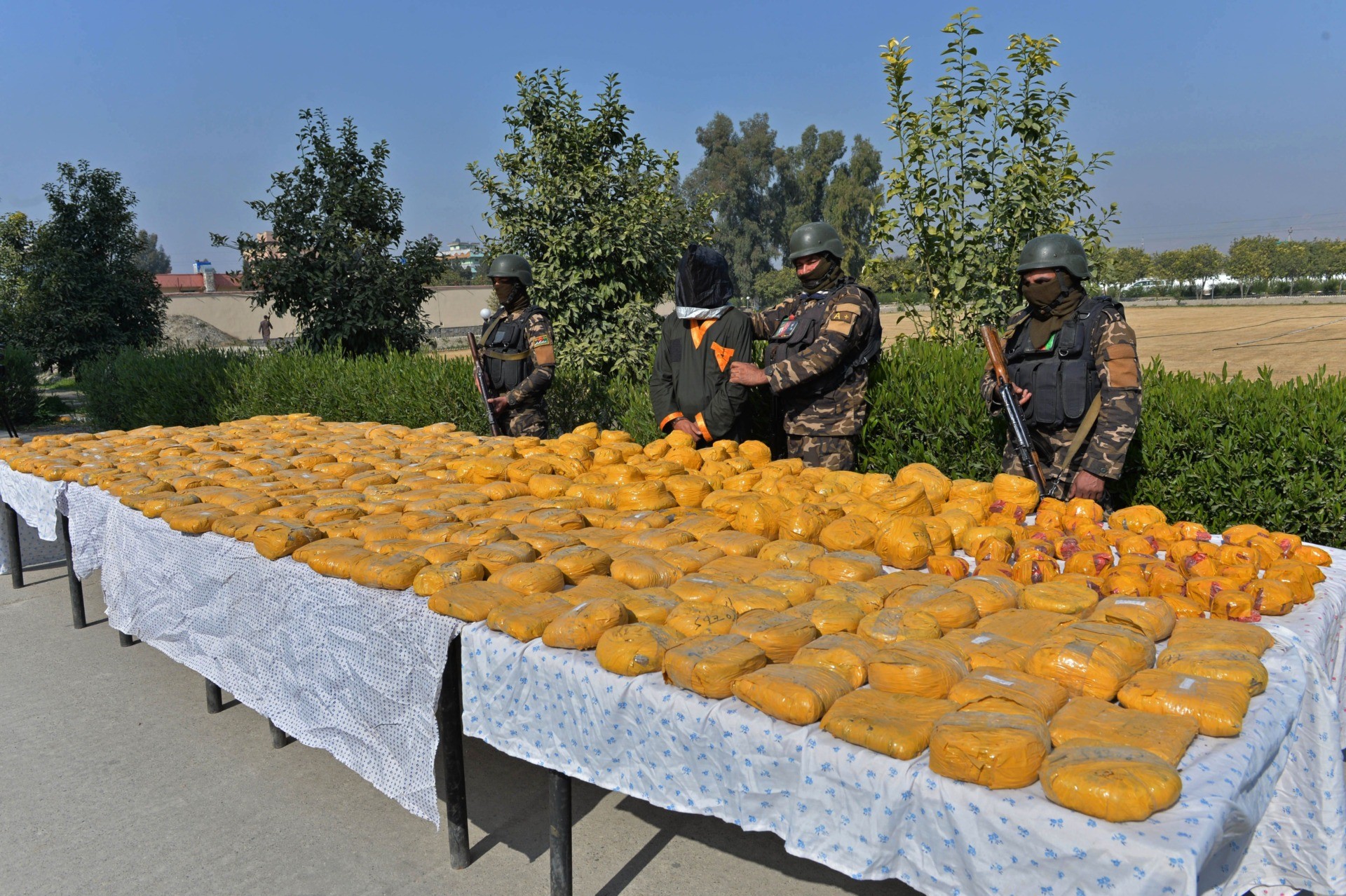 National Directorate of Security (NDS) forces stand guard along with a detained suspect (C) after bags containing Opium and Hashish were seized in an operation during a press conference at NDS headquarters in Jalalabad on February 4, 2021. (NOORULLAH SHIRZADA/AFP via Getty Images).

“[T]he value of the opiate-based economy exceeded by far, the value of Afghanistan’s legal exports of goods and services during 2016,” the U.N. noted.

The Taliban’s historic profit from Afghanistan’s opiate production seems to run counter to its stated aim of ruling the majority Muslim country under strict sharia, or Islamic law. The hardline Sunni Islam-based group confirmed to Reuters on August 17 that it would govern Afghanistan through a system of sharia moving forward, as it did when it previously ruled the country from 1996 to 2001.

The Taliban implemented a ban on poppy cultivation in Afghanistan in 2000, successfully halting production of the flower, which produces raw opium sap, to practically zero by 2001.

“The first American narcotics experts to go to Afghanistan under Taliban rule have concluded that the movement’s ban on opium-poppy cultivation appears to have wiped out the world’s largest crop in less than a year, officials said today,” the New York Times reported May 20, 2001.

“The American findings confirm earlier reports from the United Nations drug control program that Afghanistan, which supplied about three-quarters of the world’s opium and most of the heroin reaching Europe, had ended poppy planting in one season,” according to the newspaper.

Afghanistan’s poppy industry roared back to life after the U.S. invaded the country and ousted the Taliban from Kabul in the autumn of 2001, reaching its highest-ever production level in 2017.

“In 2001, if you remember, we had brought our narcotics production to zero in 2001 but our country was unfortunately occupied and then the way was paved for [the] reproduction of narcotics,” Taliban spokesman Zabihullah Mujahid told reporters at the August 17 press conference in Kabul.

“Even at the level of the government, everybody was involved,” he claimed. “But from now on, nobody is going to get involved, nobody can be involved in drug smuggling.”