China’s state-run Global Times on Tuesday was incensed at the United States for allowing international travel to resume, pointing to China’s own coronavirus surge as evidence that a “zero-tolerance policy” remains the “must-have strategy to contain the virus at the lowest cost.”

In the early days of the pandemic, China was vociferously opposed to travel bans and was fond of citing the World Health Organization’s (W.H.O.) opposition to support its position. China accused the United States of “manufacturing and spreading panic” by calling for restrictions on Chinese travel.

Chinese health officials blame the current outbreak of Chinese coronavirus, which has spread across 20 provinces, on a tour group of senior citizens from Shanghai. Last week, Chinese officials speculated the disease might have originated in India and spread through Mongolia to reach Shanghai, but have provided no evidence to substantiate these claims 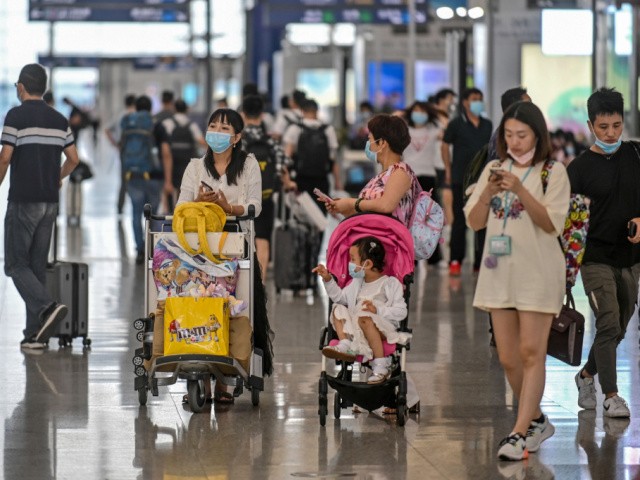 Passengers wearing facemasks walk across a hall following preventive procedures against the spread of the coronavirus in Pudong International Airport in Shanghai on June 11, 2020. (Hector Retamal/AFP via Getty Images)

The Global Times fumed that America is ending its pandemic travel bans after almost two years while “infections have been increasing again in Europe, given the colder temperatures and the fading of vaccine-induced immunity.”

What really irked the Chinese Communist Party (CCP) paper is that Western media has “cast doubts on China’s zero-tolerance policy to handle the epidemic” and refuses to acknowledge the tremendous benefits China supposedly enjoyed from its lockdowns:

Some epidemiologists told the Global Times that China has gained huge benefits in insisting on this approach including public health benefits, economic recovery and employment, and it’s not yet the right time to change the approach.

“We can’t abandon the zero-tolerance now, as given the global pandemic situation, changing our epidemic prevention policies and lifting strict controls would lead to a catastrophic outcome,” a senior public health expert close to the National Health Commission (NHC) told the Global Times on condition of anonymity in a recent interview.

Considering the overall health system situation, lifting the anti-epidemic measures means a sudden increase in infections, which will deliver a heavy blow to the health system and the country’s economic and social development, the expert said, noting that as there is a regional imbalance, abandoning the current approach will lead to significant consequences.

“Some Chinese epidemiologists believe that it’s still not time for Western countries like the US to lower border restrictions, although those countries made their decision based on the vaccination speed, but they fail to take other factors such as winter and the Delta variant into account,” the Global Times warned.

Editor-in-chief Hu Xijin sneered on Tuesday that America is adopting a “money over life” attitude and embracing “social Darwinism,” which left-wingers view as an insult meaning “improve society by killing off the weak.”

“We adhere to humanitarianism, but a dynamic zero-case policy should be economically effective in the future, with advantages outweighing that of a full lifting of a travel ban, to be sustainable in the long run,” he advised.

Guan endorsed the American approach, arguing that “building a shield of protection using vaccines” and learning to cope with a virus that has “a foothold in mankind” is more logical than employing extreme measures in an impossible quest to eliminate it. 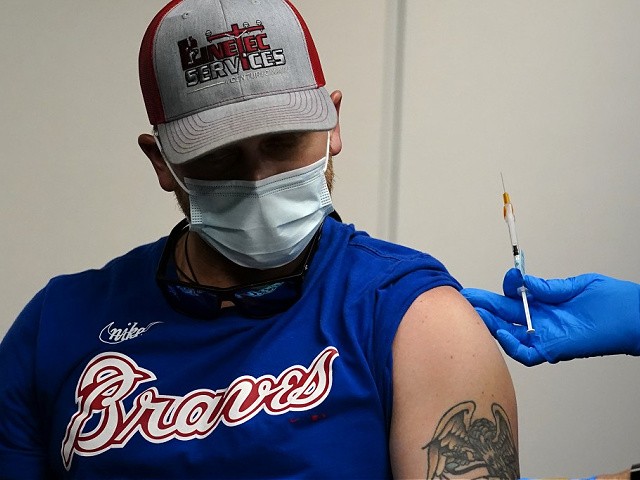 Atlanta Braves fan Reid Bonner gets a coronavirus vaccine before a baseball game between the Braves and the Philadelphia Phillies, Friday, May 7, 2021, in Atlanta. (AP Photo/John Bazemore)

“Local governments are adopting zero tolerance to these scattered cases, but if that remains the case, I think our economy will collapse,” Guan warned.

Guan noted that during the SARS outbreak of 2002-2003, he was able to identify the intermediate animal host that was spreading the disease and contain it before it could become fully adapted to humans.

On the other hand, despite two years of intense effort, no one has been able to identify the animal intermediary that could have spread Chinese coronavirus to humans, and the virus fully adapted to humans with incredible speed – two facts that lead a growing number of analysts to believe the virus emerged from a Chinese laboratory instead of spreading through nature. Guan himself predicted early in 2020 that the Chinese coronavirus would be far more difficult to contain than SARS.