Government authorities in China’s northeastern Russian border city of Heihe declared a “people’s war” against the community’s latest coronavirus epidemic on Sunday, offering rewards of 100,000 yuan ($15,640) to people who “provide clues” to local officials that help them trace the outbreak’s origins, the Global Times reported Monday.

Heihe reported a record high of 44 new daily coronavirus cases on November 4 and has been under lockdown orders since October 28 after city officials detected a new outbreak of the disease in the city on October 27. The epidemic in Heihe, located in China’s Heilongjiang province, is linked to a nationwide coronavirus resurgence that has swept across 20 Chinese provinces since October 17. China’s ruling Communist Party has officially blamed the new cases on foreign sources in Mongolia, despite none of the first identified patients triggering the outbreak traveling outside of the country.

“Tracing the sources of the virus and its transmission chain is the top priority and a people’s war on epidemic prevention and control is needed,” Heihe’s municipal government said in a statement issued November 7.

“It is hoped that the general public could actively cooperate with the tracing of the virus and provide clues to the probe,” the press release read.

“To those who provide valuable clues to help find the origins, the government will provide a reward of 100,000 yuan [$15,640],” according to the announcement.

Local Chinese Communist Party (CCP) officials in Heihe warned that people “who intentionally conceal or refuse to provide true information that affects the probe” will face “severe punishment in accordance with relevant laws and regulations.” 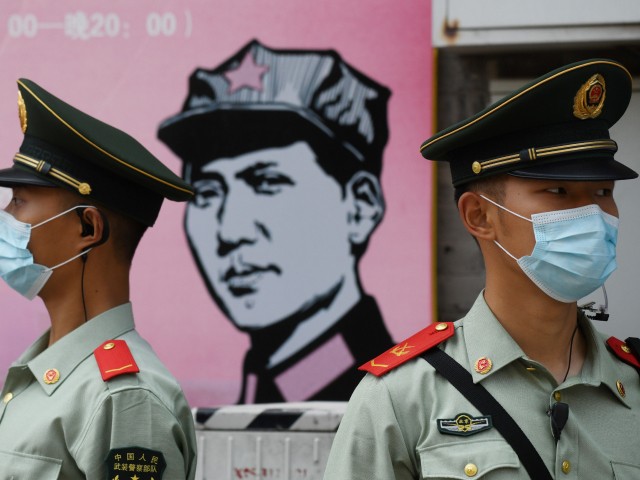 Paramilitary police officers stand guard in front of a poster of late communist leader Mao Zedong on a street south of the Great Hall of the People during the opening session of the National People’s Congress (NPC) in Beijing on May 22, 2020.(Greg Baker/AFP via Getty Images)

“Those who have committed slight violations and reported themselves actively could be pardoned,” the statement claimed.

The city’s government urged residents to “immediately report to the police if they discover any clues related to crimes like animal smuggling, illegal hunting, and cross-border fishing.”

The Blagoveshchensk-Heihe highway bridge and its port facility officially opened on September 10.

“The … bridge will serve as a supplement to the existing rail link with Russia via Northeast China’s ports of Manzhouli and Suifenhe, facilitating trade cooperation between Northeast China and the Russian Far East,” Zhang Hong, an Eastern European studies expert at the Chinese Academy of Social Sciences, told China’s state-run Global Times on September 9.

Zhang added that the bridge “will help boost people-to-people exchanges and imports of petrochemical products from Russia.”

“Russia’s petrochemical products can be directly transported to China via the bridge instead of being shipped to other more distant ports,” he noted.

The value of trade between China and the Russian Far East in the first half of 2021 was $5.82 billion, the Global Times reported on September 9 citing official Russian government data. The figure marked “a year-on-year increase of 24 percent.”

“China maintained its position as the largest trading partner and largest source of foreign capital in the Russian Far East,” according to the newspaper.

Heihe government authorities shut down the Blagoveshchensk-Heihe highway bridge’s port facility on October 28 as part of a city-wide lockdown to limit the spread of coronavirus.

“Traffic was also restricted as a part of the lockdown. An employee at the Heihe customs said Wednesday [October 27] was the last day that goods were allowed to enter Heihe through customs,” the Global Times reported on October 28.

“Heihe customs had resumed freight handling in recent months since a coronavirus-triggered lockdown in 2020. Passenger transport had not yet restarted,” the newspaper’s unnamed source at Heihe customs said.

“Before 2020, Heihe customs had never been completely shut down,” the man noted.

The closure of Heihe’s bridge port “has added some pressure to the city’s economy, a large part of which relies on trade with Russia,” the Global Times observed at the time.