The International Olympic Committee (IOC) again defended China on Thursday over the ongoing disappearance of tennis champion Peng Shuai, claiming that she appeared “safe … given the difficult situation” in a video call following her accusation of rape against a top Chinese Communist Party official.

Peng disappeared in November after posting a long, dramatic statement to her Weibo account in which she accused Zhang Gaoli, a retired senior communist official now running China’s 2022 Winter Olympics Leading Group, of raping her after multiple sexual advances.

In the post, Peng revealed that she had engaged in a long-term consensual affair with Zhang after he initially “forced [her] into sex” and described her accusation as “striking a stone with an egg,” suggesting it would lead to her destruction.

Weibo is China’s largest social media site, heavily regulated by Party censors. The post rapidly vanished from the site, as did Peng.

Chinese state media has since published several undated videos and photos of Peng, claiming them to prove she is safe. The only proof of life from Peng that exists outside of government media images comes from the IOC: an image that claims to show IOC President Thomas Bach on a video call with Peng last week. The monitor showing Peng appears blurred and the image shows no indication of when it was taken.

“Peng” has not addressed her allegations against Zhang in any of her public appearances or statements through Chinese government outlets or the IOC since the initial Weibo post.

The Women’s Tennis Association (WTA) postponed all its events in China indefinitely on Tuesday in response to the ongoing saga, asserting that it could not guarantee the safety of players or staff given her disappearance. 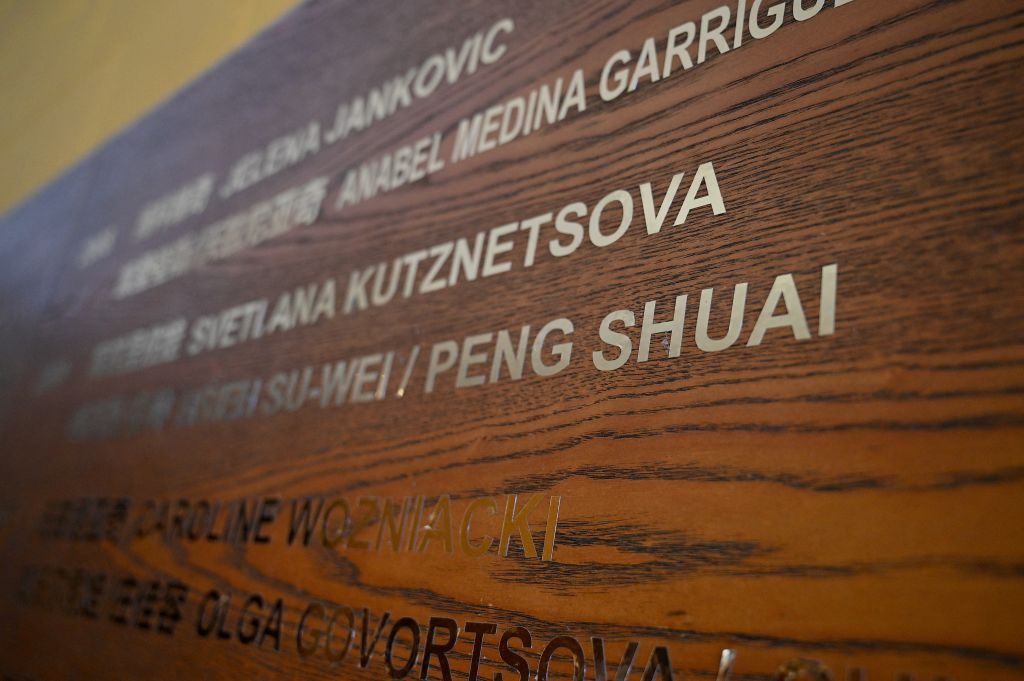 The name of Chinese tennis player Peng Shuai is seen at a wall in the Diamond Court at the National Tennis Center where the ATP and WTA China Open tennis tournaments were hosted annually before the start of the Covid-19 pandemic, in Beijing on December 2, 2021. (NOEL CELIS/AFP via Getty Images)

“We share the same concern as many other people and organisations about the well-being and safety of Peng Shuai. This is why, just yesterday, an IOC team held another video call with her,” the statement read in part. “We have offered her wide-ranging support, will stay in regular touch with her, and have already agreed on a personal meeting in January.”

The “personal meeting” arrangement reportedly occurred during the first call, when Bach noted that he would be in Beijing for the Winter Olympics, scheduled for February, and inviting Peng to meet.

The IOC appeared to concede for the first time since its involvement in the situation that Peng was struggling through a “difficult” time and potentially facing danger at the hands of the Communist Party. Recalling Bach’s first conversation with Peng, it claimed that officials found her “safe and well, given the difficult situation she is in” – a conditional evaluation unlike its previous claim that Peng was “safe and well,” “fine,” and “relaxed.”

The organization added a defense of its support for repeated Chinese government claims that Peng was safe, branding it “quiet diplomacy.”

“There are different ways to achieve her well-being and safety. We have taken a very human and person-centred approach to her situation,” the IOC said in its statement. “Since she is a three-time Olympian, the IOC is addressing these concerns directly with Chinese sports organisations.”

The IOC statement did not address the fact that the person in charge of China’s top Olympics organization is the person Peng claimed raped her.

Unlike last week, the IOC did not publish any alleged images of the video call and told CNN it had no plans to do so.

The WTA, which presides over every major professional women’s tennis event, announced an indefinite suspension of contests scheduled to occur in China on Wednesday.

“None of this is acceptable nor can it become acceptable,” a statement from WTA chairman Steven Simon read.

“[W]ith the full support of the WTA Board of Directors, I am announcing the immediate suspension of all WTA tournaments in China, including Hong Kong,” Simon wrote. “In good conscience, I don’t see how I can ask our athletes to compete there when Peng Shuai is not allowed to communicate freely and has seemingly been pressured to contradict her allegation of sexual assault. 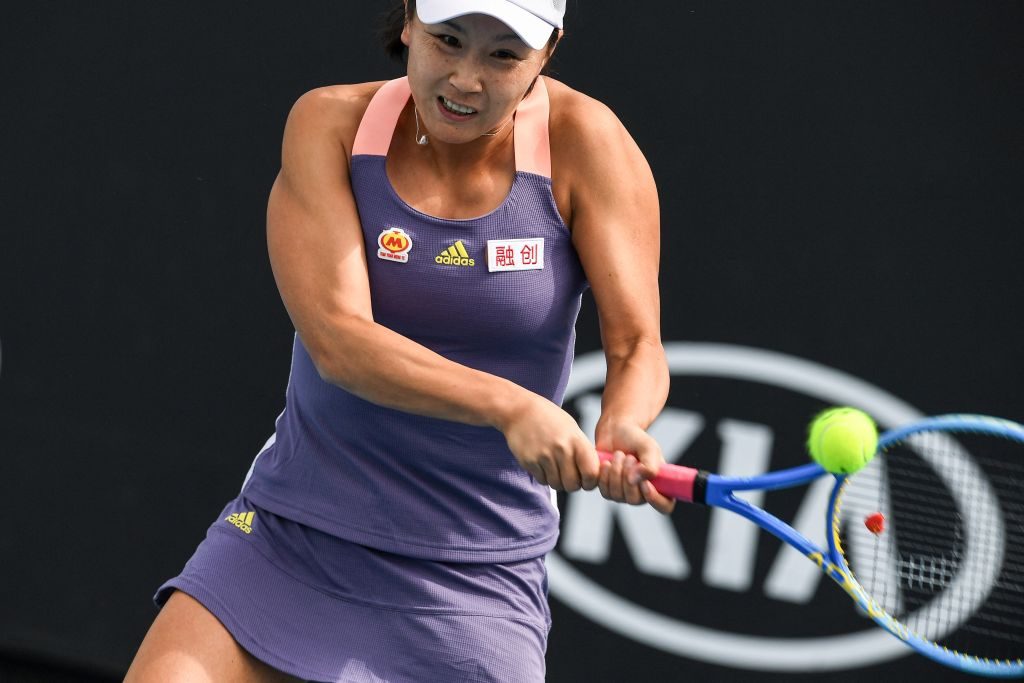 China’s Peng Shuai hits a return against Japan’s Nao Hibino during their women’s singles match on day two of the Australian Open tennis tournament in Melbourne on January 21, 2020. (GREG WOOD/AFP via Getty Images)

China’s government-run propaganda machines appeared to use this fact to dismiss the tournament’s suspension as meaningless virtual signaling. The Global Times, China’s most belligerent English-language propaganda outlet, published a video by editor-in-chief Hu Xijin on Twitter in which he observed that the ongoing Chinese coronavirus pandemic would have likely resulted in those tournaments not happening, anyway.

The Global Times‘ Peng Shuai coverage has remained only on Twitter and Facebook – sites that Chinese citizens cannot legally visit. Peng has all but disappeared from Global Times news coverage since November, when she published her Weibo post about Zhang.

“In fact, in light of [the pandemic], no international sports events were held in China last or this year,” Hu stated. “Till now, only the 2022 Winter Olympics will be held in Beijing as scheduled. Even if the WTA did not cancel tournaments in China, it is highly likely those events could not go ahead due to the continuing episode.”

“Boycotting events … that only have a slim chance of being held in an attempt to garner attention for himself [Simon] and the WTA,” Hu jeered.

WTA’s coercion has deprived Chinese tennis star Peng Shuai of freedom of expression, forcing her to complain in accordance with the imagination and expectations of Western public opinion, fabricating that she has lost her freedom: Editor-in-Chief Hu Xijin #HuSays pic.twitter.com/li8HHTKBL8

Hu then went on to bizarrely claim that the WTA was “seriously coercing” Peng and had “deprived Peng of freedom of expression.”

Chinese Tennis Association (CTA), through a Global Times Facebook post, condemned the WTA for allowing alleged “fictitious information” to damage its relationship with the communist country.

“It not only beset and hurt the relevant athlete herself, but will also severely harm the female tennis players’ fair opportunities to compete. It will damage the interest of the entire sport of tennis, the CTA said,” according to the Times.

The Global Times on Facebook claimed that the Chinese Foreign Ministry also condemned the WTA on Thursday for its decision, but no discussion of the topic appears in the official English-language transcript of Thursday’s press briefing, where the condemnation allegedly occurred.