Parents in South Korea have expressed “anger” in recent days against a looming federal mandate that will require children aged 12 to 17 years to provide proof of vaccination against the Chinese coronavirus to enter public spaces “frequented by students, including cram schools, internet cafes, and public study rooms” starting in February, Yonhap reported Monday.

South Korea’s federal government announced on December 3 it would expand an existing coronavirus “vaccine pass” system to include anyone above the age of 12, beginning in February. The edict requires school-age children and teenagers “to present a certificate of vaccination against COVID-19 [Chinese coronavirus] or a negative test result to be allowed into restaurants, cafes and other multi-use facilities frequented by students,” according to Yonhap.

The South Korean news agency noted on December 6 that many students and parents have “voiced fury” at the impending vaccine requirement since it was revealed on December 3. Those opposed to the order have denounced it via multiple online petitions as “discrimination against those not vaccinated” and “effective coercion for adolescents to get vaccinated.”

One online petition against the vaccine mandate “was filed on the website of Cheong Wa Dae,” or the office of the South Korean presidency, on Friday, according to Yonhap. The entreaty, led by a woman who identified herself as a mother of four children, garnered 74,000 endorsements within 72 hours of its posting. 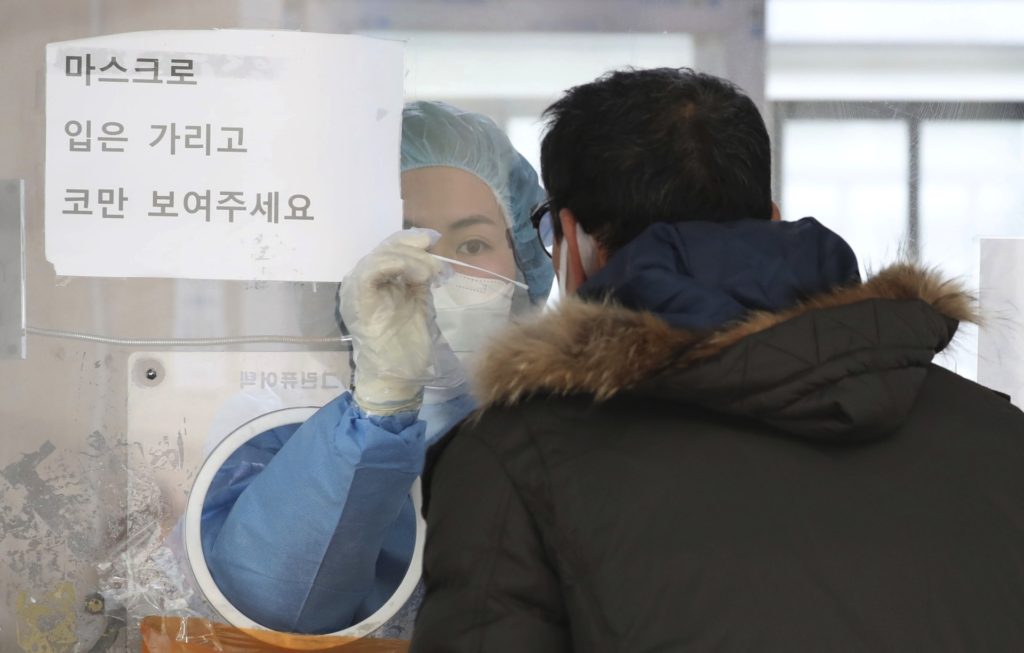 A medical worker wearing protective gear in a booth takes a sample from a man at a temporary screening clinic for the coronavirus in Seoul, South Korea, Saturday, Dec. 4, 2021. South Korea again broke its daily records for coronavirus infections and deaths and confirmed three more cases of the new omicron variant as officials scramble to tighten social distancing and border controls. (Park Mi-so/Newsis via AP)

“I believe cram schools are not a place where people remove a mask and eat … I am curious about why the vaccine pass needs to be extended to children when there is a considerable number of breakthrough infection cases,” the petitioner wrote.

A “breakthrough” infection refers to a case of coronavirus contracted by a person after he or she has received a full dosage of a Chinese coronavirus vaccine. “Cram schools,” also known as “hagwon” in Korean, are privately run schools in South Korea that provide after-school tutoring, often to prepare students for upcoming exams.

“This measure is different from the previous ones as it neglects the cram schools’ efforts to control infectious disease and puts the blame of infection and the responsibility to encourage vaccination on cram schools,” Lee Yu-won, the head of the Korea Association of Hagwon, said in a press release issued December 3.

“It is impossible for students to go through PCR tests multiple times to go to cram schools or study rooms,” Lee said. “Cram schools are different from other multiuse facilities as they can keep tight track of visitors.”

“PCR,” or “polymerase chain reaction,” tests are used to determine if individuals carry “Covid-19,” also known as the Chinese coronavirus. “Covid-19” is the name of the disease caused by SARS-CoV-2, a type of coronavirus.

South Korean government officials said on December 6 they chose to expand the nation’s federal “vaccine pass” system to children as young as 12 years old on December 3 after learning of an emerging new variant of COVID-19 called Omicron.

“The government initially allowed teenagers to get vaccinated as they chose. But the fifth wave of COVID-19 and the omicron variant have changed the situation,” South Korean Vice Minister of Education Jung Jong-chul told reporters at a press briefing in Sejong.

“We will have to persuade students and their parents on being vaccinated,” Jung added.