The prime minister of Japan, Kishida Fumio, told reporters on Tuesday his country would make its “own decision” on participating in the 2022 Beijing Winter Olympics – a response to President Joe Biden refusing to boycott the event despite China’s ongoing genocide of the Uyghur people and other human rights crimes.

Japan’s position on the Olympics is of particular importance as Tokyo hosted the last round of Games, the 2020 Summer Olympics. The Tokyo Games were held mere months ago after a year-long delay prompted by the Chinese coronavirus pandemic, which began in Wuhan, China, in late 2019. The Chinese Communist Party caused a local outbreak of infectious disease to become a pandemic by hosting superspreader events, silencing doctors who shared hygiene tips with coworkers, and lying to the World Health Organization (W.H.O.) about the contagious nature of the novel Chinese coronavirus.

Like other world leaders, Kishida is facing growing questions regarding Japan’s participation in the Olympics after the White House confirmed that the United States would play. Human rights activists have spent much of the past year urging nations to boycott the Olympics in the face of China’s long list of human rights abuses against its own people. While the Uyghur genocide is perhaps the most high-profile human rights atrocity currently happening in China, the Communist Party is also implementing policies to erase Tibetan and Mongolian cultures, disappearing human rights attorneys and activists, and severely abusing the rights of the faithful.

Calls for boycotts have intensified in light of the disappearance of Peng Shuai, a Grand Slam-winning tennis champion who is among the most recognizable faces of the sport in China. Peng accused the former head of the Chinese Olympic Committee of raping her before abruptly disappearing from the public eye. Beijing has yet to guarantee her safety. The International Olympic Committee (IOC) has defended the Chinese regime, claiming Peng appeared “fine” in recent video chats and urging the world to move on. 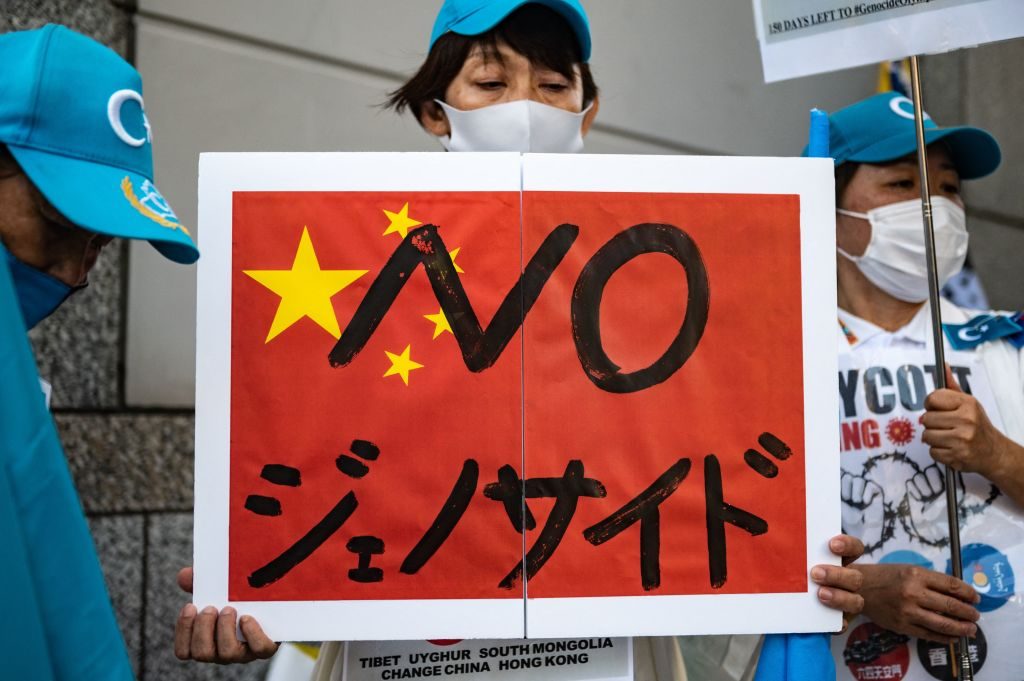 Activists take part in a protest calling for a boycott of the Beijing 2022 Olympic Games over China’s human rights record, in Tokyo on October 2, 2021. (PHILIP FONG/AFP via Getty Images)

Japan’s most prominent tennis champion, Naomi Osaka, was among the first in the sport to express concern and demand that China prove Peng’s safety following her disappearance.

The Japanese prime minister offered no indication as to what his ultimate decision would be on Olympics participation on Tuesday when asked about Biden’s decision to participate.

“We would like to make our own decision from the standpoint of our national interests,” Kishida said, according to Japan’s Kyodo News.
Foreign Minister Hayashi Yoshimasa was slightly more forthcoming, offering that Japan would issue a formal decision “at the right point” and the government would take into consideration human rights.

“Taking account of various factors comprehensively, we’ll make a decision on the government’s response to the games at the right point,” Hayashi said. “Japan thinks it is important that universal values of the international community, including freedom, respect for basic human rights and the rule of law, will be guaranteed also in China.”

China participated in the Tokyo Games, which faced no human rights objections, but regularly antagonizes Japan by denouncing Imperial Japan’s crimes in the past century. On Tuesday, the anniversary of Imperial Japan’s bombing of Pearl Harbor, Chinese Foreign Ministry spokesman Zhao Lijian demanded Japan “adopt a right attitude, deeply reflect upon the Japanese militarism’ [sic] Fascist atrocities and crimes against humanity and win trust from people around the world with concrete actions.”

Zhao did not mention America in his statement on the bombing of Pearl Harbor. 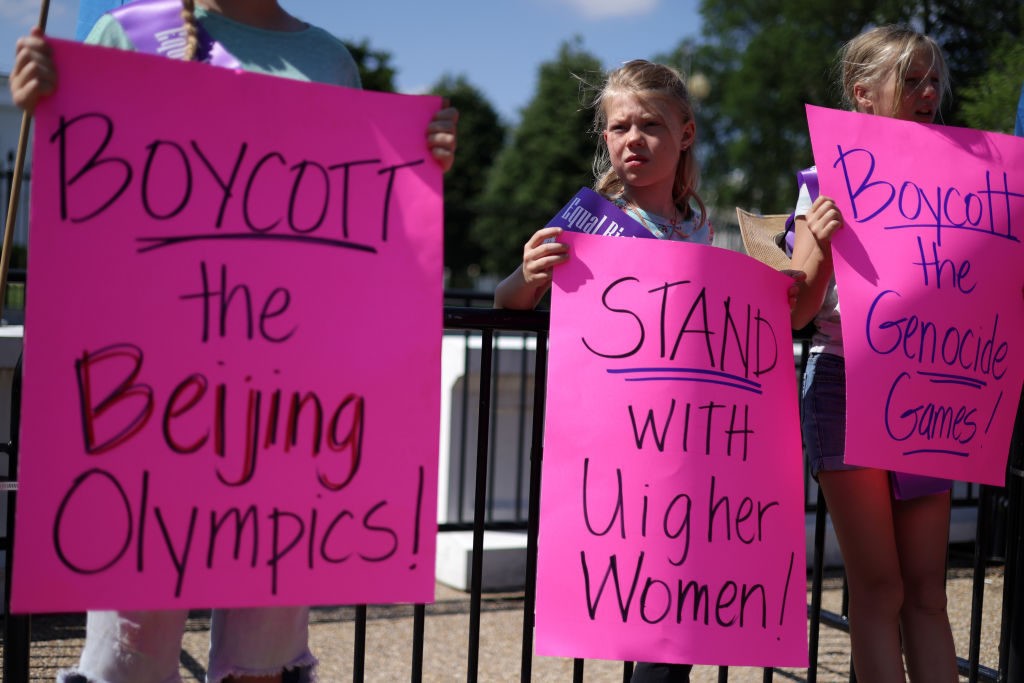 Young girls hold signs as they participate in a demonstration against the 2022 Olympics in China, at Lafayette Square May 27, 2021 in Washington, DC. (Alex Wong/Getty Images)

Activists calling for a boycott of the Beijing Games in Japan have lamented that their government has remained mostly quiet about the situation and about human rights atrocities in China generally. Japanese officials have expressed “concerns” about the Uyghur genocide but Japanese companies like Muji and Uniqlo have openly boasted of sourcing cotton from East Turkistan, where the Communist Party systematically enslaves Uyghurs in cotton fields, and Tokyo has done little to support human rights groups.

“It’s not only the government, but also, the majority of the politicians in Japan, especially the National Diet members of the ruling parties [who] are silent on the Beijing Olympics,” Hidetoshi Ishii, the vice president of the Free Indo-Pacific Alliance told Breitbart News in September regarding his group’s campaign supporting a boycott. “That is because they’ve been afraid that if Japanese politicians criticized the Beijing Olympics, China would criticize the Tokyo Olympics … In my opinion, those politicians are such cowards, but unfortunately, that is the reality.”

The Free Indo-Pacific Alliance joined over 150 organizations in signing a letter published in February calling for a global boycott on the Beijing Olympics.

“[A]nything less will be seen as an endorsement of the Chinese Communist Party’s authoritarian rule and blatant disregard for civil and human rights,” the letter read in part, noting that, following the 2008 Beijing Summer Olympics, “not only did China’s human rights record not improve, but violations increased substantially without rebuke.”

At press time, no country has announced a boycott of the 2022 Beijing Winter Olympics.