An activist group called the Coalition to End Forced Labor in the Uyghur Region on Tuesday charged the International Olympic Committee (IOC) with refusing to answer if slaves are making its merchandise for the Beijing Winter Games.

The Coalition concluded Tuesday that “forced labor cannot be ruled out in Beijing Olympics merchandise” because the IOC “refused to discuss due diligence about forced labor” after the United States passed the Uyghur Forced Labor Prevention Act in December. The new law presumes all merchandise from China’s Xinjiang province is tainted with forced labor unless import companies can prove otherwise.

According to the Coalition, after eight months of cooperation the IOC stopped meeting with its representatives a few weeks before the beginning of the Beijing Games. The IOC rejected the group’s “proposed terms for substantive, constructive, and mutually respectful two-way dialogue.”

“We regret to conclude that your organization and the IOC will not be able to engage in a dialogue this time as a result of differences in approach, including regarding scope, process and confidentiality,” the IOC told the Coalition in an email. 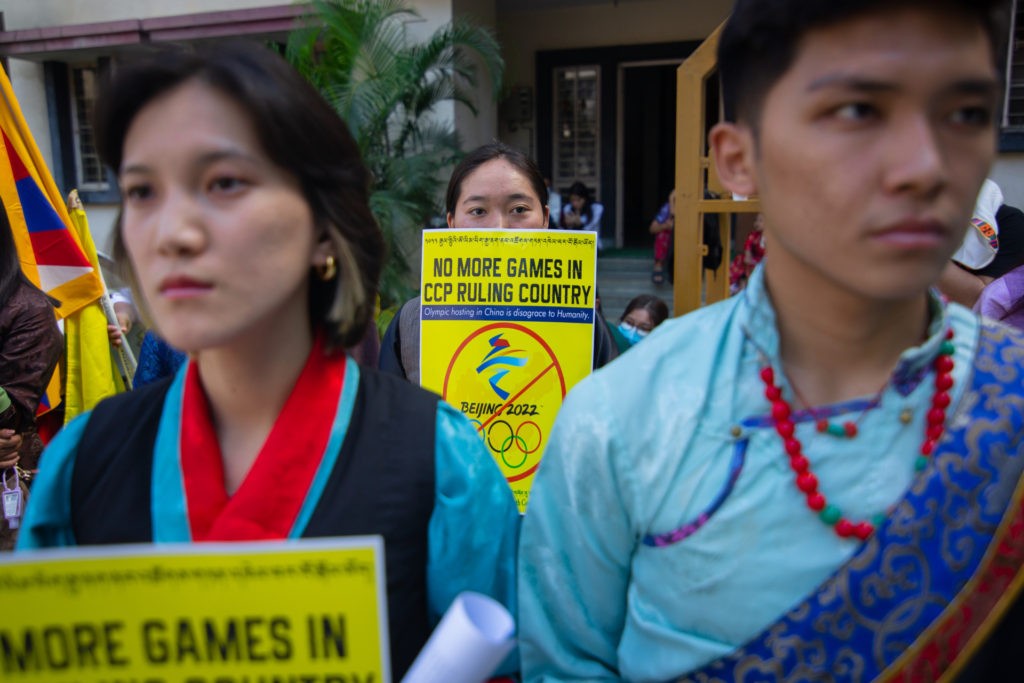 Tibetan students hold up placards calling for the boycott of the 2022 Beijing Winter Olympics during a protest on December 10, 2021 in Bengaluru, India. (Photo by Abhishek Chinnappa/Getty Images)

The Olympic committee essentially told the Coalition it has “responsible sourcing” policies in place and promised it would be “strengthening” them further as the Games draw near, but refused to explain how it enforces those policies, or why some highly questionable providers do not appear to have been investigated.

The IOC made a counter-offer of a “one-time active listening exercise” that would be kept strictly confidential. The Coalition dismissed that offer as unacceptable and inadequate.

The Coalition noted some Olympic apparel suppliers have admitted to using Xinjiang products, and at least one of them, Anta Sports, is publicly defiant about continuing to use cotton from the province where Uyghur Muslims are forced into concentration camps and sold into corporate slavery.

“The IOC has failed to offer credible evidence that there are no products made with forced labor in the thousands of items of Olympic-branded merchandise sold or worn in connection with the Beijing Winter Games. If the IOC is not willing to disclose such steps, then it must explain why it will not,” the Coalition said. 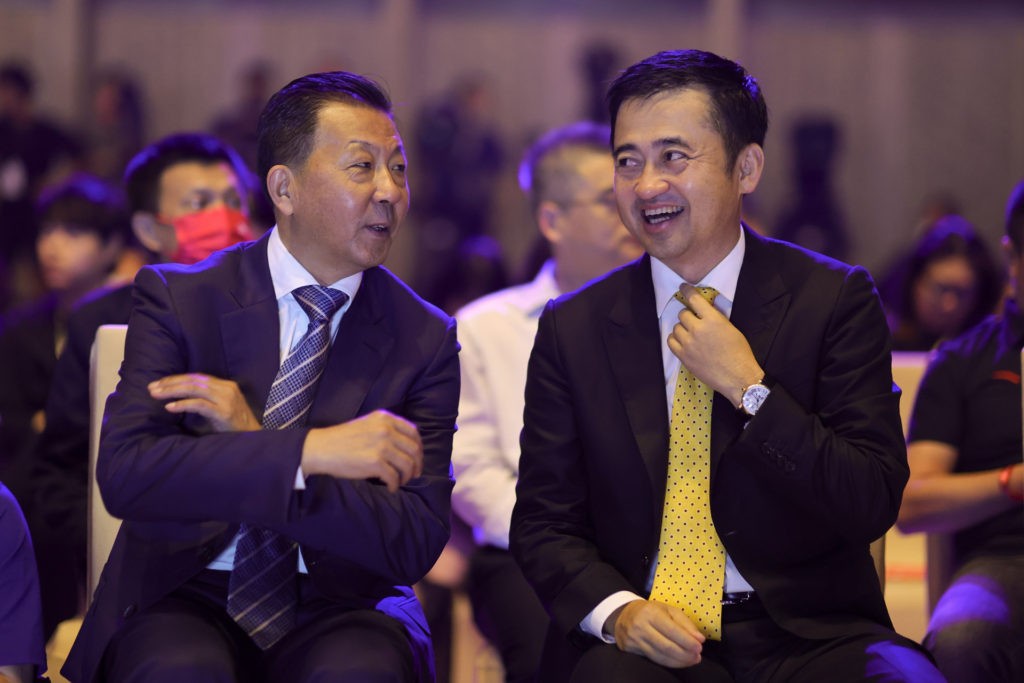 “With one month to go before the start of the Beijing Winter Games, the icy indifference of the IOC to labor and human rights is absolutely chilling,” said Coalition steering committee member and former U.S. Deputy Assistant Secretary of State for Democracy, Human Rights, and Labor Bennett Freeman.

Freeman told the New York Times (NYT) on Tuesday the IOC “either had nothing to say or show on due diligence on forced labor, or they were unwilling because they won’t cross swords with Beijing,”

The NYT noted other human rights activists have accused the IOC of “dismissing their concerns” about the Beijing Winter Games and refused to answer questions about how it is vetting suppliers for products tainted with forced labor. Some of those activists noted the IOC was much more responsive to their concerns about human rights and labor issues when Russia and Japan hosted the Games.

“The IOC has no idea whether the thousands of Olympic-branded products its corporate sponsors and other partners are selling are made with Uyghur forced labor. What’s worse, Olympic leaders apparently don’t care, as evidenced by their failure to perform and disclose meaningful due diligence,” said Scott Nova, executive director of the Worker Rights Consortium, another member of the steering committee.

“As a sister of a victim of this genocide who is paying the price in some dark dungeon for my activism in the U.S., I am very disappointed that the IOC is treating Uyghurs’ lives as disposable,” said Rushan Abbas, executive director of the Campaign for Uyghurs.

Abbas was a Uyghur student activist in Xinjiang before moving to the United States in 1989. After she delivered a speech about Chinese human rights abuses in September 2018, her sister and aunt were kidnapped by Chinese police on the same day, even though they lived hundreds of miles apart.

China extralegally imprisoned her sister Gulshan for 27 months before informing her family, on Christmas Day 2020, that she has been sentenced to 20 years in prison. Abbas believes Gulshan, a trained medical doctor, has been sold into slavery by the Chinese regime. 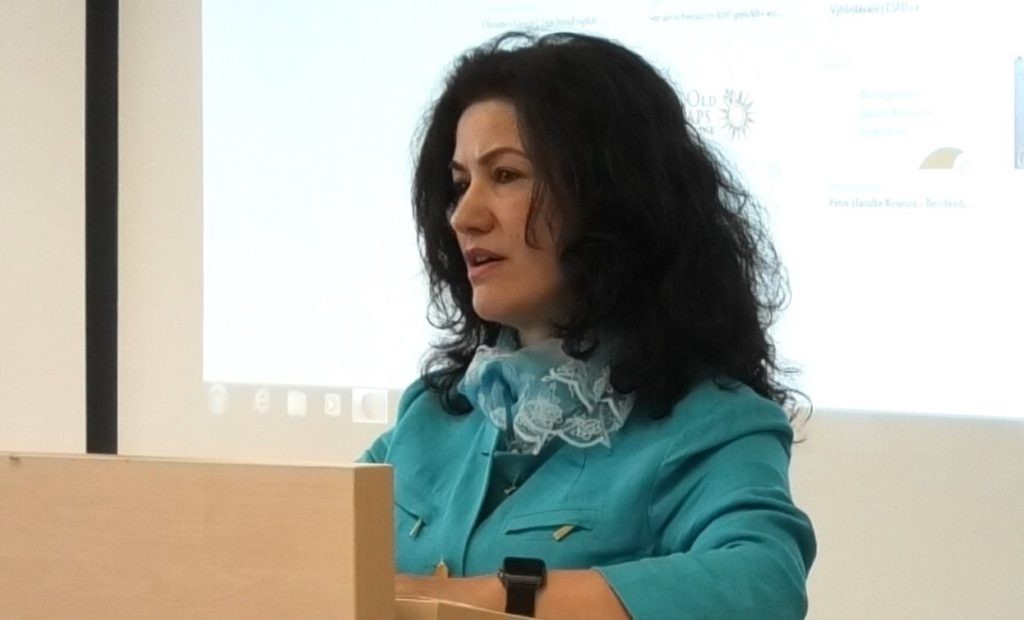 “The IOC’s disrespect for directly affected rights-holders, in this case the Uyghur people, is clearly reflected in their unwillingness to engage in reasonable dialogue. We therefore can have no confidence – nor can athletes, sponsors, or virtual spectators have confidence – that any of the thousands of items of Olympic-branded merchandise are not stained with the blood and sweat of my people,” Abbas said in the Coalition statement Tuesday.

Other members of the Coalition criticized the IOC for not offering fully transparent investigations of forced labor allegations, and for trusting corporations and the oppressive Chinese Communist regime to investigate itself.

“While generic concerns have been expressed in the past about Beijing 2022’s product sourcing, the IOC has not been approached about any specific case or situation, including by the Coalition to End Forced Labor in the Uyghur Region,” the IOC responded in a statement to the Wall Street Journal on Tuesday.

The IOC added it was “disturbed” that members of the Coalition gave copies of its emails to the media, describing the disclosures as a “breach of trust” that demonstrates the activists were not sincerely “interested in a meaningful or constructive exchange.”