China’s state newspaper, the Global Times, blasted legendary sportscaster Bob Costas for daring to criticize China’s woeful record on freedom of the press and criticizing the IOC for allowing the Winter Olympics to be held in Beijing.

In an interview with CNN’s Brian Stelter, Costas said that the IOC was deserving of whatever “disdain” critics wanted to heap upon them for choosing a country that openly spies on athletes and journalists to host the Games.

“We should preface this by saying that no one could have anticipated COVID, no matter what the venue is,” Costas said, according to Poynter. “But the IOC deserves all of the disdain and disgust that comes their way for going back to China yet again. They were in Beijing in 2008. They go to Sochi in 2014. They’re shameless about this stuff. And so, this takes place not only amid COVID, as did the Tokyo Games of a year ago. But as you mention, the restrictions on press freedom and the sense that everyone there is being monitored in some way.”

The Global Times then fulfilled its role as voicebox and defender of the communist regime by attacking Costas for showing “poor personal traits and low professional ethics.”

“Costas may ignorantly believe that he can represent the world,” said Li Haidong, a professor at something called the Institute of International Relations of the China Foreign Affairs University. “Arrogance, prejudice, rude – all the negative words seem accurate to describe him. No educated person would use such irrational words on the IOC. The Olympic Games is an international event with maximum coordination between athletes and sports officials from most countries worldwide. It is far more authoritative and reliable than a commentator who talks nonsense about the IOC.”

The Global Times, which represents only the perspective of communist China and not the “Globe,” then went on to blast U.S. journalists for linking “sports with politics.”

The Times even turned on CNN’s Brian Stelter for mildly claiming that journalists covering the Olympics would face a “unique challenge” during the Beijing Winter Olympics of “balancing politics and sports.”

China’s abuses when it comes to freedom of the press – and many, many other things – are well-known. In addition to being the #1 human rights abuser globally, according to UN Watch, the communist nation is also guilty of all the free press violations and spying that Costas alleged in his comments. 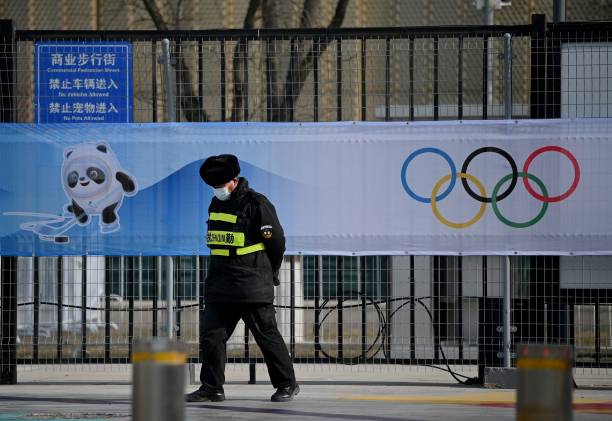 A security personnel walk in front of a picture of Bing Dwen Dwen, a mascot of the 2022 Beijing Winter Olympic Games and the Olympic Rings, at the Wukesong Sports Centre, the venue for the ice hockey competition, in Beijing on January 18, 2022. (Photo by Noel Celis / AFP) (Photo by NOEL CELIS/AFP via Getty Images)

Last week, for example, an official with the Beijing Olympics international relations department publicly announced that any “behaviour or speeches that is against the Olympic spirit, especially against Chinese laws and regulations,” will be “subject to certain punishment.”

In fact, the situation has become so bad that Team USA officials have told athletes to leave their personal electronics at home and purchase burner phones for the upcoming Games, to thwart Chinese spying efforts.