China’s state-run Global Times slammed Australia for its defiance of Beijing under Morrison, whose government insisted on investigating the origins of the Wuhan coronavirus pandemic:

Australia’s sudden turn to a hawkish anti-China stance is the most inexplicable phenomenon of international relations in recent years. China and Australia are thousands of miles apart. There are no territorial disputes or historical grievances between the two countries. During the most part of the past 50 years of their diplomatic relations, neither ideological differences nor geopolitical disputes have affected the normal, mutually beneficial exchanges between the two countries. However, this stable and mutually beneficial situation had been severely damaged by the Australian side in just a couple of years, which is lamentable.

In this election, China policy was a key issue for Australia’s two parties to attack each other. Morrison, in particular, put his tough stance against China at the forefront of his election campaign. However, Saturday’s results once again showed that Australians care more about their government’s commitment and actions on issues related to people’s well-being, such as climate change, soaring prices, and wages, than the unwarranted “China threat.” This can be seen as a rectification and balance within Australia for its paranoid anti-China path and its approach of blaming China as a way out of all its problems in the past few years.

“Rectification” is a term the Chinese Communist Party uses for brainwashing dissidents back into obedience. The Global Times looked forward to a rectified Australia under Albanese moving out of Washington’s orbit and deeper into Beijing’s shadow:

It can be said that in recent years Canberra has provided the world with a negative example of how to deal with China. Even Australia’s neighbor, New Zealand, of which China is also its largest trading partner, has advised the Australian government to show due respect to China. Australia and New Zealand are facing the same geopolitical environment and have similar political systems, which shows that what Canberra called “China threat” and “economic coercion” cannot stand up to scrutiny. Canberra often acts in line with Washington’s playbook and assumes Washington’s role in how it thinks about its China policy, but in fact Australia’s national interests are quite different from those of the US.

The Chinese Communist paper applauded Albanese for his “rationality” toward China and hoped he would approach Beijing in a “mature manner” after Morrison’s years of determined resistance.

Another Global Times editorial on Sunday suggested Albanese will have an opportunity to show off his rationality towards China at the upcoming summit in Japan of the Quadrilateral Security Dialogue between the U.S., Japan, India, and Australia, better known as the “Quad.”

The Global Times billed the Quad summit as “the first test of the political wisdom of the new Australian government” after years of “reckless moves” by Morrison. It suggested Albanese might bend his knee by pulling back from the Morrison administration’s commitment to countering Chinese influence in the South Pacific, and perhaps by reducing Australia’s support for U.S. initiatives in the region to focus on domestic “economic recovery” and “social livelihood issues.”

The Chinese paper fumed at Morrison for his full-throated support of the Quad and his commitment to “tempering China’s strength.”

The editorial groused at Albanese for making some statements critical of China’s aggressive posture – especially with respect to the Solomon Islands – and acknowledged the new prime minister could not be expected to break with the Quad or the United States but advised him to make some conciliatory gestures to “repair the damage” with Australia’s largest trading partner, China.

Nikkei Asia on Sunday noted Australia’s allies are nervous about how conciliatory toward China the Albanese administration might be.

British Prime Minister Boris Johnson, for example, made a point of reminding Albanese about Australia’s commitment to the AUKUS trilateral security alliance, which was expressly created to check Chinese aggression.

“I look forward to working with you to further develop the current strong Australia-Japan relationship and to achieve a ‘free and open Indo-Pacific,’” said a statement from Japanese Prime Minister Kishida Fumio – another little reminder to Canberra that the only real menace to freedom and openness in the region is Beijing. 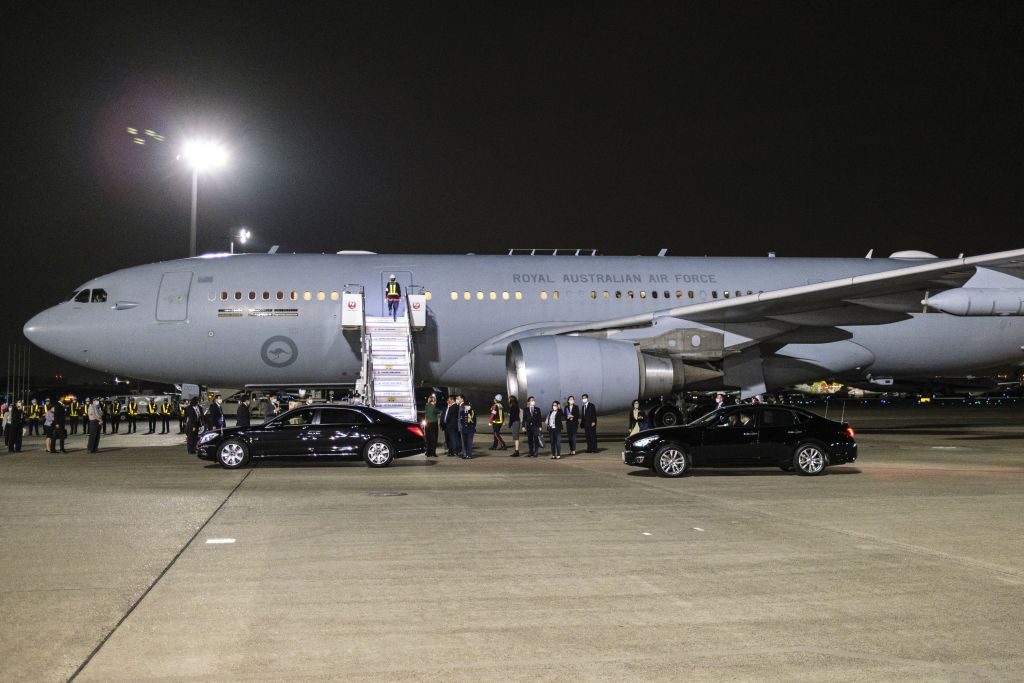 The aircraft carrying Australia’s Prime Minister Anthony Albanese is pictured at Haneda airport in Tokyo on May 23, 2022, for a summit with the U.S., Japanese and Indian leaders, known as the Quad. (CHARLY TRIBALLEAU/AFP via Getty Images)

Hu Xijin, a commentator for the Global Times, China’s state-affiliated media, celebrated Morrison’s “fiasco” on Twitter. The Morrison government “did so many bad things toward China,” Hu added. The “China policy of Labor’s Albanese government probably won’t be much better, but let me first cheer for the defeat of Morrison and his colleagues.”

“If the Labor Party comes to power, at least in terms of people-to-people diplomacy and social exchanges, it will bring some possibility of a recovery in Sino-Australian relations,” Guo Chunmei, a researcher at China Institute of Contemporary International Relations, told the China Youth Daily, in remarks recounted by The Australian newspaper on Friday. Guo’s institute is linked to China’s powerful Ministry of State Security.

While some Western analysts saw too much inertia in relations between Australia and China for Albanese to make sharp and sudden changes, the South China Morning Post (SCMP) recalled on Sunday that Morrison criticized Albanese for “being soft on China” and running as Beijing’s “horse” in the election race.

Albanese responded by denying he was pro-China and accusing Morrison of running an “absurd campaign to try and divide the nation.”

“Both Albanese and Penny Wong have suggested that they should not be provocative and hostile towards China, for which we see a possibility of the new government being rational. In this regard, I hope their rational attitude will be reflected in their new roles,” Shanghai-based professor of Australian studies Chen Hong told the SCMP, echoing the Global Times line about Albanese being more reasonable toward Beijing.

“Our issue is not with the Chinese people…my issue is with the Communist Party of China and their policies…." https://t.co/cUx0NbUNf9

“If Albanese is smart enough, he might try to be less provocative about China, which can help improve ties,” added another Chinese analyst, Guangdong Research Institute for International Strategies professor Zhou Fangyin.

Albanese offered gushing praise for China on the campaign trail, saluting the Communist tyranny for “lifting hundreds of millions out of poverty” in an “economic achievement the likes of which we haven’t seen, ever, in human history.”

In one of his last press conferences before the election, Albanese refused to answer questions about whether he would reach out to Chinese dictator Xi Jinping to improve relations.