Chinese dictator Xi Jinping arrived in Riyadh, Saudi Arabia, on Wednesday for a visit expected to result in nearly $30 billion in trade agreements with the Arab kingdom.

Xi had been rumored to be planning a visit to Saudi Arabia since August, following a disastrous visit to the country by far-left American President Joe Biden that reportedly resulted in the Saudis cutting their oil production, raising prices and reportedly contradicting Biden’s requests to increase oil production and thus lower prices prior to the American midterm elections in November. In addition to Saudi Arabia individually cutting oil production, the oil cartel OPEC+ announced a dramatic decrease in production by 2 million barrels of oil a day in October.

The Biden administration responded to the OPEC+ decision by accusing Saudi Arabia of supporting Russia’s invasion of Ukraine, a bizarre line of attack that offended the Saudi government and resulted in Ukrainian President Volodymyr Zelensky issuing a public statement of support for Saudi Crown Prince Mohammed bin Salman.

Xi – who had not left China since before the Chinese coronavirus pandemic began in 2020 until this September – is reportedly planning to capitalize on crumbling diplomatic relations between the Biden administration and the Saudi royal family to bring the country, and the greater Arab world, deeper into China’s geopolitical influence.

The Saudi Ministry of Foreign Affairs confirmed Xi’s arrival on Wednesday, publishing a video of him landing in Riyadh.

Upon the invitation of the Custodian of the Two Holy Mosques @KingSalman, H.E the President of the People's Republic of China arrives in Riyadh on an official visit to the Kingdom. 🇸🇳

The top order of business for Xi in the country will be attending two conferences, the Riyadh Gulf-China Summit for Cooperation and Development and the Riyadh Arab-China Summit for Cooperation and Development. One summit will bring the Chinese president together with leaders from the Gulf states, while the other event expands the attendees to representatives of the greater Arab world.

Xi will also reportedly engage in meetings centered on trade and diplomacy with Saudi officials specifically, set to result in billions in economic agreements. The Saudi Press Agency (SPA) reported on Tuesday that the country expects to sign $29.26 billion worth of agreements with China, or about 100 billion Saudi riyals.

“Xi’s visit to the Kingdom will run until December 9 during which a Saudi-Chinese summit headed by King Salman and the Chinese president, with the participation of Crown Prince Mohammed bin Salman, will be held,” the Saudi media outlet al-Arabiya reported. “In addition to the deals, China and Saudi Arabia will sign a strategic partnership agreement and a plan to harmonize the Kingdom’s Vision 2030 with China’s Belt and Road Initiative [BRI].”

The Chinese Foreign Ministry finally acknowledged Xi’s travel during its daily press briefing on Wednesday, also noting Xi’s intention to expand the influence of the BRI in the Middle East. 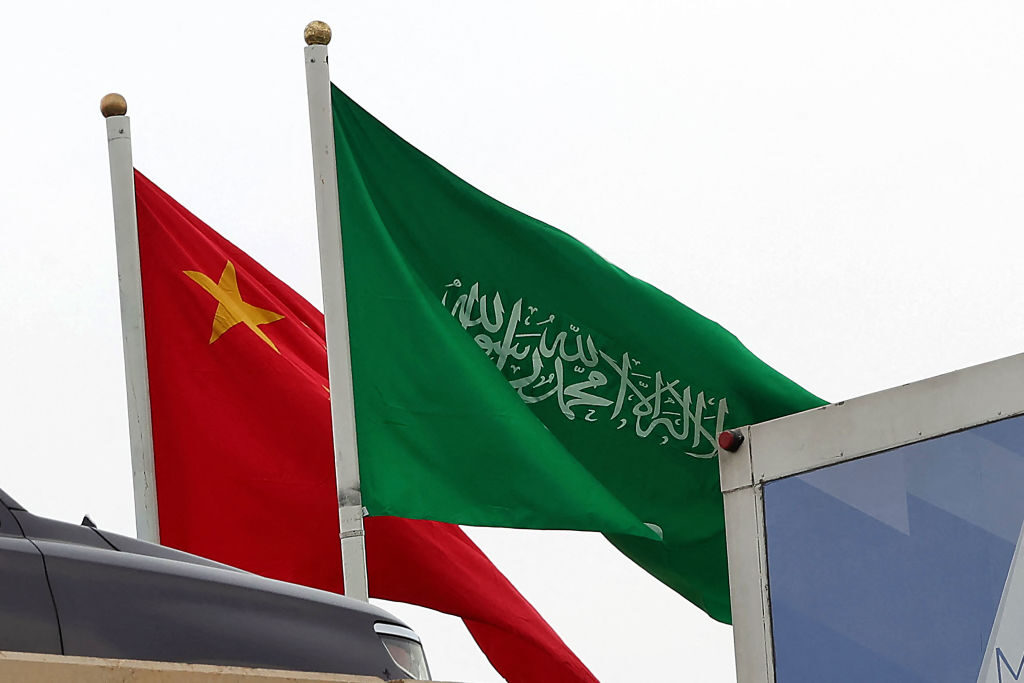 A picture taken on December 7, 2022 in Riyadh, shows the Chinese and the Saudi flags adorning a street ahead of the Chinese president’s visit to the Saudi capital. (FAYEZ NURELDINE/AFP via Getty Images)

“We hope to jointly act on the Global Development Initiative and the Global Security Initiative, advance high-quality Belt and Road cooperation and contribute to the peace and development of the Middle East and the world at large,” spokeswoman Mao Ning proclaimed, referring to two other vague international plans Xi has proposed for the post-pandemic world. “We hope to build a China-Arab community with a shared future in the new era and identify the pathways and practical measures together, in order to promote solidarity among developing countries and contribute to a community with a shared future for humanity.”

Mao called the upcoming summit with Arab nations “the largest and highest-level diplomatic event between China and the Arab world since the founding of the People’s Republic of China.” Mao also boasted that China considers Saudi Arabia to be an ally with “similar visions for development and mutually complimentary development strengths, which makes us natural cooperation partners.”

Neither the Saudi outlets nor the Chinese government specified what kind of deals were expected to be included in those that Xi will reportedly sign with the Saudis. The mention of China’s Belt and Road Initiative suggests that some of the agreements will involve Chinese companies aiding in the development of infrastructure projects.

The BRI is a global plan launched by Xi in which China offers predatory loans to poorer countries to be used to pay Chinese companies to build new transportation infrastructure, often railways connecting major cities or new ports. When the countries involved cannot pay the loans, China uses its newfound leverage to erode the countries’ sovereignty or seize control of the projects. The most prominent victim of the BRI so far is Sri Lanka, which lost control of its Hambantota port to China for nearly 200 years.

The “similar visions” that Mao alluded to between China and Saudi Arabia are most perceptible in their handling of the economy and potential internal dissent. Saudi Crown Prince Mohammed bin Salman has launched two initiatives that appear to be copies of practices Xi adopted at home: a violent purge of anyone within the government that may challenge his rule, under the guise of an “anti-corruption” campaign, and “Vision 2030,” a plan to diversify the Saudi economy away from depending solely on oil that requires major infrastructure developments similar to BRI projects. Bin Salman adopted Vision 2030 after Xi Jinping visited the country in 2016, calling for the world to accept “the Chinese vision for the Middle East.”

The growing proximity between the two nations has required one major oversight on the part of Saudi Arabia: the fact that China is currently engaging in genocide against Muslim communities in occupied East Turkistan. The Communist Party launched a campaign to imprison, sterilize, torture, rape, and enslave people belonging to the indigenous Uyghur, Kazakh, and Kyrgyz communities of that region in 2017, building what is considered the world’s most sophisticated concentration camp system in use today. The Saudi government, custodians of the holiest sites in Islam, have not only failed to condemn the genocide but arrested individuals in the country who dared express public opposition to the genocide of Muslims.

In describing the visit on Wednesday, the Chinese regime’s Global Times newspaper suggested that the Saudis and other regional states were interested in “China’s experience” with “political turmoil,” most clearly defined by the 1989 Tiananmen Square massacre, believed to have resulted in the deaths of as many as 10,000 peaceful protesters.

“Avoiding political turmoil while achieving stable economic growth has become a common desire of many Arab countries,” the Global Times claimed. “They are keenly interested in China’s experience, which China is willing to share with its Arab partners without reservation.”

“Unlike some powers that have entered the Middle East with a superior posture and focused on geopolitical and security issues, China shares the hardships of the Arab countries in the struggle for national liberation,” the outlet concluded.