The vast majority of the population of Pakistan – about 220 million of 240 million people – was left without electricity on Monday after a “widespread breakdown in the power system,” according to the Ministry of Energy.

Pakistan is one of the world’s most densely populated countries and boasts a stable of six operable nuclear reactors in addition to a power grid largely supplied by coal and other fossil fuels. It experiences routine regional blackouts, particularly in more remote regions, but Monday’s total collapse presents a new level of severity in infrastructure malfunction.

The blackout, which persisted in much of the country at press time on Tuesday, poses a new challenge for establishment Prime Minister Shehbaz Sharif, who took over after the ouster of popular radical Islamist Prime Minister Imran Khan. Khan, a proponent of global blasphemy laws who has publicly praised Osama bin Laden as a martyr, remains popular in Pakistan and is currently on a nationwide tour demanding new elections that could potentially restore him to power. Khan survived an assassination attempt in November but was back on tour giving anti-Sharif speeches, in a wheelchair, the next day.

According to Pakistan’s Energy Ministry, a “widespread breakdown” caused by unknown circumstances occurred at 7:34 a.m. local time on Monday.

“There was a fluctuation in voltage and the systems were shut down one by one,” Energy Minister Khurram Dastagir said on Monday. In an interview with the South Asian outlet Geo News, Dastagir insisted that the malfunction was not “major,” but resulted in a catastrophic blackout because, in the winter months, Islamabad shuts down much of its energy capacity due to lack of demand.

“In winter, the demand for electricity reduces nationwide, hence, as an economic measure, we temporarily close down our power generation systems at night,” Dastgir said. “However, when the systems were turned on in the morning today, frequency variation and voltage fluctuation was observed in the south of the country […] somewhere between Dadu and Jamshoro […] because of which power generating units shut down one by one.”

“I can assure you that power will be fully restored across the country within the next 12 hours,” Dastgir said on Monday. He later claimed that, while electricity would flow, the government would have to ration it until all systems returned to full capacity, which could take up to three days.

“In the coming 48 hours, a shortfall will continue,” he said at a press conference on Tuesday morning.

Watch: #Pakistan’s energy ministry says it has restored its national #power grid nearly 24 hours after a breakdown triggered the worst outage in months, highlighting the frailty of the aid-dependant nation’s infrastructure.https://t.co/JaFJBK2ytk pic.twitter.com/TxcLQKUggk

“January nights have the lowest electricity demand in a year,” he explained. “When we ramp down the system with the decreasing demand, we turn several power plants off.”

As of Tuesday afternoon local time, Pakistan’s largest cities still did not have power. The Pakistani newspaper Dawn reported that Karachi, Quetta, and Lahore all did not have reliable electricity as of Tuesday. The publication cited Dastgir stating that “approximately 6,600 megawatts of coal and 3,500MW of nuclear plants would take an estimated 48 to 72 hours to restart.”

The blackout has reportedly had a devastating effect on Pakistan’s economy, as it caused malfunctions in other infrastructure. Half of the nation’s telecommunications towers, for example, failed on Monday, taking out internet and telephone communication. The nation’s train services were paralyzed. In Lahore, residents woke up to find they had no water, as the Water and Sanitation Agency (WASA) could not operate the systems that provide it to homes.

Leaders of Pakistan’s pivotal textile industry said on Monday that they had lost upwards of $70 million in profits as a result of the blackout. The head of the All Pakistan Textile Mills Association, Shahid Sattar, told Dawn that 90 percent of textile factories were forced to shut down, and they could not be immediately restarted without some warmup time that would also cut into production.

“We can’t pick up from where we stopped. All that thread that’s in the middle of being dyed and treated, et cetera, cannot be used again. So we face massive losses that way,” Sattar explained.

The Karachi Chamber of Commerce and Industry estimated that the country had lost 100 billion Pakistani rupees, or about $432 million, to the blackout on Monday. 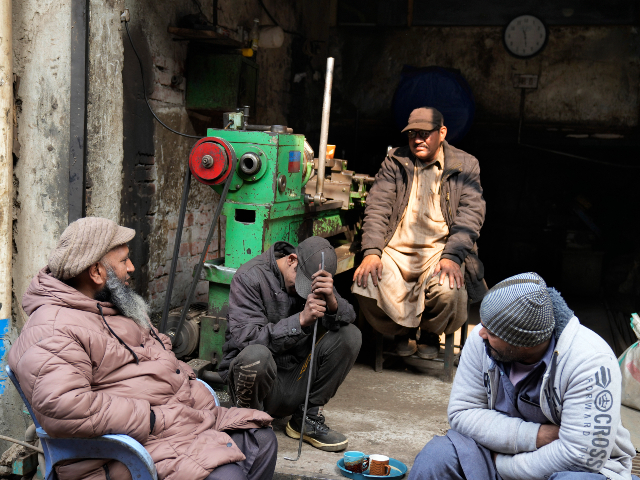 Workers wait for electricity outside their workshop following a power breakdown across the country, in Lahore, Pakistan, Monday, Jan. 23, 2023. Much of Pakistan was left without power for several hours on Monday morning as an energy-saving measure by the government backfired. The outage spread panic and raised questions about the cash-strapped government’s handling of the crisis. (AP Photo/K.M. Chaudary)

The Sharif government has not provided any detailed explanation for the blackout as of Tuesday morning. Dastgir, the energy minister, reportedly blamed Khan’s government for not doing enough to maintain the power grid, allowing the system to deteriorate. He also reportedly suggested “foreign intervention such as hacking of systems” could have potentially caused the power grid failure, but he did not blame any specific state or non-state actor for the potential hacking and offered no other specifics about the possibility of sabotage.

Shehbaz Sharif expressed outrage at the situation on Monday, announcing he would organize an investigative committee to unveil the causes of the blackout and prevent repeat incidents in the future.

“I have served thrice as chief minister of Punjab and now serving as an incumbent prime minister of the country, what legacy we will leave behind if these issues are not being addressed?” he asked in remarks during a youth business event in the nation’s capital on Tuesday. “It is clear that Pakistan is facing huge challenges, and if we have taken responsibility, we will make our last-ditch efforts to steer the country out of the difficulties.”

The political climate for Sharif was extremely contentious even before the blackout thanks to the challenge from Imran Khan and his radical Islamist Pakistan Tehreek-e-Insaf (PTI) party. Khan has not issued any public statements regarding the power grid failure as of Tuesday, instead focusing on challenging the appointment of a regional official in Punjab who he described as “corrupt” and “an enemy of PTI.”

Khan was reportedly in Lahore on Tuesday, at a rally apparently attended by thousands of people despite the electricity woes.

Lahore rejects this corrupt caretaker CM, a virulent PTI hater & one of the players with ex-COAS, the main architect of regime change conspiracy. His appointment negates the very concept of neutral caretakers. Today there is a complete mockery of justice, ethics & morality in Pak pic.twitter.com/58Tuhy1RXa

“The first protest will be held in Lahore on Tuesday (today), followed by one in Multan on Wednesday, Faisalabad on Thursday and then on every day in other cities,” Khan promised.