HOUSTON, Texas — In a continuing cover-up by Child Protective Services (“CPS’) in Texas, Judge Keith Dean this week ordered the removal of a YouTube video produced by a 13-year-old boy that exposes the sexual and physical abuse that he and his brother endured while in CPS foster care. The video also reveals the 377-day nightmare suffered by him and his six siblings after they were ripped from their loving family and placed in four different foster care facilities out of county. The mother told Breitbart Texas “they are trying to rake this abuse under the rug.” Breitbart Texas has procured the YouTube video from a source outside the family.

The YouTube video shows the young teenage boy holding homemade signs that convey the story of what CPS caseworkers, and the CPS foster care system, has done to his family. One sign says “I was beatened [sic] and sexually assaulted on a day to day basis while my Social Worker did Nothing.” He holds another sign saying “My abuse goes uninvestigated.”

Breitbart Texas talked to the mother Angel Linthicum Cook in early July and reported about the atrocities suffered by this family. Cook and two of her sons had just testified at a Texas Sunset Advisory Commission hearing. The Commission was meeting to hear testimony about TDFPS (Texas Department of Family and Protective Services, “CPS”) abuses and other problems.

Legislators on the Commission were shocked by the Cooks’ testimony and promised to address the abuses by CPS and CPS caseworkers. Rep. Harold V. Dutton, Jr., said it was the worst thing he has heard or seen in state government during his 30 years as a State Representative. He said during the hearing that he had “never heard a story so bad, so egregious, that it just almost incites a rage in me. This is government at its worse.”

Cook and her sons testified again in late July but she says the CPS abuses remain uninvestigated. She told the Commission that she was testifying to expose illegal and unethical abuses by CPS caseworkers in withholding evidence, lying under oath, and falsifying documents.

There was a hearing this week in the CPS custody case. The judge assigned to the case, Judge Keith Dean of Dallas County, ordered Mrs. Cook to take down the YouTube video. He made her take it down while she was standing in the courtroom. Cook told Breitbart Texas that the CPS worker and the ad litem had angrily discussed the video while in the hallway but were very careful about was said on the court record. The Judge had signed an order whereby she could be held in contempt if she did not remove it. Breitbart Texas has obtained a copy of the Judge’s Order. 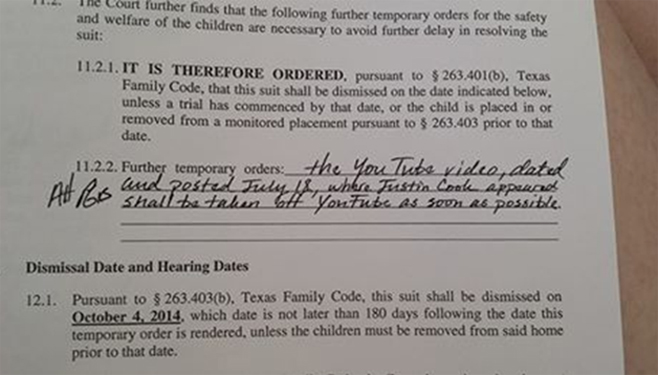 Mrs. Cook testified during the last hearing at the Texas Sunset Commission that her son was beaten, held down, and sexually abused while in foster care. Photos of her son’s injuries appear on her Facebook page.  She also testified that her seven-year-old son cries when someone knocks on the door, and he and her four-year-old cry if she is out of their sight. They beg her not to take them to daycare. The Judge ordered the Cooks to put their two youngest children in daycare saying they had too many children to take care of.

The trouble with CPS started when their youngest son Buddy, died in March 2013 because he had HIV. The Cooks had adopted Buddy and his younger sister after their biological mother left the children with the Cooks. She was hiding from CPS from two different states. Photos on Mrs. Cook’s Facebook page show the scars, bruises, and cuts on the boy when he was left with them. It was the Cooks that notified CPS that the mother had left the children in their care.

CPS took the Cooks’ seven children on the same day that Buddy died. Mrs. Cook has told authorities, members of the Sunset Commission, Breitbart Texas, and others that the CPS caseworker lied and withheld evidence about Buddy’s HIV status and the biological mother’s CPS history from law enforcement and the Coroner. Mr. and Mrs. Cook were arrested for Injury to a Child by Omission. Although the charges were dropped in December of 2013, CPS kept the children for four more months. The agency still will not relinquish legal custody.

Under Texas law, CPS and the Judge have until October to terminate the Cooks’ parental rights or the case must be dismissed. Even though the children are back in the Cooks’ care after they have been exonerated from any wrongdoing, CPS still has legal custody of the children. CPS is expected to dismiss its case against the Cooks in October. The Cooks have spent over $140,000.00 defending themselves and protecting their family from CPS.

Jim Black, a CPS watchdog from Humble, Texas, said that “anytime a TDFPS employee fails to follow the guidelines, statutes, and rules set forth by the State, they are actually insubordinate to their employer, the people of Texas. When it comes to statutes, in many cases that insubordination results in down-right criminal behavior. Moreover, what we have is the fox guarding the henhouse. Texas needs another entity in charge of CPS internal investigations. Right now it is the Office of the Inspector General of the same agency.”

Lana Shadwick is a 22-year lawyer who has been a family court associate judge, CPS lawyer, and prosecutor.  Follow her @LanaShadwick2