DALLAS, Texas — On Tuesday Reverend Jesse Jackson held a candlelight vigil in Dallas for  Thomas Eric Duncan, the Liberian man who was recently diagnosed with Ebola. During the event, Jackson admitted that he thinks the Ebola “crisis” is going to get worse due to frequent travel from West African countries afflicted by the virus.

“This crisis is going to get bigger because of the traffic to Guinea,” Jackson said.

The reverend, however, did not bring up a travel ban from affected countries as a possible solution to the issue.

The vigil was held outside of Texas Presbyterian Hospital, where Duncan is being treated, and was heavily attended by medical staff. Jackson was joined by Duncan’s mother and nephew. 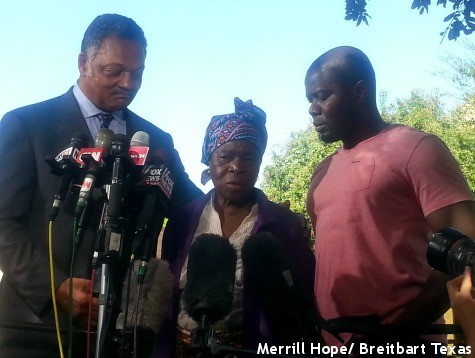 Several times, Jackson appeared to politicize the situation by discussing the role insurance may have played in Duncan’s situation. He asserted that Duncan was probably sent home from the ER the first time he went because “he didn’t have insurance.” Duncan was treated like a “Medicaid patient,” in Jackson’s view.

Jackson told local media outlet Fox DFW, “Thomas deserves the love and the best medical treatment American can afford as has happened for all the other Americans who have contracted this terrible disease. He must be treated as a patient with all the human rights deserved, not as a criminal.”

Jackson additionally insisted that Duncan had no idea he could be sick when he came to the United States.

“[Duncan] had a great reputation in Liberia,” Jackson said. “He assisted a woman who died. He came home to marry the mother of his son and got sick.”

Indeed, Duncan had assisted a woman dying from Ebola in Liberia days prior to boarding a flight to the United States. While helping the woman, he reportedly had direct contact with her. It is unclear  what caused Jackson to believe that Duncan did not know he could be infected with the virus after contact with that woman.

Jackson went on to say that Duncan should not be criminalized for having Ebola. At this time, the Liberian government has said it may prosecute Duncan for lying about previous contact with patients infected with the virus. According to Liberian officials, Duncan knew he had been exposed to Ebola and lied on his travel forms. Duncan’s former boss additionally said in interviews  that Duncan “knew he had Ebola” and that his trip to the U.S. was a desperate attempt to stay alive.