HOUSTON, Texas — A report obtained by Breitbart Texas from the Houston Independent School District (HISD) revealed the influx of unaccompanied minors over the summer from Central America lead to an increased enrollment of 3,000 students. The total student population for HISD is over 215,000 which represents the largest total enrollment for HISD since the 1970’s.

The total immigrant population for HISD currently sits at 8,409 students according to a memo written by HISD’s Government Relations Director Ashlea Graves. The memo was received by Breitbart Texas from a government source wishing to remain anonymous. Graves confirmed the authenticity of the memo in a phone conversation with Breitbart Texas.

Honduras, Mexico and El Salvador lead the list of 43 nations from around the globe with immigrant students enrolled in HISD. This immigrant enrollment includes legal and illegal immigrants and includes the 3,000 unaccompanied minors listed above according to Graves.

The charts shown below summarize HISD immigrant data as of an October 31, 2014, snapshot. For the purposes of this data chart, immigrant students are only considered during their first three years of enrollment of the district.

The unaccompanied minors enrolling in HISD this fall represents an increase of over 1,000 students per month. No estimated costs for educating these students were reflected in the report. However, in August, Breitbart Texas’ Kristin Tate reported Texas taxpayers would be on the hook for an estimated $45 million in education costs for the unaccompanied minors. That number was based upon an estimated 4,800 foreign minors that were reportedly set free in Texas. Texas Education Agency (TEA) General Counsel David Anderson estimated the cost per student at about $9,500 per student because of the need for bilingual special education teachers.

Using the number provided by the TEA, the estimated cost to HISD taxpayers would be over $28 million for the 3,000 unaccompanied minors now enrolled in the district.

The memo states that while Mexican students have not been the focus of media attention recently, their enrollment accounts for the second largest source of immigrant students with 1,261 students. Their enrollment is mostly in the secondary level schools. Honduras leads the list of immigrant students with 1,385. El Salvador trails Mexico with 1,227 students. Rounding out the top five countries are Guatemala with 402 and India with 347.

The students are spread throughout the district but the report below shows most of the immigrants are enrolled in the Southwest area of the school district with a few schools in the Southeast and some in the North. 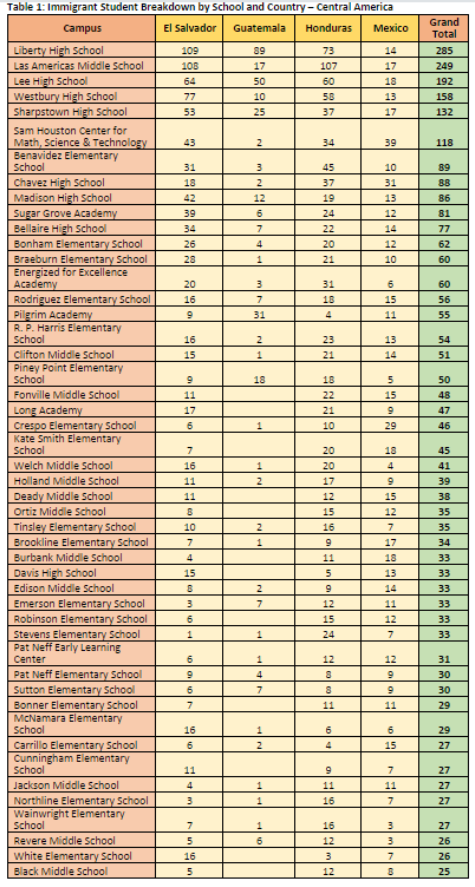 Ashlea Graves told Breitbart Texas the numbers were compiled by Dr. Gracie Guerrero, HISD’s Assistant Superintendent for Multilingual Programs and was sent out to local, state and federal elected officials to update public officials on HISD’s response to the influx of unaccompanied minors.