HOUSTON, Texas – An Islamic professor from the University of Houston Political Science Department is reported to have sent an official email to students from his university email account containing what claimed to be a “draft of a letter” from Senator Tom Cotton (R-AR). The cartoonish “letter,” clearly fake, gives the appearance of being handwritten by a highly uneducated person.

Cyrus A. Contractor is an Instructional Assistant Professor in the University of Houston political science department. Breitbart Texas received a copy of the email message (attached below) allegedly sent to students by Professor Contractor. The message was supposed to help prepare students for an upcoming examination. Under Item 5 in this email, it says, “I’ve just very recently come across a rough draft of Senator Cotton’s letter to the leaders of the Islamic Republic of Iran. I believe it can be useful for our understanding of what is really happening here. Please find it attached.” The supposed “draft” is pictured above.

The email closes by saying, “Please contact me with any questions, comments, or concerns.” Breitbart Texas did just that. This writer attempted to contact the professor via email and telephone. An attempt was also made to contact Professor Susan Scarrow who serves as the political science department chair, and U of H president, Professor Renu Khator. No response has been received at the time of this article being published.

During his class, the professor allegedly told his students the forty-seven senators committed an act of treason, according to the student in a phone conversation with Breitbart Texas. The student said they normally find this professor to be non-partisan in nature and that he does not seem to normally prone to pushing an agenda. The student said this was an isolated incident of going over the top. 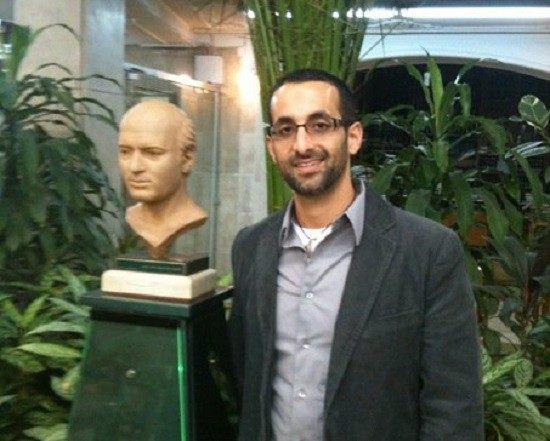 Professor Contractor’s university bio says he is an assistant professor in the Department of Political Science where he teaches two political science classes and a class on U.S. and Texas constitutional politics. His research interests include the “politics of the Middle East, particularly the Islamic Republic of Iran, as well as the congruence of state and society.” He lists his current research project as stemming from his dissertation that focused on the “political dispositions of Shi’a Muslims in the United States, particularly the effect of religious narrative on political and social life.”

Senator Tom Cotton, a freshman Republican from Arkansas, led the movement with Republican lawmakers who sent a letter to the leaders of Iran warning against entering into a nuclear agreement with the Obama Administration. Senator Cotton is a graduate of Harvard University and Harvard Law School and is a distinguished veteran who served as an infantry officer in the 101st Airborne Division in Iraq during 2006 which was one of the bloodiest periods of that war, according to an article in the New York Times by Jennifer Steinhauer. Cotton’s background is clearly at odds with the uneducated person that Contractor is trying to make the Republican Senator out to be.

At Harvard College, Mr. Cotton wrote a 92-page senior thesis on the Federalist Papers and later served as a clerk with the United States Court of Appeals before joining a private law practice in Washington.

After the terrorist attacks of Sept. 11, 2001, Mr. Cotton joined the Army and spent almost five years on active duty, including as a platoon leader on combat patrols in Baghdad.

While it appears Professor Contractor may have also “missed the point,” it also appears he may have inappropriately used the university’s email system to carry out his own personal partisan-propaganda mission against Republican politicians.

While read receipts have been received from the professor and the U of H president indicating the information request from Breitbart Texas was displayed on their computers, no response has been received. If a response is given by the university or the professor, this article will be updated accordingly.