LAREDO, Texas — A large security detail and a last minute change of venue by city officials in this border city made it difficult for 2016 Republican presidential candidate Donald Trump to visit the actual Texas-Mexico border. Trump intended to get a first-hand look at how porous this sector of the border actually is.

Instead, Laredo city officials took Trump to a highly secure facility at one of the international bridges used primarily for commercial vehicle entry into the U.S. Trump met with multiple law enforcement officials and spoke with Customs and Border Protection (CBP) agents about the realities of the border. However, during the press event at the bridge, Laredo city officials tried to steer the conversation towards the large amount of legal international commercial traffic through the area. 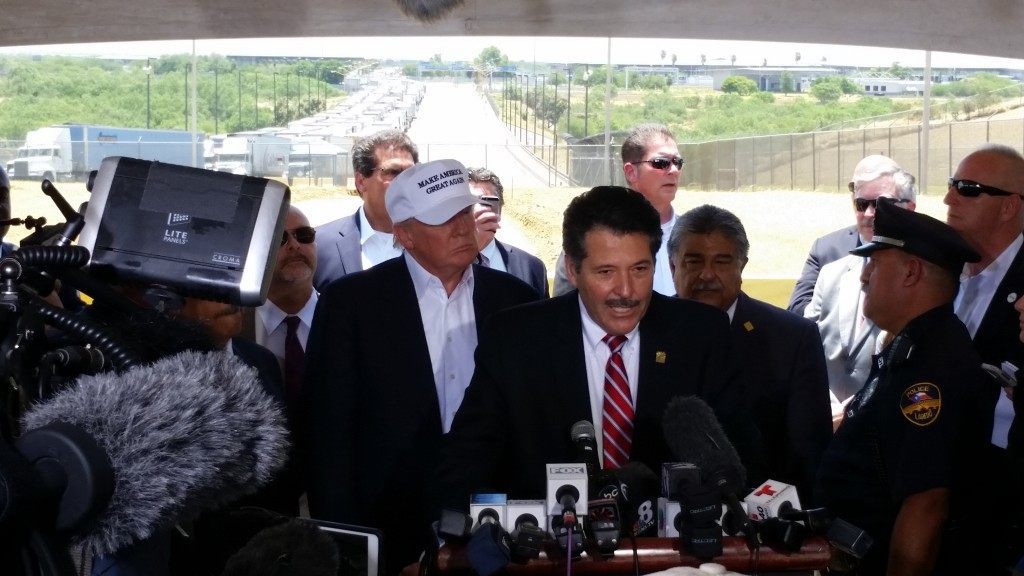 Originally, Trump had been invited by the local chapter of the National Border Patrol Council to visit the border and learn firsthand from the agents about the realities on the border. However after the NBPC pulled out from the event, the City of Laredo took over changing the location of one of the events.

From his arrival at the airport Trump was supposed to visit a plaza next to the Juarez Lincoln International Bridge where he would have seen an area that has been reported on by Breitbart Texas for being a widely used corridor that allows human smugglers to quickly make their human cargo blend in with the people walking around in downtown Laredo.

In preparation for an expected artificial increase in security prior to Trump’s visit so as to make it seem like the porous border is widely patrolled, Breitbart Texas videotaped various weak spots along the border that were not being patrolled.

However Trump did not get to visit those areas because city officials moved him from the airport to the World Trade Center International Bridge where Trump took some questions from the media, but city officials tried to keep the conversation geared towards the bustling international commerce in the area.

While Trump was able to hear from multiple law enforcement officials about the dangers of an open border and the vulnerabilities in Laredo, the schedule changes did not allow the presidential candidate to have a first-hand look at the open border.

Instead of an open unsecured border, Trump saw high fences and dozens of police officers making it difficult for the candidate to see the multiple areas along the Rio Grande that Breitbart Texas has reported on in the past.

Trump was also not able to tour the various storm drains that lead to the river and as reported in the past by Breitbart Texas have been used by drug and human smugglers to avoid capture by authorities.