LAREDO, Texas — A Hispanic Texan who is a life-long Democrat and lives in the border town of Laredo came out to the airport to give Donald Trump a message. Draped in an American flag, he told Breitbart Texas he is ready for something different and would vote for Trump in the 2016 Texas Republican Primary.

“I’m sick of this administration, I’m ready for something better, I was raised a Democrat but this administration makes me want to throw up,” said Joseph Diaz, a 50-year-old high school art teacher, just before he watched 2016 presidential candidate Donald Trump take off from a Laredo, Texas, airstrip.

Trump’s departure closed out his 3-hour trip to the Laredo border region on Thursday. Admirer Diaz shared with Breitbart Texas his appreciation for the Donald saying “I like the way he speaks.” 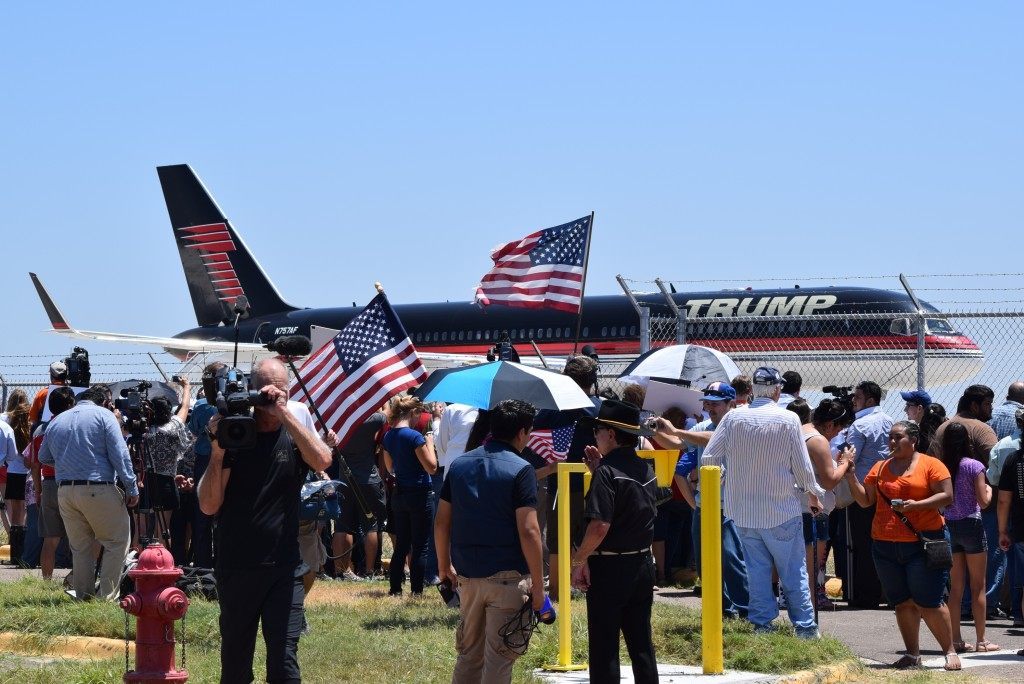 Crowd gathers to greet Trump in Laredo. Some to support, some to protest. (Photo: Breitbart Texas/Bob Price)

“I think that it’s great we’ve got someone speaking out on the issues,” Diaz said, “I don’t know if he’ll make a great president but he’s real interesting to watch.”

“Something needs to happen, this border is so porous and so not secure its amazing we haven’t had a major terrorist attack.” He repeated that sentiment later.

Referring to Trump he said, “If that’s our hope then I’ll vote for him.”

As a high school teacher who grew up in Laredo, Diaz said, “I have a lot of non-resident U.S. citizens. You have a lot of horror stories coming out of Nuevo Laredo.”

He also explained that as a man with both Hispanic and Anglo grandparents he felt prejudice from kids from both backgrounds. Growing up in Laredo, he said, “People would get mad at me growing up for not speaking Spanish.”

Diaz said despite his Democrat upbringing, he would “vote for anybody who is going to make this country better.”