HOUSTON, Texas – Eight people were found dead inside a home in north Houston Saturday night. Police officers entered the home after receiving a call asking them to perform a welfare check on the residents. Harris County Sheriff’s Office (HCSO) deputies entered the home after seeing a dead child lying on the floor when looking through the windows of the home.

UPDATE: During a press conference held at the Harris County Sheriff’s Office, Chief Deputy Tim Cannon stated that the deceased victims were counted as six children and two adults. The victims ranged in age from six to fifty. Two of the victims were female and six were male. The deceased family members were identified as: Valerie Jackson, 40; her husband Duane Jackson, 50; and their six children – Nathaniel, Honesty, Duane, Jr., Caleb, Trinity and Jonna. (Spelling of names were not given at this time.) Initial reports stated there were five children and three adults killed.

During the press conference, it was revealed that there were three calls for a welfare check, possibly including one call reporting a man with a gun. Cannon responded that the deputies did not have enough information to make entry into the home until the discovery of the first child’s body. Cannon called the killings a senseless tragedy.

No one answered the door when deputies arrived at the house, HCSO spokesman Thomas Gilliand told KHOU reporters on the scene. Deputies learned that one of the residents, David Conley, aged 49, had a warrant out for his arrest (see document attached below).

David Ray Conley, III, who has a lengthy criminal record that included several cases of domestic violence, a search of court records by Breitbart Texas revealed. That record includes felony and misdemeanor charges of assault on a family member, a felony charge of retaliation, felony possession of crack cocaine, felony robbery charges, evading arrest, criminal trespass, and felony auto theft. His criminal record in Harris County dates back to 1988. He has been seen before judges in at least six different misdemeanor and felony courts in Houston.

The warrant for his arrest was issued on July 8, court records revealed. He was charged with felony family assault and listed as a 2-time offender. He allegedly injured his girlfriend, Valerie Jackson by pushing her “head into a refrigerator with his hand.” His address for this offense is listed as 2211 Falling Oaks Road in Houston. This is the address where the mass murders took place.

Deputies began looking in windows of the home and discovered the body of the child laying on the floor.

Gilliand said the HCSO sergeant on the scene called for the county’s High Risk Operations Unit (HRO) to make entry and investigate. The HRO unit functions similarly to a SWAT team. However, after deputies discovered the child’s body, three deputies on the scene made entry.

Conley allegedly opened fire on the deputies who quickly retreated and awaited the arrival of the HRO team. Following a one-hour standoff where deputies were communicating with Conley, he agreed to surrender and came out of the home. He was taken into custody without further incident. 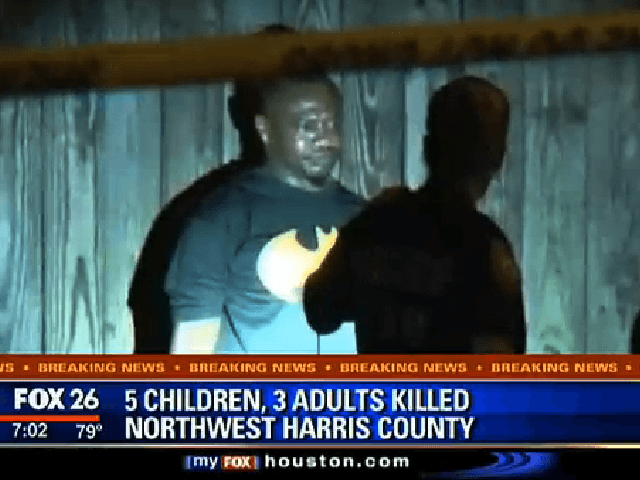 Once safely inside the home, deputies discovered the bodies of five children and three adults.

“At this time we have what appears to be five children and three adults,” Gilliland told reporters on the scene of the mass murder. “Ages and genders we do not have, and cause of death we do not have. The medical examiner will have to determine a cause of death.”

At this point it is not known what the relationship is between Conley and the victims. No motive has been released at this time.

“Homicide detectives have taken over the operation along with our crime scene unit. Due to the amount of victims and the proximity to the people in the house, it’ll be a scene that’s going on for a while,” Gilliland told the reporters.

The HCSO plans a press conference for 3 p.m. Central Daylight Time to release more information. This case has been assigned to Judge Vanessa Velasquez  in the 183rd Criminal District Court.

Just over one year ago, Breitbart Texas reported a similar case in Houston where four children and two adults were killed by an estranged family member. In that case, Ronald Lee Haskell was also charged with Capital Murder (Multi Murder) according to Harris County court records. He remains in custody in the Harris County jail pending trial.