Record-high beef prices have turned cattle rustling into big business once again in Texas. After five years of drought, beef prices are high, herds are small, and independent businessmen are cutting locks and hauling away the ranchers’ profits in cattle trailers.

The law calls them rustlers, and the Special Rangers from the Texas and Southwestern Cattle Raisers Association (TSCRA) track more than 400 cases of stolen cattle so far in 2015.

The Rangers cover 76 million acres across Texas and Oklahoma. They handle stolen cattle, horses and even ranch equipment. The 5,800 livestock reported stolen in Texas during 2014 was the most in five years, and the value of the animals — in excess of $5.7 million — the most in a decade. 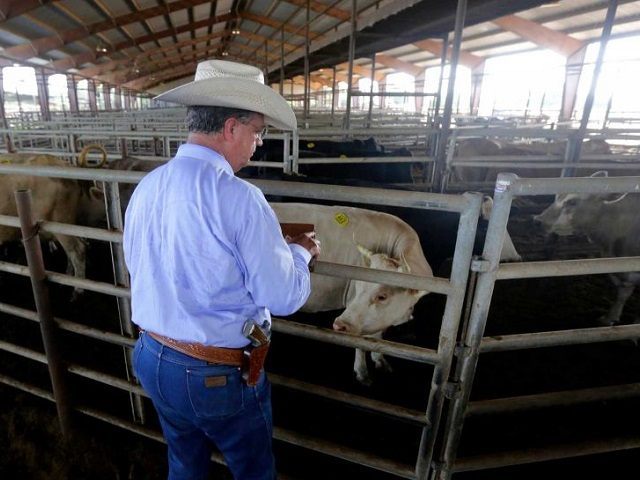 Doug Hutchinson handles nine counties around San Antonio, according to a San Antonio Express-News article. On this morning, he leaves his house dressed in boots, jeans, and his Stetson. He wears a Special Ranger badge on his shirt, a .45 on his belt, and his most critical piece of equipment: his smartphone.

He uses it multiple times each day as he photographs brands and compares them to the associations database. The database is coupled with reports of stolen cattle. He also checks in with Sheriffs offices statewide.

Cattle average close to $1,000 per head, and at the beginning of this year, nearly 90 million head of cattle and calves roamed the U.S. This is the fewest in some six decades. Texas, following years of drought, hosted just under 12 million. This nearly doubles the next largest beef-producing states of Nebraska and Kansas.

But Doug Hutchison stays on the track, working through auctions across his assigned area, smartphone in hand. “We can check statewide,” he said in an interview with the Express-News. “But characteristically, a lot of (offenders) don’t travel more than 100 miles. Those thieves are too lazy to work.”

Three animals attracted his attention recently at an auction in Giddings, midway between Houston and Austin. The seller wasn’t local, and one of the cows was pregnant. “That’s very unusual,” Hutchison said.

What’s also unusual is that they carried no brands or ear notches, and that can make all the difference in recovering the cattle. Texas, unlike other states, requires no brand on cattle.

In one case last month, a Texas man was charged with theft after 544 steers worth nearly $800,000 went missing.

Hutchison continues to take pictures, walking through the usual terrain of a cattle auction, and says a lot of rustling is related to illegal drug use. Kansas and Nebraska investigators said the same.

“Because the price is so high, some of these think: ‘If I can get four or five head, I can stay high for a long time,'” he said.

And rustling almost always involves people with an agriculture background.

“There’s not a facet of the cattle business I don’t know,” said Carl Curry, 48, a Texas A&M University animal science graduate who has 119 years left in prison. Prosecutors said he stole more than 2,000 cattle since 2007; Curry insists he’ll be vindicated on appeal.

A note of history there: A horse thief became the first person sent to the Texas State Penitentiary in 1849 during its construction. His name and sentence have been lost to time. But the crime, and arresting rustlers, is nothing new.

Some rustling cases end well. According to the Cattlemen’s Association, marked or branded cattle have about an 80-85 percent chance of recovery, while unbranded animals go way, way down, maybe 35-40 percent.

Other cases result in apprehension of the rustler, as in this news release from the TSCRA: Freestone County theft suspect surrenders:

Sharon Nehring, also known as Sharon Jacoby, 57, of Freestone County, surrendered to authorities Tuesday and was charged with felony theft of livestock. TSCRA Special Ranger Jimmy Dickson and other law enforcement authorities searched for Nehring for several months after an investigation alleged Nehring had purchased thousands of dollars worth of lambs and goats with a worthless check from the Freestone County Fair in June 2014.

Nehring surrendered and was arrested on a $5,000 bond. TSCRA received many calls from concerned citizens and to Operation Cow Thief, an anonymous tipline that offers a cash reward for information leading to the arrest and/or grand jury indictment of thieves.

“The response from concerned citizens was tremendous and eventually led to the suspect surrendering and posting bond,” said Dickson. “I’m pleased TSCRA Operation Cattle Thief was able to help in this investigation and I greatly appreciate Freestone County Detective Clayton Aldrich and Freestone County District Attorney Chris Martin for their assistance in the arrest of the suspect. This case will now move forward to the criminal justice system.”

The current TSCRA website lists more than 40 crimes being investigated since April, from a single newborn colt missing to trailers, four-wheelers, and as many as 30 head of cattle in Bastrop County.

Meanwhile, the TSCRA theft hotline gets calls at 1-888-230-3333 looking for tips and clues to lead their Rangers to stolen livestock and ranch equipment.