Middle school children playing football and soccer in Laredo, Texas, and their parents are being subjected to gangs of cartel drug smugglers running through their practice fields with bails of marijuana on their backs. It is such a regular occurrence that one Laredo City Council member is speaking out for more enforcement and resources.

George Altgelt, a Laredo attorney and city council member for District 7, recently sent letters to the Laredo North Border Patrol Sector chief and the Laredo city manager asking for help for the parents of his district. In addition to the park where these children play, District 7 includes the 2nd busiest port of entry in the United States and a major international cargo bridge, the council member told Breitbart Texas in an interview on Thursday. Altgelt also assists the National Border Patrol Council Local 2455 as an attorney.

“Father McNaboe Park is a very family-oriented park,” Altgelt said to Breitbart Texas on Thursday. “We have a lot of middle school children who come here to practice soccer and football. In the middle of all of this, suddenly, gangs of cartel drug smugglers will come up from the river, run through the fields where the children are playing, and drop their load of marijuana with drivers who are waiting with getaway vehicles to haul off the drugs.” 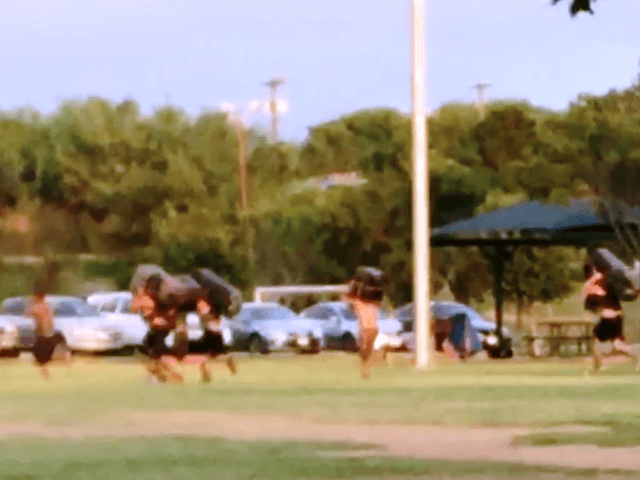 Photo of smugglers running across the park’s fields with marijuana bundles on their backs. (Photo taken by an anonymous middle school student who was so upset with the actions, the student took the parent’s phone and shot the pictures.)

“The gang of drug mules then jump back in the river and swim back to Mexico,” he said. “People are bewildered about how brazen they are to do this right in front of everybody.”

He said this park is very active after school and on the weekends and is always full of families and children. 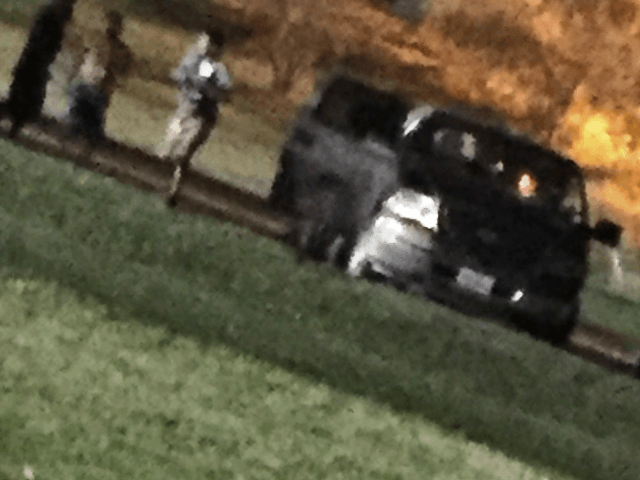 McNaboe park is located right on the Rio Grande River that separates the Los Zetas cartel controlled drug trafficking center near Nuevo Laredo from its sister city, Laredo. The banks of the rivers are covered with an invasive cane plant that is not indigenous to the area and makes it difficult for Border Patrol to see smugglers who have come across.

“The smugglers come up a trail the city has cut down to the river for launching canoes and kayaks,” Altgelt explained. It makes it easy for them to charge in with their loads when their scouts tell them the coast is clear.” 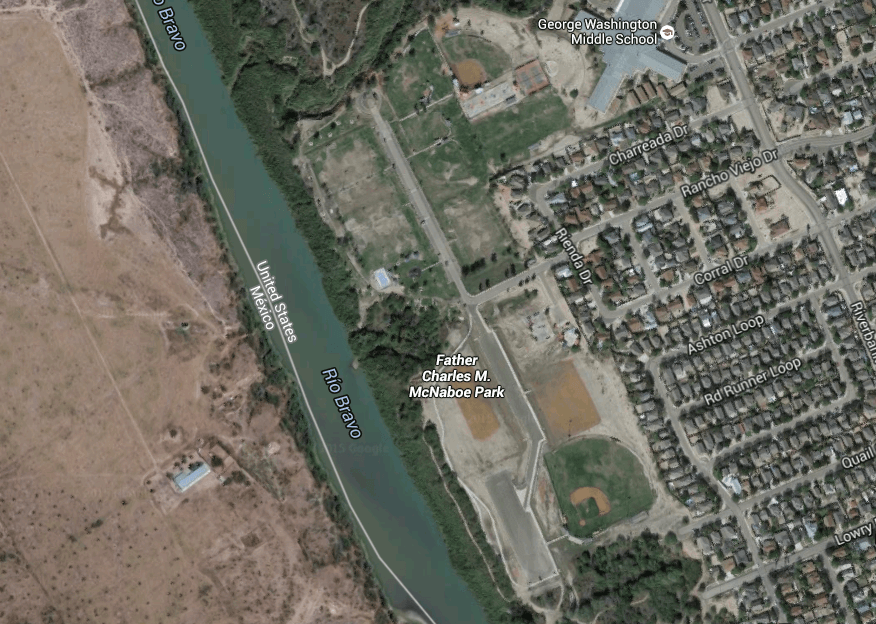 One of the football coaches told Altgelt that when he sees the smugglers running across the football fields wearing wet shorts and having large bundles strapped to their backs, he calls his players into a huddle so they children don’t panic.

Altgelt told Breitbart Texas there is a severe lack of law enforcement resources in his district. The Border Patrol is under staffed, and there is only one Laredo police officer assigned to regularly patrol his district which includes the border area and two major bridges with commercial and pedestrian traffic, he said. Because of the rapidly growing population in Laredo, Altgelt said the number of parks have doubled but the number of park law enforcement resources has not changed. “This is both a local problem and a federal problem,” he explained. Altgelt is taking steps to get both levels of government to step up to their obligations to the people who live in this area.

In a letter to Agent Edward Sanchez with the North Laredo Border Patrol Sector, Altgelt wrote:

As previously stated, there have recently been multiple eye-witness accounts of aliens entering illegally into the park from the river with large packages harnessed to their backs running towards waiting vehicles which then speed off through the neighborhoods with their loads, all in plain sight of parents and children.

At this time I am making a formal request that the necessary assets be detailed and allocated to this high impact drug trafficking area whether it be from a deterrent, enforcement, and/or disruption angle.

He went on to request information relating to apprehensions in the area of the park and the surrounding neighborhoods and business areas.

To the City of Laredo, Altgelt wrote a similar letter asking Jesus Olivares to increase the Laredo police resources in the park and surrounding areas. This was in addition to similar requests that were made of the U.S. Border Patrol.

“The city has left itself vulnerable,” Altgelt expressed in an exacerbated voice. He said the city just has not adjusted to the growth and increasing drug smuggling issues. “We are systematically failing our citizens,” he stated.

Altgelt praised the work of individual Border Patrol agents and police officers. “They are not the problem,” he explained. “The problem is management will not provide the leadership and resources necessary for these men and women to do the job they so want to do.”

Breitbart Texas spoke with U.S. Border Patrol Agent Hector Garza in his role as president of the local chapter of the National Border Patrol Council. “This area is just out of control,” Garza said. “We simply do not have enough resources to be effective in this area.”

Garza said there need to be camera towers installed in the park and along the rivers to make their manpower resources more effective in being able to respond to actual events as they happen. He also said they need to clear the terrain of the cane fields that grow along the river so that smugglers cannot hide in the tall grassy areas. 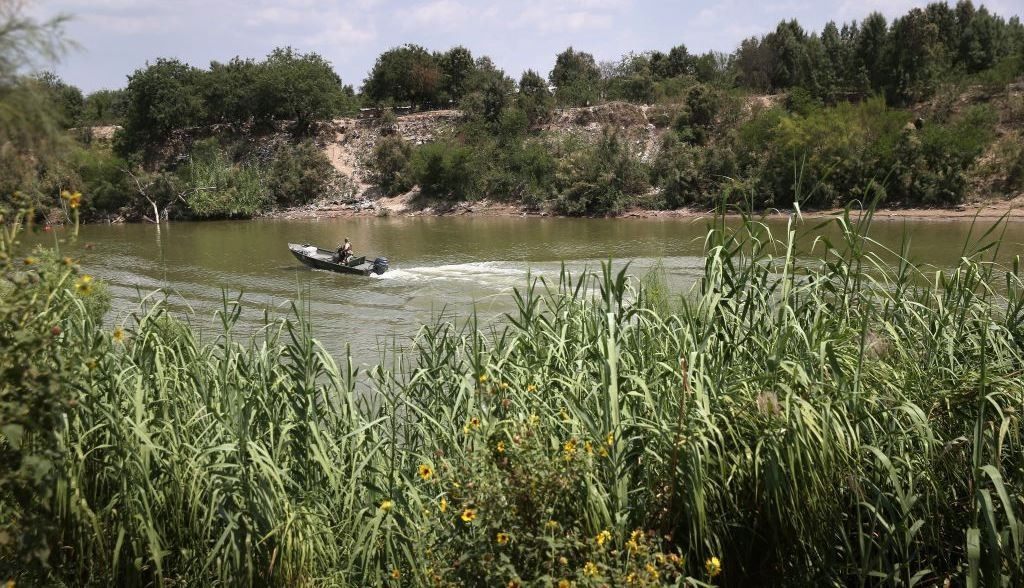 Altgelt pledged to keep working on the issue. He has requested a meeting between the city police, Webb County Sheriff’s Office and the Border Patrol to try and come up with a plan. “They are using our residents as cover and human shields so they can blend in when they deliver their loads,” he said. “It is very frustrating and our residents do not understand why it isn’t stopped.”

Bob Price serves as associate editor and senior political news contributor for Breitbart Texas and is a member of the original Breitbart Texas team. Follow him on Twitter: @BobPriceBBTX.