Lubbock Mayor Glen Robertson toured the U.S.-Mexico border with Border Patrol agents and Breitbart Texas Director Brandon Darby. Despite heavy rainfall, Robertson got a first-hand look at just how wide open the border is and what agents have to deal with in attempting to secure our border. Robertson is currently in a primary runoff for the Texas CD-19 seat left open by retiring Randy Neugebauer and the mayor has emerged as a champion for the Border Patrol agents’ cause.

The tour of the border followed Robertson’s announcement last week where he committed to giving a megaphone to the men and women who are the boots on the ground along our borders. “The actual Border Patrol agents should sit at the head of the policy-making table,” the Lubbock mayor said in a statement first reported by Breitbart Texas. “The border security policies I fight for will reflect the expertise and advice I receive from them. They will have an advocate like never before and I will honor them to the best of my abilities. Not only will I support the legislation the Border Patrol agents say they need, I will introduce and fight for legislation they say they need.” 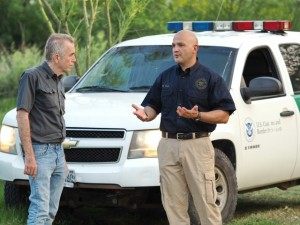 Robertson was invited to the border area near Laredo, a high-profile drug smuggling and human trafficking area controlled by the ruthless Los Zetas drug cartel, by National Border Patrol Council Local 2455 President Hector Garza and Breitbart Texas. Garza represents the men and woman who routinely put their lives on the line to try and shutdown the efforts of these deadly cartels.

The Lubbock mayor told Breitbart Texas he decided to tour the area because the region “is a wide open mess that must be secured immediately.”

“As a candidate for Congress, I wanted to witness the situation first hand and hear from our Border Patrol Agents,” Robertson said in a written statement obtained by Breitbart Texas. “I plan on visiting other sectors in the future to learn more about the challenges our brave Border Patrol Agents face on a daily basis.” 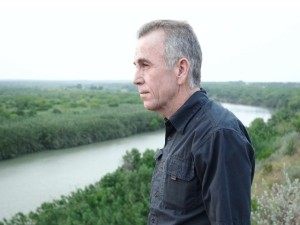 Glen Robertson Looks Out Across the Border near Laredo.

Border Patrol Agent Hector Garza spoke to Breitbart Texas in his role as President of Local 2455 for the National Border Patrol Council (NBPC). He stated, “It is very unusual for a candidate for office, especially someone from as far away as the opposite end of the state, to take time outside of their campaign area to actually come look at what we face on a daily basis. My goal was to give him a look at what the border is really like, not the dog-and-pony show the Border Patrol bureaucrats usually put on during VIP tours.”

“We face real issues here,” Agent Garza continued, “from something as simple as trying to get enough manpower and equipment to do our jobs to something as complex as trying to protect our agents from the very real dangers they face on a daily basis.”

“The border is more porous than I imagined,” Robertson told Breitbart Texas in an interview on Tuesday. “More shocking than surprising is how low the moral level is due to the fact their own federally-appointed commissioner not only has their hands tied behind their back but seems to be attacking his own troops.”

“I was also surprised at just how little resources these men and women actually have,” Robertson continued. “The manpower issues alone not only present a security issue to our nation, but put our agent’s lives at risk because low staffing numbers often mean backup for an agent can be a long time coming.”

“It is very important that our national leaders hear directly from the front-line troops that are doing the job we ask them to do,” he continued. “That is why I have pledged to give them the megaphone they deserve. They are the only ones telling what really happens, or more importantly, doesn’t happen in regards to border security.”

“I am shocked at just how infrequently elected officials, let alone candidates for office, actually come down here to see for themselves what the border is like,” Darby said. “This is not the tour the Border Patrol leadership puts on for people they want to impress. On this tour, leaders get to hear directly about the issues faced in stopping the threat caused by our wide open borders.”

The night after Robertson completed his tour, Breitbart Texas went back out to some of the same areas toured by the Lubbock mayor and witnessed two Los Zetas cartel members attempting to cross the river with a load of human cargo.” This is a frequent occurrence in this sector where there are no man-made barriers to secure the border,” Darby explained. “Only a narrow stretch of river, easy to cross by these smugglers, separates the U.S. from these drug smugglers, human traffickers and people from countries in the Middle East who might want to do harm to America.”

Darby added, “Mayor Robertson agreed to come secretly to the border so he could see the reality. His flight was cancelled due to horrible weather and he drove over eight hours to get here through that weather. He didn’t see the fake border tour that most politicians see when they announce their trip to politically appointed leaders in the Border Patrol agency. The mayor saw what Border Patrol agents actually deal with and he listened to the voices of those agents with the NBPC. The NBPC is the only voice the agents have to counter the spin from bureaucrats in Washington.”