An exclusive report obtained by Breitbart Texas reveals that nearly 1,800 police officers have lost their lives in the line of duty over the past 10 years. That number includes the deaths of 160 K-9 officers.

The report, compiled by SAFEHOME.org, reviewed statistics from FBI crime figures and memorials from the Officer Down Memorial Page (ODMP) from 2006 through 2016.

This year alone, 116 officers and 29 K-9 officers have given their lives in the line of duty, the report’s sources detail.

Over the 10-year period covered by the SAFEHOME report, the deaths of officers and K-9 officers has struck every state in the nation at least one time.

Harris County Sheriff Ron Hickman suffered the loss of one of his deputies in August 2015 when Deputy Darren Goforth was brutally ambushed at night. The deputy was shot in the head and back nearly 15 times, allegedly by Shannon Miles, Breitbart Texas reported. 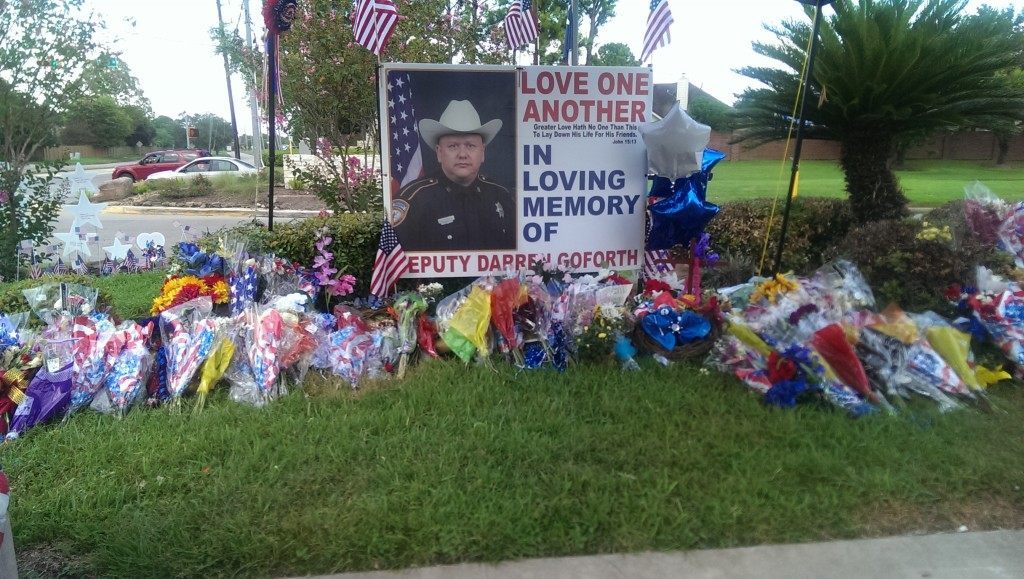 “Line of Duty Deaths strike at the heart of us as peace officers and represents the ultimate sacrifice as public servants,” Sheriff Hickman told Breitbart Texas in an exclusive interview.

“Clearly the past couple of years have been traumatic ones for law enforcement,” Sheriff Hickman stated. “These two years represent a change in the historic trends in line of duty deaths. Direct and unprovoked shootings of officers are a divergence from deaths from confrontations. Fortunately, the improvements in tactical gear and ballistic vests coupled with improvements in trauma care have combined to help reduce the number of fatalities.”

“The SAFEHOME Research clearly identifies and categorizes the greatest dangers officers face across the country,” the sheriff of Texas’ largest sheriff’s office expressed. “Hopefully, as we continue to develop our dialog with the community, we will be moving to reduce officer line of duty deaths at the same time.” 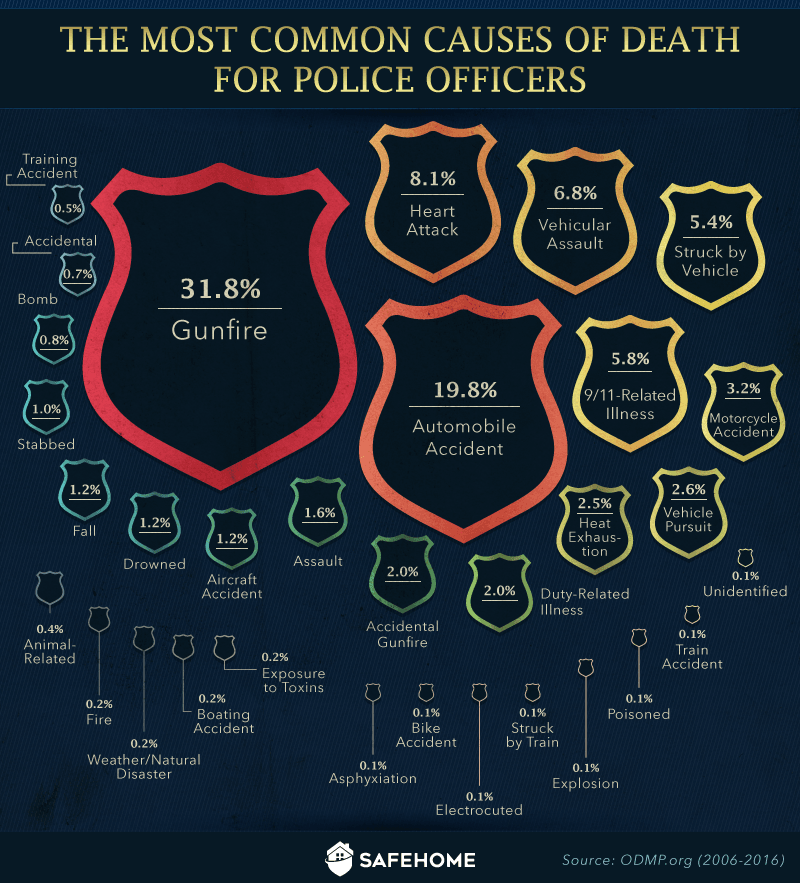 Deaths by gunfire were the number one cause of officer deaths over the ten-year period, the report states. Nearly 32 percent of officer line of duty deaths came from gunfire. Automobile accidents were the second highest cause of deaths at 19.8 percent.

This year, 52 officers have been shot and killed by suspects. This is a massive increase over last year’s 39 gunfire deaths. In addition to the shootings, two more officers were accidentally killed by firearms. 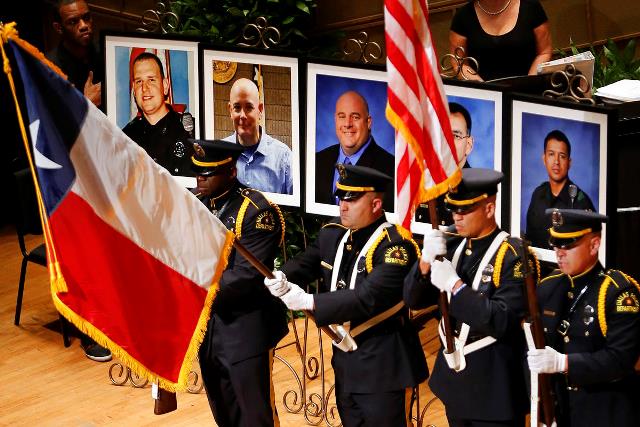 In 2016, Texas led the nation in the number of line of duty deaths following the murders of 5 Dallas-area police officers this summer by Black Lives Matter sympathizer Micah Xavier Johnson. 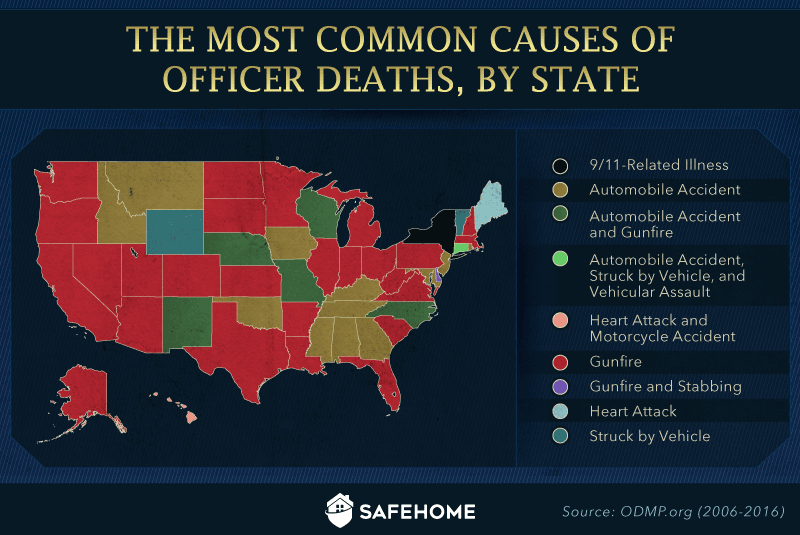 Over the ten-year period of the report, southern states have led the nation in officer deaths. Mississippi ranked as the most dangerous state for officers after losing 7.68 officers per 1,000. Nevada rounded out the top-ten list with 2.9 deaths per 1,000 officers.

Police officers are the most likely type of law enforcement officers to die in the line of duty, SAFEHOME reported from ODMP statistics from 20016 to 2016. Police officials holding the rank of “Officer” made up 30.56 percent if duty related deaths, the report states. This was attributed to the types of calls assigned to these officers. 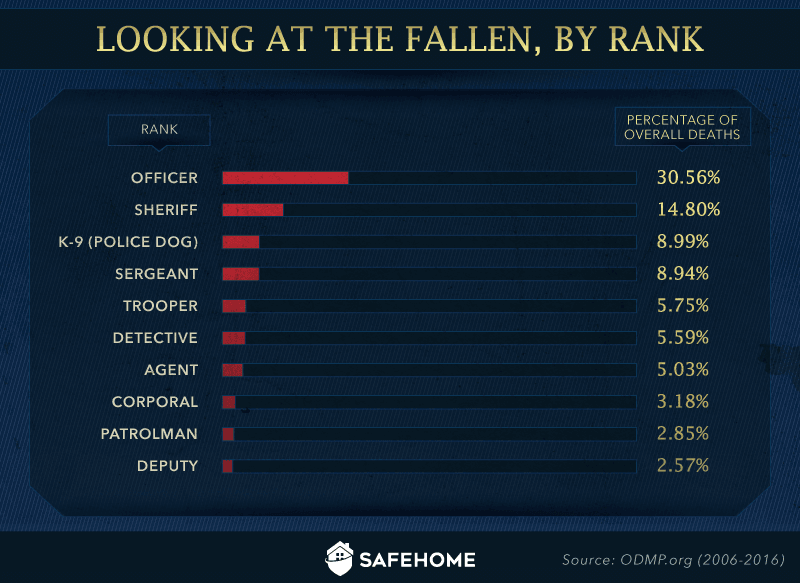 Oddly, those holding the rank “Sheriff” made up the second highest percentage of line of duty deaths at 14.8 percent. Sheriffs’ Deputies made up only 2.57 percent of the deaths over the ten-year period of the report. 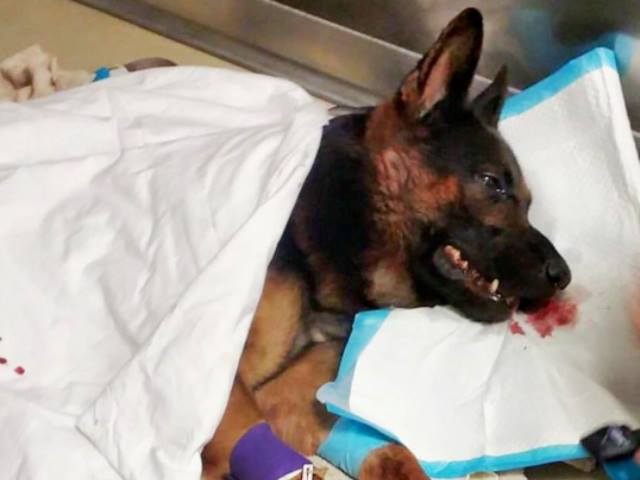 K-9 Officer Jethro was fatally wounded in January after being shot by a burglary suspect.

K-9 officers made up the third highest percentage at 8.99 percent of law enforcement line of duty deaths. In 2016 year to date numbers, 29 K-9 officers have died in the line of duty. Unfortunately, this number is also up from the 2015 total of 27 K-9 officer deaths.

Kristi Schiller is the founder of K9s4COPs, a non-profit organization that assists police departments with obtaining canines for training.

“Police canines are an invaluable tool in crime deterrence and law enforcement,” Schiller told Breitbart Texas in an exclusive interview. “These canines are often placed in the most dangerous of circumstances with their partner as they are typically searching for armed criminals that have eluded regular law enforcement. By the nature of the individuals canines are utilized to locate and apprehend, this puts them and their partners at a higher risk of injury or death.” 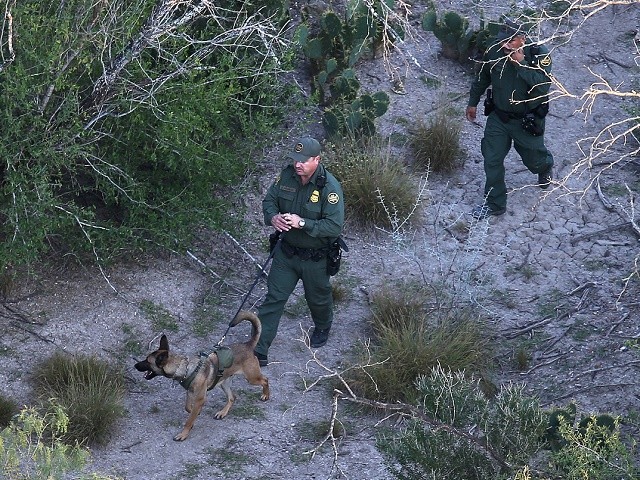 “As I cringe when I hear of any canine being injured or killed, we at K9s4Cops take some solace in the fact that K9s have saved numerous officers lives not to mention their noses are up to a quarter of a million  times stronger than a human nose,” she explained. “K9s4COPs canines have had a direct impact of removing over $160 million off the street in contraband, cash and narcotics and assisted in over 4000 arrests —  I never want a department to be in need of something my organization can provide. Canines are the most loyal partner an officer can ask for, they never call in sick, and are always ready to work. And they do all this for the love of their partner and the joy of a tennis ball!”

Schiller cited the deaths of K-9 officers in Ohio, Texas, and California. Internationally, K-9 officers have been killed in terrorist attacks as well, she stated. “We try to immediately soften that blow by reaching out to the department to see where we can assist in keeping their canine unit intact,” Schiller said.

“Police canines are an invaluable tool in crime deterrence and law enforcement,” Schiller concluded. “These canines are often placed in the most dangerous of circumstances with their partner as they are typically searching for armed criminals that have eluded regular law enforcement. By the nature of the individuals canines are utilized to locate and apprehend, this puts them and their partners at a higher risk of injury or death.”

Despite the number of deaths of officers and their K-9 partners, police work is safer today than it was 10, 20, or 30 years ago, the SAFEHOME report concludes.

“Of course, the job is still dangerous, and fatalities are still a tragic and ever-present reality,” SAFEHOME stated. “Even one police death is one too many. But the strategies in place to reduce these numbers appear to be working, slowly decreasing fatality danger each year.”