Harris County Precinct 3 Assistant Chief Deputy Clint Greenwood cried out for help after being shot behind the courthouse in Baytown, Texas (east of Houston). “I’m bleeding out,” Greenwood exclaimed on a radio call for assistance, KTRK ABC13 reported. 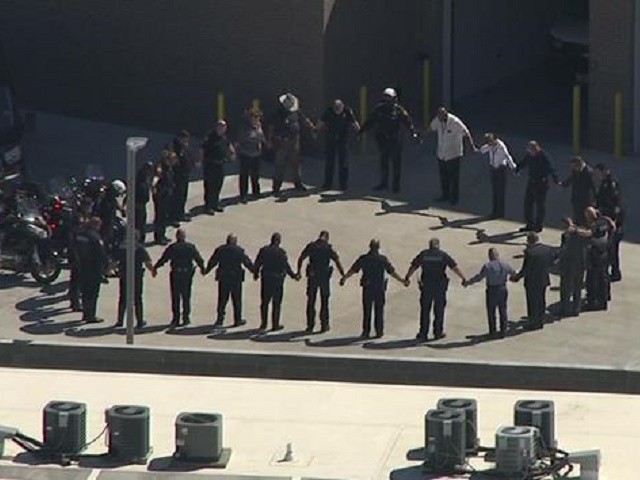 An as yet unidentified killer shot Chief Greenwood in the neck. Another deputy rushed to his assistance. The deputy applied pressure to his chief’s wound and held it while awaiting medical assistance. A Life Flight air ambulance took the mortally wounded law enforcement officer to Memorial Herman Hospital. He died shortly after arriving at the hospital.

The assailant fled the scene and remains at large, officials reported. Other nearby government buildings and schools locked down their facilities as a safety precaution.

Officials stated the 31-year veteran was on his way to work when the gunman approached and fired the fatal wound, Click2Houston reported.

“It’s very early on in the investigation. What I can tell you is that we have the full force of the Baytown Police Department working the case along with members of the (Harris County Sheriff’s Office), the Texas Rangers, the Precinct 3 Constables Department and the Gulf Coast Violent Defenders Task Force,” Baytown Police Lt. Steve Dorris told reporters.

Greenwood previously served as a major in the Harris County Sheriff’s Office. He commanded the Executive Bureau under then-Sheriff Ron Hickman.

“Clint Greenwood was a great guy and this terrible tragedy is a loss to the greater law enforcement community, but more poignantly, to his wife and family,” Sheriff Hickman told Breitbart Texas Monday morning. “As a friend for over twenty years, I knew Clint to be a good family man, a good lawyer, and a passionate peace officer. His wife and family continue to be in our prayers as they search for answers. He loved all things firearms and was a competitive distance shooter at one time.”

Texas Governor Greg Abbott expressed, “My heart goes out to the family and friends of Assistant Chief Deputy Greenwood and the Harris County law enforcement community in the wake of this heinous murder,” Texas Governor Greg Abbott said in a written statement obtained by Breitbart Texas. “Texas is taking action to strengthen penalties for those brazen enough to commit crimes against law enforcement, and we will send a message that such vile acts will not be tolerated in the Lone Star State. I am confident the perpetrator of this despicable act will be apprehended and that the murderer will be met with swift justice.”

“Jan and I send our thoughts and prayers to the friends and family of Assistant Chief Deputy Greenwood, a 30-year law enforcement veteran, during this very difficult time,” Lt. Governor Dan Patrick said in a written statement. “Violence against our law enforcement officers must stop. Protecting our men and women in uniform continues to be a top priority for me and I will do whatever it takes to bring this latest assassin to justice.”

Texas Attorney General Ken Paxton also released a statement that read, “The thoughts and prayers of all Texans are with the family of Deputy Constable Clint Greenwood, who has died from a gunshot wound in Harris County. My office stands ready to assist in any way possible. This is a reminder to pray for and support all law enforcement officials in our state, especially at this time of grief.”

“We’re going to do everything we can to make sure that we track down whoever was responsible for this. We’re going to stand united in this and we appreciate all of the collaboration that we’ve seen this morning, the show of support from the community and the law enforcement community for having lost a fellow law enforcement officer this morning,” Harris County Sheriff Ed Gonzalez stated.

“I am sickened and profoundly saddened by the brutal killing of Deputy Greenwood this morning. My thoughts and prayers go out to his family, of course, and to all the men and women who surround us and protect us from similar acts of lawlessness and brutality,” Harris County Judge Emmett said.

Assistant Deputy Chief Greenwood is the 33 law enforcement officer to die in the line of duty this year. He is the 11th officer to die from gunfire, according to the Officer Down Memorial Page.

UPDATE: Crimestoppers and the Office of the Texas Governor have teamed up to offer a total of $65,000 for information leading to the arrest of the suspect involved in the murder of Chief Greenwood.