Weather officials warn of possible catastrophic rainfall as Hurricane Harvey bears down on the central Texas coast. The storm is expected to be a Category 3 hurricane by the time it makes landfall Friday afternoon.

Hurricane Harvey would be the first Category 3 hurricane to hit the U.S. mainland in the past 12 years. It is expected to bring up to 30 inches of rain in parts of the central Texas Coastal Bend region. Heavy seas and tidal surges could also cause significant damage along the shoreline. Hurricane Harvey is expected to make landfall Friday afternoon near Corpus Christi, Texas. 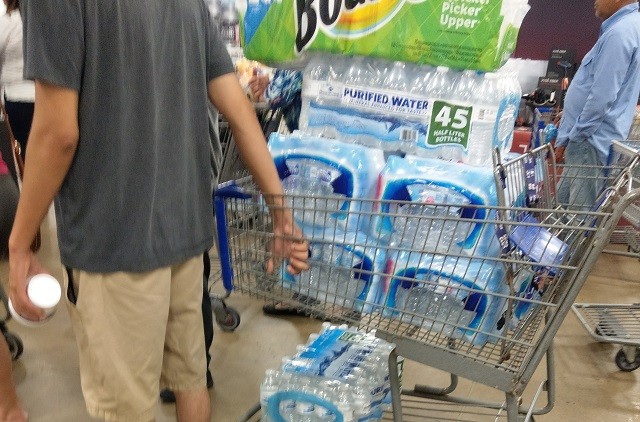 Texans stocking up on water and supplies in advance of Hurricane Harvey. (Photo: Bob Price/Breitbart Texas)

A Category 3 hurricane delivers sustained winds of at least 111 mph. Harvey is expected to be at that level by the time it comes ashore in Texas.

Texans are making preparations to shelter in place or move to higher ground in anticipation of strong winds, heavy seas, and massive rainfalls that will cause flooding in the relatively flat region along the coastline.

Corpus Christi Mayor Joe McComb warned flooding may be the biggest danger from Harvey.  “I hope people will listen to forecasters when they say ‘beware of flash floods,”‘ Mayor McComb told reporters. “Flash floods can come quickly, and they can be deadly.” 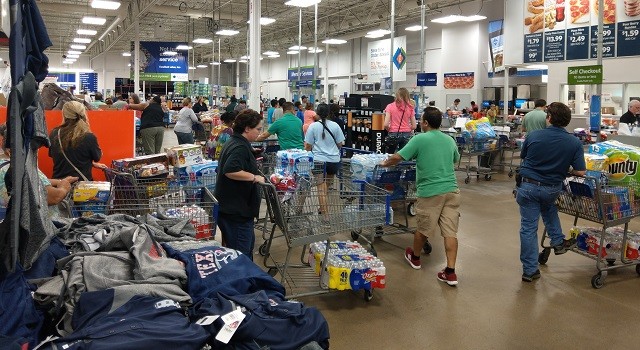 The Thursday noon update from the National Hurricane Center reports:

As of the lasts report, Hurricane Harvey has maximum sustained winds of approximately 65 mph. The storm is located at latitude 24.0 North, longitude 93.3 West and is moving north-northwest at about 10 mph. Its forward speed is expected to decrease as the storm approaches the coast. Landfall is expected for Friday afternoon around Aransas Pass, Texas. 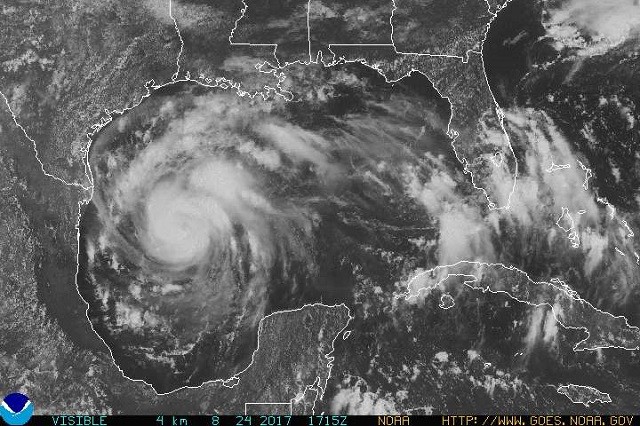 Tropical-storm-force winds currently extend about 90 miles from the center of the storm.

Weather officials state that some isolated areas could experience as much as 30 inches of rain. Most areas can expect to receive between 12 and 20 inches which will cause serious flash floods and regional flooding as the rain attempts to find its way back to the Gulf of Mexico.

The combination of a dangerous storm surge and the tide will cause normally dry areas near the coast to be flooded by rising waters moving inland from the shoreline. The water is
expected to reach the following heights above ground if the peak surge occurs at the time of high tide…

The deepest water will occur along the immediate coast near and to the northeast of the landfall location, where the surge will be accompanied by large and destructive waves. Surge-related flooding depends on the relative timing of the surge and the tidal cycle, and can vary greatly over short distances. For information specific to your area, please see products issued by your local National Weather Service forecast office.

“Texans believe in taking action and always being prepared in the event of an emergency,” Governor Abbott said in a statement obtained by Breitbart Texas. “That is why I am taking every precaution prior to Tropical Depression Harvey making landfall. Preemptively declaring a state of disaster will allow Texas to quickly deploy resources for the emergency response effort in anticipation of the storm’s hazardous conditions.”

School closures are anticipated for Friday and perhaps Monday, depending on the path of the storm.