Homan appeared on Fox News and reported the impact of an aggressive border security/immigration enforcement policy. “Under this president, who’s now letting us do our job and taking the handcuffs off the men and women of the Border Patrol and ICE, arrests are up,” Homan told Sandra Smith on Fox News’ “America’s Newsroom.”

“The overall removals are down because the Border Patrol has reported a 45-year low in illegal border crossings.”

U.S. Customs and Border Protection, the parent agency for U.S. Border Patrol agents, issued a report showing that apprehensions of illegal immigrants crossing the border between ports of entry fell in FY 2017 by 26 percent. Apprehension fell from 408,870 in FY 2016 to 303,916 in FY 2017, Breitbart Texas reported. This represents the lowest number since 1972, Homan stated on Fox News.

The report, however, showed an increase in border apprehensions each of the last five month–rising 103 percent during the period. 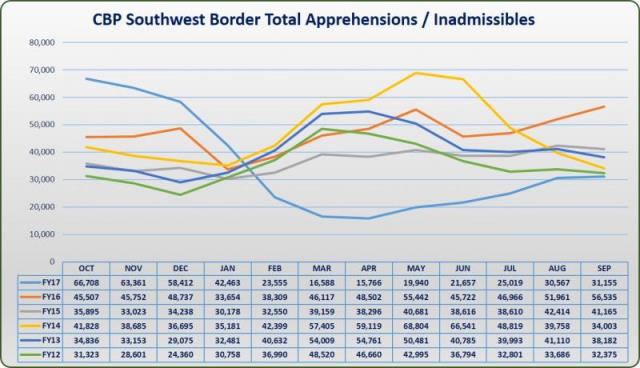 The ICE director said the drop in illegal border crossings is the direct result of the emphasis on border security and immigration enforcement from President Trump. The chart above reflects this, showing a dramatic drop from December through April and the Trump Administration transitioned into office.

“That’s why overall deportations are down,” Homan told Smith. “However, if you look at ICE deportations, people that are arrested in the interior and were removed, those numbers are up almost 40 percent.”

Homan noted that ICE actually deported fewer people in 2017 compared to the previous year because the of the decreased number of illegal crossings. Deportations declined six percent from the prior year to 226,000 people. The director noted that interior immigration enforcement is also up this year by 42 percent with more than 110,000 foreign nationals being arrested.