Border Patrol agents at a South Texas immigration checkpoint found 25 illegal immigrants packed by human smugglers in the back of a tractor-trailer. Those included an MS-13 gang member and an unaccompanied child.

Agents assigned to the Falfurrias Border Patrol checkpoint, located 80 miles north of the Texas-Mexico border, observed a tractor-trailer approaching for inspection. A K-9 agent alerted to the possible presence of drugs or human cargo in the trailer and agents forwarded the driver to a secondary inspection station for further investigation, according to information obtained by Breitbart Texas from Rio Grande Valley Sector officials.

The agents conducted a physical inspection of the trailer and found 25 illegal immigrants hiding under tarps. The agents removed the migrants and transported them to the Falfurrias Station for processing. 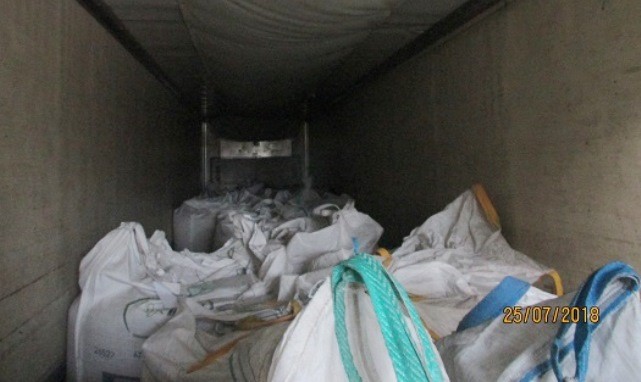 During a biometric background investigation, agents learned that the 25 came to the U.S. from El Salvador, Guatemala, Honduras, and Mexico. One was determined to be Salvadoran who is also a member of the hyperviolent transnational criminal gang known as MS-13. Also found inside was an unaccompanied minor.

Agents referred the case to investigators for possible prosecution on charges related to human smuggling. They could face prosecution for immigration violations before being deported to their countries of origin.

The driver, a 55-year-old man, was taken into custody and the tractor-trailer was seized. Officials did not disclose the nationality of the driver.

Officials in the Rio Grande Valley Sector operate several programs to attempt to reduce human smuggling and the associated deaths of illegal immigrants. Saying, “They’re humans, not cargo,” officials carry out “Operation Big Rig” and “No Se Arriesgue” as part of their efforts to save lives.

As of the date of this publication, at least 178 illegal immigrants have died along the U.S.-Mexico Border region, according to the Missing Migrant Project. Of those, at least 115 died in Texas — 34 in Brooks County, where these migrants were found.