Tucson Sector Border Patrol agents arrested a group of 163 migrants who illegally crossed the border from Mexico into the Arizona desert.

During a routine patrol of the border, Ajo Station agents came upon a group of illegal immigrants who crossed the border several miles west of the Lukeville Port of Entry on Saturday morning. The group of 163 comprised of men, women, and children–including a four-month-old infant, Tucson Sector Border Patrol officials stated. The temperature on Saturday was well into the 90-degree range at the time of the arrest and would hit a high of 106 degrees by late afternoon, according to Weather Underground.

“Transnational criminal organizations exploit the vulnerability of foreign nationals with false promises of legal status and encourage dangerous border crossings, which place lives at risk,” Tucson Sector Border Patrol officials said in a written statement obtained by Breitbart Texas. So far this year, nearly 280 have died attempting to illegally make their way to destinations in the U.S., according to the Missing Migrants Project. Nearly 80 of those died in southern Arizona.

Tucson Sector officials reported that five of the adults arrested in the group had previously been deported from the U.S. They can be charged with illegal re-entry after removal, a felony. If convicted, the repeat offenders could face up to 20 years in federal prison.

The group came to the U.S. from El Salvador, Guatemala, and Honduras, officials stated.

The Ajo Station agents evaluated all 163 and determined they were in good health at the time of their arrests on Saturday morning. Following the medical evaluation, agents transported the group to the Ajo Station for processing on immigration violations and for biometric background investigations. 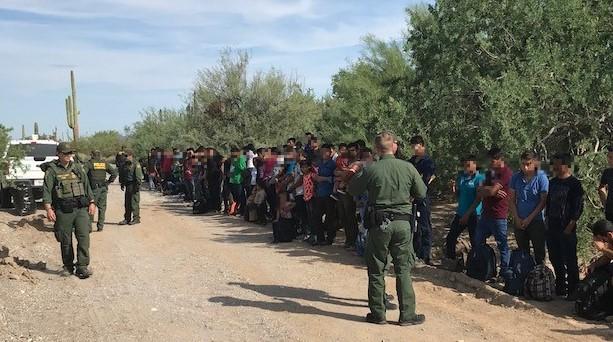 This is the second large group arrested in the same area over the past few weeks. On August 17, Tucson Sector officials reported 128 migrants a few miles west of the Lukeville Port of Entry. This group also contained children as young as four-years-old. Several of the adult members had previous immigration violations.
Tucson Sector officials are seeing a significant increase in the apprehension of families and unaccompanied minors this year. The arrest of Family Unit Aliens increased from 1,755 in FY 2017 to 3,431 in FY 2018 — an increase of 95 percent. Unaccompanied Alien Children apprehension rose by 44 percent from 2,994 in FY 2017 to 4.323 in FY 2018, according to the July Southwest Border Migration report.