San Diego Sector Customs and Border Protection officers seized more than a ton of methamphetamine in two shipments of cacti. The busts in less than a week yielded seizures valued at nearly $4 million.

CBP officers assigned to the Otay Mesa cargo facility on August 7 observed a tractor-trailer approaching from Mexico. The cargo manifest indicated a shipment of cacti, according to information obtained from San Diego Sector CBP officials. The officers referred the driver to the inspection area and ordered the cactus to be unloaded from the trailer. 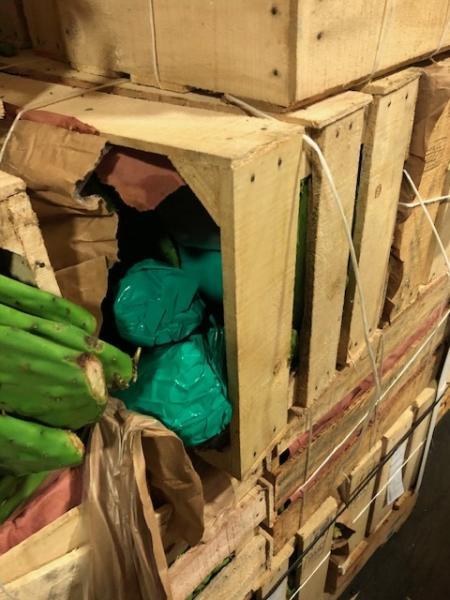 During the initial inspection, a CBP K-9 walked through the unloaded pallets and alerted to an odor it is trained to detect. The officers search the crates of cactus pads and found packages wrapped in green tape. The smugglers wrapped the packages in green tape in an apparent attempt to camouflage the drugs.

Officers found 590 tape-wrapped packages containing 668 pounds of methamphetamine. The officers seized the drugs and the tractor-trailer. Officials estimated the value of this seizure at $1.5 million.

Officers observed a tractor-trailer approaching from Mexico for entry into the United States. The driver’s manifest again indicated a truckload of cactus. The officers referred the driver to a secondary inspection station, according to a CBP statement.

During an initial screening, a CBP K-9 alerted to an odor it is trained to detect. The officers unloaded the shipment and began a physical inspection of the pallets of cactus crates. During the inspection, the officers found 1,098 packages wrapped in green tape.

The officers found 1,464 pounds of methamphetamine in the taped packages with an estimated street value of approximately $3.3 million, officials stated.

So far this year, CBP officers in Southern California stopped more than 62,000 pounds of methamphetamine from entering the United States.

“Incidents such as this highlight the great work by our CBP officers who continue to expedite legitimate trade and travel while interdicting significant violations that would harm our community,” CBP Officer in Charge Joseph Misenhelter said in a written statement. “An example of our layered enforcement approach – initial screening, use of non-intrusive technology, canine examination, and physical examination all play a part in how we keep America safe.”

Officers arrested the 48-year-old U.S. citizen driver and seized his truck and cargo. He will now face federal drug smuggling charges following the completion of an investigation by ICE Homeland Security Investigations agents.