On August 24, a video was released by U.S. Customs and Border Protection Chief Patrol Agent Aaron M. Heitke from the San Diego Sector. The video showed a panga boat landing on the beach in Encinitas, California. Over a dozen people can be seen scrambling into a local neighborhood.

Monday, a panga landed in Encinitas & 13 individuals quickly made their way into the community. #BorderPatrol agents & partners arrested all 13 people, the smugglers, meth, & a “ghost-gun.” Criminals involved in human smuggling also traffic in drugs & firearms. 1/2 pic.twitter.com/CmxFjiNAl8

The video also provides a glimpse on the use of these boats in smuggling and trafficking operations along the California coast. This event also highlights a change in tactics. Normally, smugglers either transport drugs, people, or weapons. Today, it is common to see multiple illicit commodities smuggled at once.

Panga boats–also known as a shark or fishing boats–are used extensively by both smuggling and trafficking organizations in the Gulf of Mexico and on the California coast. The crafts have become more prevalent in recent years due to improvements in land border security.

Commissioner Mark Morgan recently tweeted statistics for maritime smuggling operations along the west coast. In one month, CBP stopped multiple smuggling attempts including the seizure of 1,469 pounds of narcotics and 23 illegal immigrants.

In mid-August, law enforcement intercepted a panga at Arroyo Quemada Beach west of Santa Barbara. This led to the arrests of 33 people and seized 3,164 pounds of methamphetamine–what the Santa Barbara Sheriff’s Office described as one of the largest in the county’s history.

On August 7, a CBP aircraft spotted a panga traveling north with no navigational lights and numerous people aboard. As the boat continued moving north into U.S. waters, the aircrew guided a San Diego marine boat unit to intercept. This led to the apprehension of 19 people who illegally entered the United States. 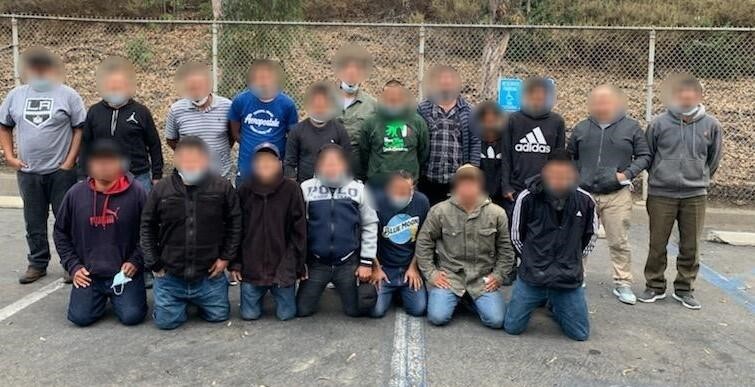 In early July, 21 people were arrested after a CBP aircrew spotted two pangas cross from Mexican to U.S. waters. The aircraft directed a CBP maritime crew to intercept one and the Coast Guard took the second.

Once the CBP boat reached the first panga, it failed to yield. Agents were forced to fire two warning shots. Agents then fired a round at the panga’s engine about five miles from Point Loma, according to local reports.

In early March, the Coast Guard located a panga heading toward the area between Gaviota Beach and Hollister Ranch and notified the Santa Barbara County Sheriff. Deputies located a 50-foot boat with smugglers in the process of unloading. Twenty people were arrested and 5,300 pounds of marijuana plus 40 gallons of marijuana crude oil were seized, according to a local report.

Smugglers are also moving farther out to sea and up the coastline. Pangas washing ashore or seized tripled off the California coast in 2013. In 2014, they began to appear in Monterey Bay.