After Stewart-Cousins called on Cuomo to resign, Co-host Victor Blackwell asked, “[W]e know that he’s not going to resign. He has signaled that in the recorded statement that played earlier. So, now the question is of impeachment. Do you support moving forward on impeachment?” 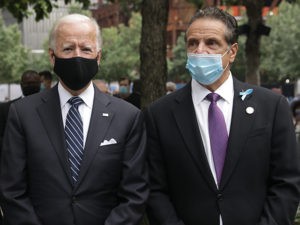 NEW YORK, NEW YORK – SEPTEMBER 11: Democratic presidential nominee Joe Biden (center), Dr. Jill Biden (left) and New York Gov. Andrew Cuomo (right) attend a 9/11 memorial service at the National September 11 Memorial and Museum on September 11, 2020 in New York City. The ceremony to remember those who were killed in the terror attacks 19 years ago will be altered this year in order to adhere to safety precautions around COVID-19 transmission. (Photo by Amr Alfiky – Pool/Getty Images)

Stewart-Cousins responded, “Well, I would certainly support the Assembly moving forward on impeachment. It does not happen — it’s very much like the Congress. The Senate — so, the Senate would act on the impeachment. But certainly, I think the Assembly will take a look at the facts, and hopefully, if that’s the way to do it, then move forward with that.”

She added that impeachment is “certainly a way to go.”